I used to do a lot of work with my late mother in her garden which had and still has a lot of woody shrubs. We reduced the prunings to small lengths so that the stuff would fit into the green bin or sacks.

I bought a shredder for a variety of reasons. I think the principal reason was to aid composting, reducing the twiggy element of the final product, partly out of curiosity, partly to speed and aid the composting. It was also after KG did a review of shredders last year. I did not find this particularly helpful, I confess, I would have liked to have received more information; about why shredding is helpful, more about the variety of mechanisms and if this affects how the resulting product.

The one I bought has as its key component a spinning disc with blades, much like a food processor. And similarly a feed tube is there to keep your fingers sway from the business parts. Other machines must operate differently, I can see that a mangle type, crushing the material put through would work quite well, particularly if the rollers are serrated would prepare material for composting very well and be operable by .hand. Useful on the plot where there is no power. Some of the machine pictured in the KG article look as if their mechanism is like that of a paper shredder.

The machine I bought has a tall feed chute (funnel in the manual) and obviously a waste chute too. Both are sized and shaped to keep your fingers well away from the business section. The machine can be opened, with an interlock, allowing you to clear the chutes. Safety is thoroughly covered with an overload/blockage circuit breaker.

The whole item has three legs which are easily removable and then the beast will fit into the boot of my small car.

Some material is shredded better than other; raspberry canes and forsythia (long, straight lightly leafed) shred with ease, much branched material needs to be trimmed into straighter sections and heavily leafed material blocks, either in the feed chute or in the waste chute. The trimmings from the over-hanging Leylandii hedge did this, particularly once the machine was warm. The feed chute looks as if it is designed for use with a pusher/plunger as it has a keyhole shape but no such item is mentioned in the instructions. The waste chute needs work to reduce the blockages caused by the more fleshily green material (which is shredded very fine) to exit more successfully.

Certainly one thing worth remembering is that sharp blades are far more successful than blunt ones. In my case these are not cheap at about £50 per set but at least they are double sided.

Overall, I am pleased with my £20 e-bay bargain, it must have cost a considerable amount when new. If I had paid full price, I might be disappointed.
0 x
Nothing is foolproof to a sufficiently talented fool.
Top

I sharpen my blades and haven't bought a new set yet. If you grow Sweet Corn they are fun to shred. I agree that Raspberry canes are easy and for a short while the compost smells wonderful unlike when I do the Brussels.
0 x
My Weather
Top

Geoff
I have sharpened the blades and although I have ordered a new set, I may put them onto the stone again. The side which were in place when I bought it were very worn, so much so that the edge was no longer straight. My observation about new blades is currently based on turning the blades around!
0 x
Nothing is foolproof to a sufficiently talented fool.
Top

After the recoil from my JCB impact type shredder left me with a painful thumb for six weeks, I replaced it with a Bosch "silent shredder". This has a sort of sharp gear like rotor acting against an aluminium plate to cruch and chop material. It shreds much better than the old one; I posted a 20' conifer through it (bar anything over 4 cm thick) on Saturday, which it chomped up into bits about 3/4" long with no apparent problem.
Blockages seem to occur mostly if you don't empty the collecting box in time !
Only faults seem to be that (a) it is not actually very silent and (b) the instructions say it is pre-adjusted, which it was not (But adjustment is easy). Oh, and it's a bit pricey.
0 x
Top

Our shredder (of Stephen's type) has just reduced ten thick, tall sunflower stems to lovely, compostable material. In the past, we found that these stems stayed unrotted in the compost for years and had to be repeatedly re-recycled! Anything straight works beautifully through the machine, but avoid things like long ivy trails!
0 x
Top

My e-bay bargain has, at last, been replaced. The principal issue with the design is blockage of the waste chute, particularly when processing softer or damper material.
I went to a retailler of serious machinery http://www.taylorstools.co.uk/, as I hoped they would provide better advice than B&Q or other warehouses. The only shredder at the domestic level which they recommended was the Stiga "Bio Silent 2500". https://www.stiga.com/int/290001252-14-bio-silent-2500.html It isn't silent, far from it but is quieter.
The biggest advantage is the straight through vertical material path, so it rarely gets blocked up.
It copes with woody material easily but is less good with leafy material. I'm currently shredding photinia cuttings. Like laurel and other waxy leaved shrubs, the leaves need to be shredded or macerated or they will take years to rot down.
It cuts with a broad toothed wheel cutting against an anvil. If you don't want the grinding of metal against metal, you end up not cutting right through materal, which is a reason it is so poor with leaves. I just hope that the waxy surface is sufficiently damaged for the composting process to start. I'm using these woody/waxy shreddings in a thick block against the bottom of a border fence, hoping to reduce weeds (ivy in particular) making its way through from the adjacent land.

Looking at it, I think the design lends itself to a cassette system, where different cutting mechanisms are used for different material. The teeth against an anvil is good for woody material but a mechanism like a paper shredder would work better for leaves.
0 x
Nothing is foolproof to a sufficiently talented fool.
Top

Looking at it, I think the design lends itself to a cassette system, where different cutting mechanisms are used for different material. The teeth against an anvil is good for woody material but a mechanism like a paper shredder would work better for leaves.

What a good idea, Stephen. We have a shredder which has done us well over many years, but it really only copes with straight and fairly stiff stuff like buddleia stems, tall herbaceous stems etc but just clogs up with softer things. Maybe you should approach a manufacturer with your idea?
0 x
Top

Hi Monica
The Stiga would lend itself to such a design. I suppose there is nothing to lose.
0 x
Nothing is foolproof to a sufficiently talented fool.
Top

Funnily enough I dug my shredder out at the weekend, mum bought it in the nineties for her 3/4 acre garden.
Had to do some coppicing of my big hazel stool at the bottom of the garden so I can replace the rotting fence panels this coming weekend.
It did fine with the hazel and later on with the summer pruning's off my two 12' espaliers.
But got completely blocked, blowing clouds of particles out of the chipper tube, when I fed it bramble and herby weeds.

Not my one - but same or similar model & vintage. 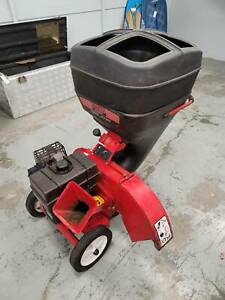 Sadly the very good engine is going to be an issue if anything breaks, it's a Tecumsah, who walked away from engine manufacture a decade or two ago. I lucked in last year with the cracked fuel tank as my tame machinery workshop happened to have a "take-off" from a go kart of a near identical engine - the fuel tank was exact fit.
1 x
Do not put off thanking people when they have helped you, as they may not be there to thank later.

Obviously I got no response to my suggestion, which I did send to Stiga.
I get more infuriated with the deficiencies. It made short and great work of simple things like raspberry canes, which are straight and firm.
Coping with more complex stuff, which has soft or flexible stems or inconveniently angled branches are difficult to manage. I certainly want to shed holly, laurel, photinia or magnolia grandiflora leaves and it only really bruises them.
0 x
Nothing is foolproof to a sufficiently talented fool.
Top

I too have Bosch silent type used it on brassicas/brussel stalks.

Users browsing this forum: No registered users and 4 guests