Planted out the Greenshaft Peas, Brussels Sprouts and Kalettes today - looks a bit more like something is happening.
0 x
My Weather
Top

Planted my "Early Onward" peas & "Streamline" runner beans.
Peas were started off using the guttering principal, when I came to put in car though the guttering was a bit to long.
Message to self "Cut guttering to fit car".
1 x
Top

I have only just sown my climbing beans Cobra and courgette Tuscany, still inside, considering at this moment it's just 6C outside. Broccoli Inspiration, kale Cavolo Nero and kalette seedlings are outside under netting in case of marauding wood pigeons which seem to have proliferated this year ....
0 x
Top

Ummmm, only allotment activity was that I treated my bindweed to a close up feed of weedkiller, longest strand was 18".

Got comprehensively hailed on on Saturday, once walking back from the allegedly "farmers" market in town and layer the de day while putting a fence back up for an elderly neighbour with dementia. Only about eight foot long with three posts all rotted off at ground level, then the schoolboys had been kicking it, her indoors and another neighbour caught one and made him apologise. Trimmed the rotten ends off three old angle iron posts with an angle grinder, whacked them in down the corner of each wooden post and stuck a coach bolt halfway up, renailed some loose boards.
Today I are been to town for TUBS to tidy up after a two day concert in the town park, then I are been replacing the hedge with a fence, it's died on neighbours side. Three fifty year old leylandii and one four foot concrete post removed and some old panels in 8place to keep my dogs at home. 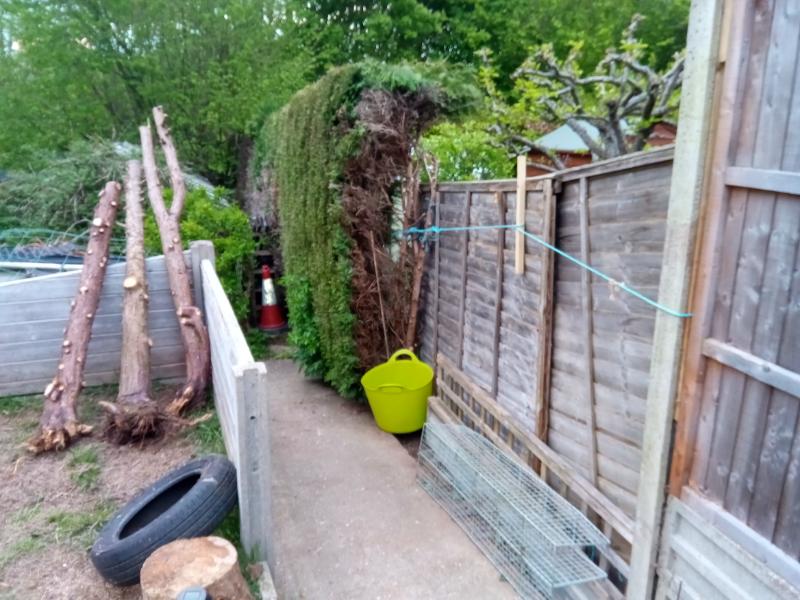 Wow - that's an impressive work load. And well done her indoors and neighbour for catching the little **** who was kicking the fence.

Although it's been cold here (Dorset coast) - last night I didn't fleece the bananas and they survived fine - as did the busy lizzies and geraniums I planted in the border (and then wondered if I'd been a tad rash!). The long range forecast for night-times is looking ok though so hopefully the risk of frost has abated in this area.
1 x
'Preserve wildlife - pickle a rat'
Top

Some things are growing outside, although a lot are under fleece, we are still getting temperatures close to freezing, I planted out some Broad beans yesterday that were outgrowing the cells they were sown in, haven't dared look to see how they are yet.
0 x
Been gardening for over 60 years and still learning.
Top

Everything outside is secured but this tunnel lark is confusing me big time -or is it my cheap 'A' min/max thermometer or some other secret - it goes from 1 or 2C to 25 - 30C ? The runners are happy with the scaffold netting all over & outside, the French beans ditto but they only have a border of scaffold netting around them, the lettuces seem OK under mesh but loads of no shows but loads also up. Tunnel has 3 cucumbers - no show, toms loving it, some sweet peppers enjoying it also but Chillies not so much, sweet potatoes looking perky but radish & spring onions not happy in either environment. So much to learn. I know it is the flux in temp some can't deal with & if that thermometer temp is correct it is the big difference that is the issue. Any advice welcomed, I will angst though when minimum says door closed but it is ventilation or something & door should be open, but I could change fixed door to mesh door! Basically I haven't researched enough, but also found nothing to adequately explain when to leave door open or closed.
0 x
Westi
Top

Picked my first Broad Beans this morning. Albeit a bit on the small side. In fact very small. But the taste.

I think they could be right about this Global Cooling....

Ne'er cast a clout till May be out

It doesn't say anything about putting extra layers on. Thinking of getting my Winter gardening polo necks back out to replace my shirts.

But if you go for the hawthorn interpretation, it is coming out rapidly so might be using the month as the meaning this year.

Got the swallows, heard the cuckoo but no sign of the swifts - sensible things.
0 x
My Weather
Top

Shallot Man wrote:Moved to a new House insurer last year, quiet cheap. Renewal has come in. %20 dearer. Would seem last year I was the sprat caught by the mackerel.Ah well. Time for this sprat to move on and be caught by another mackerel.

So this sprat shopped around. Found quote almost the same as last year. Then hit a problem, you needed a mobile phone. wouldn't accept a landline phone no:. Are well, found a new mackerel though had to pay 45p more.

The rain today was incessant, varying between drizzle and torrential. I got wet and am just drying out now, so I may nip up to the 'lottie and inspect things. I'll probably just weed things.
I

I had planned to put the fruit nets up. There are lots of currants forming, so it will be needed.
0 x
Nothing is foolproof to a sufficiently talented fool.
Top

Users browsing this forum: No registered users and 9 guests