Wow Geoff, that is a real harvest festival. Did you have to climb up trees to harvest all those apples or was there an easier solution? You're going to be eating an awful lot of apples over the coming weeks! As the saying goes, let' s hope that keeps the doctor away for many a long day ! . I agree with Pawty on the squash front. Crown Prince is way out front in terms of taste and texture in the squash kingdom. Along with Sweet Dumplings, we have sometimes eaten it roasted with apple, sultanas and cinnamon as a dessert as well as a roasted vegetable. It's a very flexible vegetable to grow.
0 x
Top

Thanks for your comments - I picked the Apples today and the rest were lying about ripening so I couldn't resist putting them all together. Replying I've only just noticed the nosey dog.
Only one Crown Prince (the blue/grey one for those who don't know) my wife likes them but I think they are too sweet. The pale ones are Autumn Crown, the Crown Prince Butternut cross but are fairly tasteless. The stripey ones are Fairy which go mad in the tunnel, we have a load besides these, not a bad flavour but I'm not really a Squash fan. The Pumpkins are the Small Sugar KG freebie but we haven't tried one yet. The crinkly green are Kabocha, I can't remember the flavour haven't had any for a year or two.
We are already looking like Apples! Munching my way through Discovery and Laxton's Epicure for breakfast and lunch then "how do you want your Apples?" is the almost daily pudding call - got away with Autumn Bliss Raspberries today though. The left hand big box are Bramleys, loads more to pick yet, the other big boxes are Lane's Prince Albert (the one I photographed the blossom of) and there is a third box like them. We have been debating the smaller boxes this evening. We planted the tree in 1985 and it has always been pretty sickly but reprieves itself with a crop every now and then. It was bought as Gala but we are pretty sure it isn't, I think it might be Cox's Orange Pippin which would explain its good flavour and poor performance, not a Northern Apple.
It is a silly year for top fruit, my wife isn't helping with the Apple mountain yet as she is working her way through William Pears with some Concorde still to pick. There are two big boxes of Blenheim Orange in storage for the Winter and an unnamed Russet, Ashmeads Kernel and Granny Smith still to pick, oh forgot a box of Laxton's Superb. If you are passing there might be a sales table at the end of the drive!
0 x
My Weather
Top 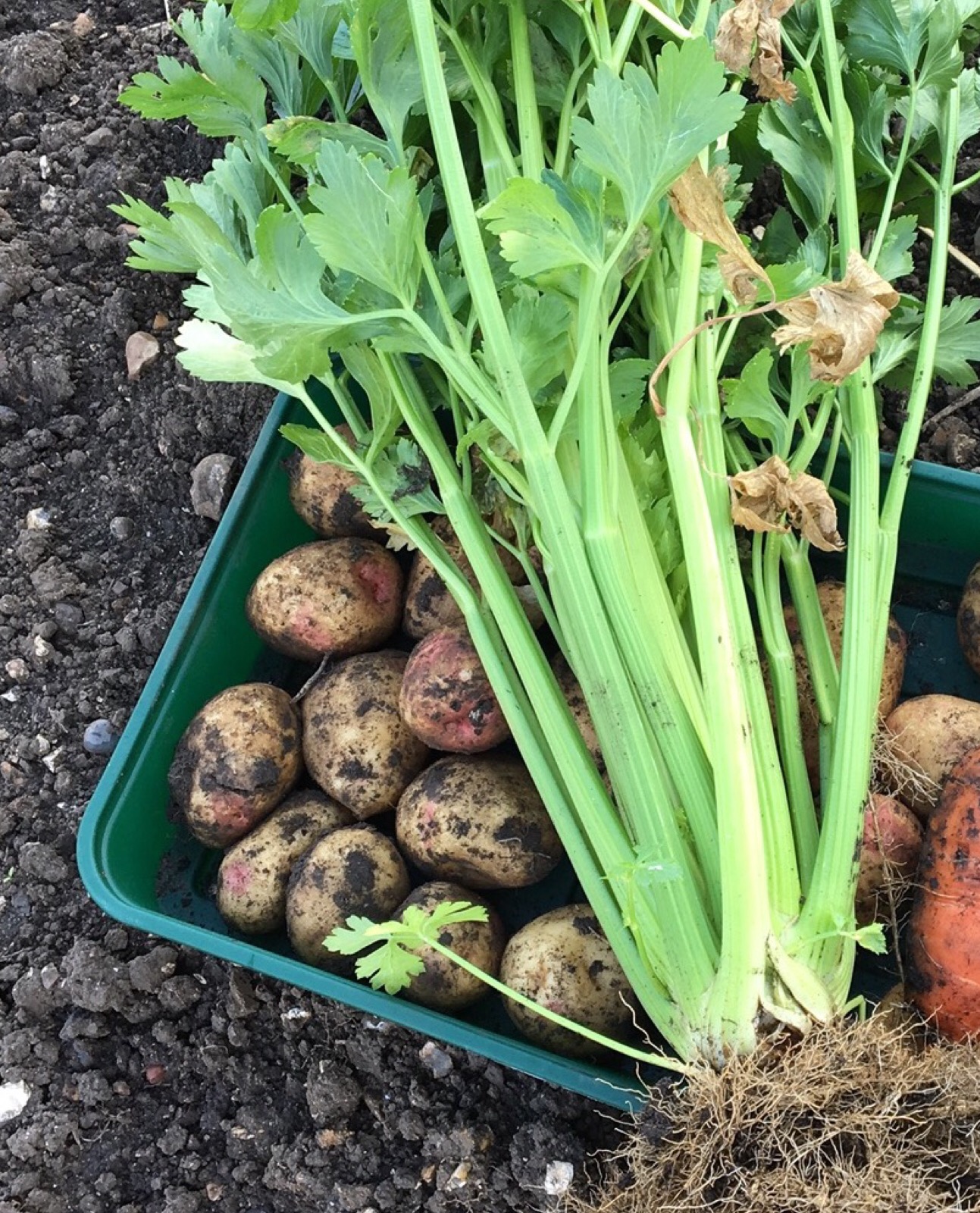 Wow! Your celery is amazing - mine never gets as long (I call it mini), and is always quite pale & stringy!

Another envy to add to the rest methinks!

Carrots of the day 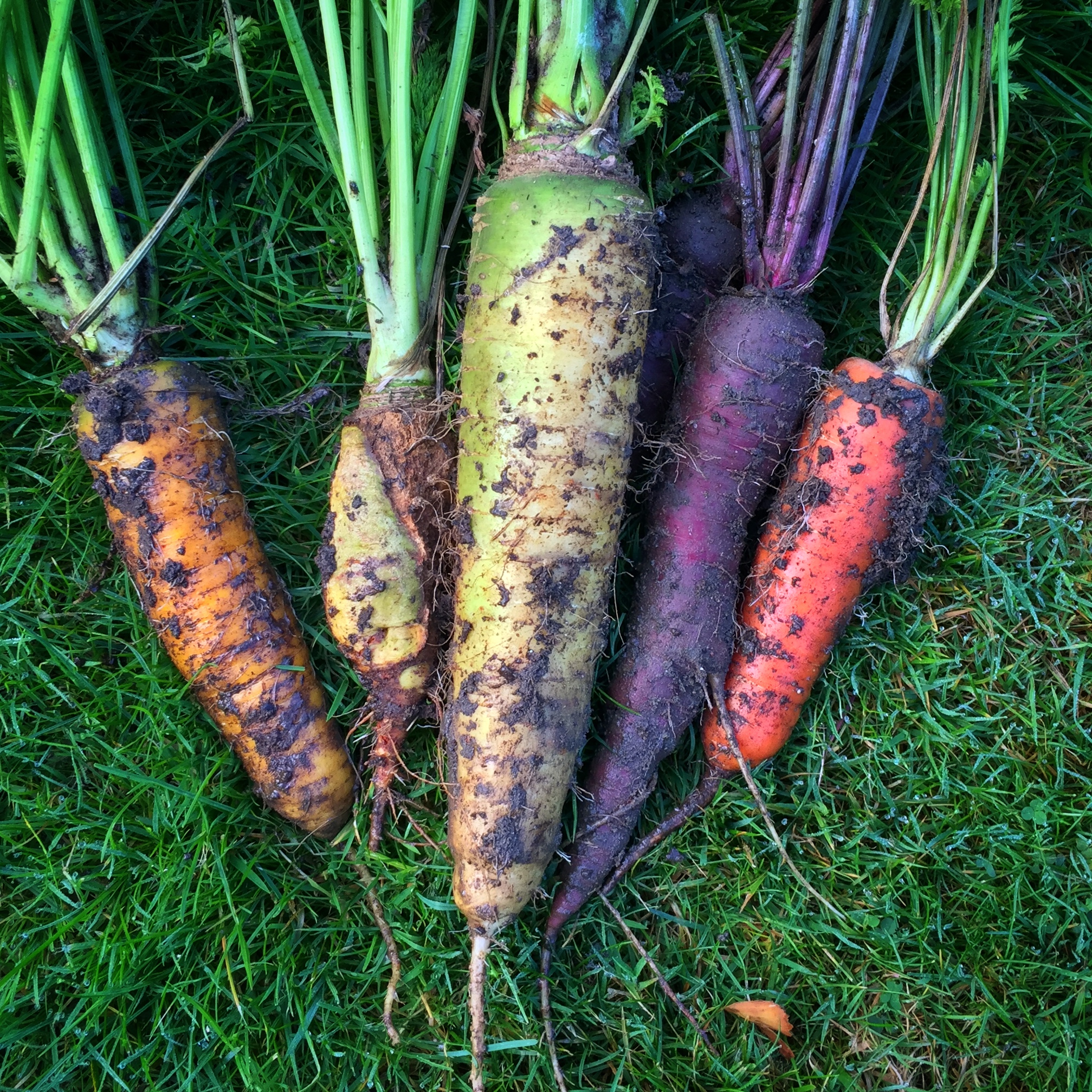 Nice looking rainbow Oscar. I hope they will receive a ceremonial serving with roast Sunday lunch. You would definitely know they were home grown by the definitive taste!
0 x
Top Geoff, Apple , pear and sultana compote with cinnamon for you for the foreseeable future I suspect! . Nice with breakfast porridge. I haven' t had an autumn harvested pear this year yet.
Where on earth do you store all your produce?. You must have a large garage or some outhouses?
0 x
Top

Advantage of originally being a large barn. Have a garage built into the house with racking down one side of it that has all the squashes and pumpkins on it with jams, pickles and chutneys as well. Also have an attached garage that was originally a shippon and in the back of that I've built a mouse proof (well usually) cupboard that holds apples, pears and potatoes. Two garages and can't get a car in either! How many trees do you have? Your pears look lovely, mine were fine but the skin was a bit thick for some reason this year, but I do have canker on the tree, so maybe it's own defences against this. They were intact & great when peeled, but all gone now!

Little harvested today, but did get another 2 courgettes and a yellow patty pan, some chard, another mini cabbage & a huge turnip and a few berries. Fridge, freezer and outside shelf spaces all pretty full, so got to eat & give a bit more away to make room.

Oscar - they're ace! Let us know how different they taste. I always think the yellow ones are much sweeter.

Geoff - very jealous of your storage and amazing harvest of fruit. Any cider making proposed ??

You got me counting Westi, might have worked out why I have a surplus! Four pears, one fresh in; 13 apples, again one fresh in but I did scrap one; two damsons; 8 plums. Trouble is we see what looks like a healthy tree being sold off for a £1 and we take pity on it, for some reason this means we don't always get what the label says. We shouldn't really be able to grow some of the stuff we do, particularly the pears, this far North at 600' with high rainfall. This season is exceptional probably won't happen again for a while. Haven't planned anything clever, probably give lots away.
0 x
My Weather
Top

Georff. I thought I'd had one gin too many yesterday when I looked at your storage photo. I swear it was displaying on my iPad upside down and that you've were first person on earth to defy gravity ! Whichever way you look at it that is still an impressive lot of fruit to eat for breakfast!

(Actually Photo IS still displaying upside down on my iPAD bur not on my laptop. How odd!,)
0 x
Top

Wow Geoff - a proper orchard! Lucky you! No wonder you had to sort the storage!

I do the same with sickly plants, I think I may be growing a host graft on lottie, everyone ask what it is but I haven't a clue and it is 2 years now and no fruit so I think it will end on the neighbours bonfire! Lesson not learned though, will always go for the bargain, especially if a real bargain & a bit of green under the bark! Wot's a £ if you get lucky?