by mr-cecil
After several years of ruined late pea crops (due to mildew), I decided to only bother with early peas last year.

I'm wondering, can anybody vouch for some later varieties that they know to be resistant to mildew later in the season and are worth growing?

If anyone has any other tips, I'd be interested to know....I know milk is supposed to help.

have you tried sowing/planting less close together.
Lack of airflow big cause of mildew

by Geoff
Do you sow several times? I grow a few earlies but mainly rely on one fairly early sowing of Greenshaft to fill the freezer. Most years they crop well with only a little mildew as they are finishing. I sow 10 sets of rootrainers 2 peas per cell in week 15 and plant them out week 17 or 18. I grow 3 rows 1' wide and 20' long (varies a bit depending on germination) in a 10' bed so about 3'6" between the rows. I haven't worked out the plant density but it is probably similar to yours. I support them with string and pea sticks.

by Tony Hague
Pea Terrain, from Kings or T&M. I grew three or for rows of it last year, with no mildew and great yields. I almost always have mildew with every other pea I've tried. A superb variety. Can't recommend it enough.

by sally wright
Dear Mr-cecil,
Moles seeds has a maincrop one called Charlie which sounds promising. There has been interesting developments in pea breeding of late and I have found an article which might be helpful pgro-vining-guide-2016.pdf
The thing is there are two kinds of mildew that your peas can get and unless you know which kind it can be hard to recommend a suitable variety.
Regards Sally Wright

by Monika
Mr-cecil, DT Brown stock a pea called Flavora (I have not seen it anywhere else) which is said to have resistance against fusarium wilt and powdery mildew, so I have ordered some for this year as well as Hurst Greenshaft which I grow every year and find fairly resistant in any case.
Do you always keep your peas well watered? Dry root conditions certainly encourage powdery mildew.

I sow them in metre long lengths of guttering in the greenhouse, which are moved out when a suitable size and weather permits. Growing in gutters with duck tape ends has resulted in better germination and means it is easy to remove the tape ends and slide the peas out to their final growing station outdoors

They are sown in two rows, two inches apart so that they form a VVVVVVVVVVVVVV pattern. When planted out they are grown up especially made wooden frames with stock wire.

Last year we suffered mildew badly, to an extent not suffered before, thinking back this may well have been due to my lack of enthusiasm leading to a poor watering regime. The ground did dry out at times and whilst the crop volume wasn't bad it wasn't as good as it has usually been. 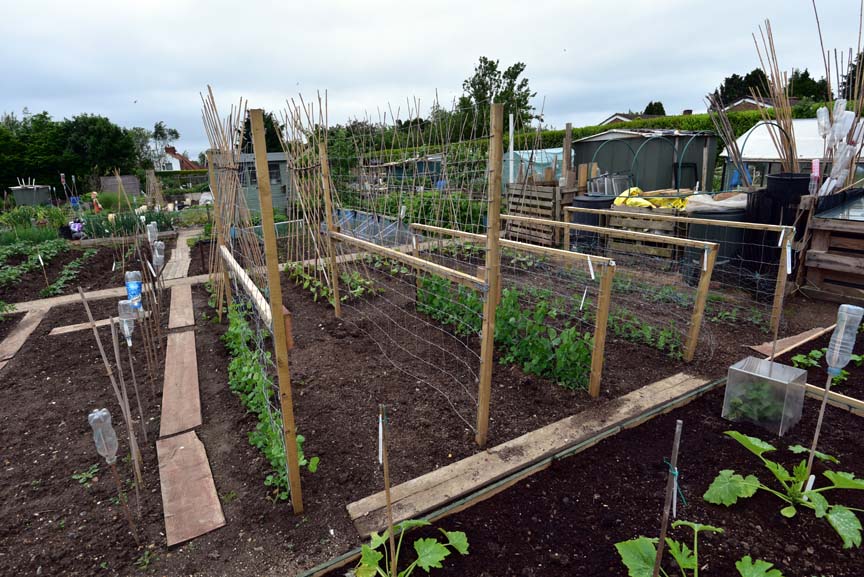 by mr-cecil
Monika, watering outdoors might be a factor as I sometimes forget as I'm concentrating on watering the polytunnel. I know some people talk about using grass clippings as a mulch, but I've never tried that (I don't have access to clippings I can vouch for). I guess I could try planting through plastic or using bark.

Geoff , I sow successionaly in module trays and plan out (about 120 plants). Last year I planted some out in the polytunnel and outdoors (rather than just outdoors). I had a steady flow of peas (indoors) from the end of may - end of june. I had outdoor peas from 2 week July - early Aug. Do you think rootrainers make a difference?
All times are UTC+01:00
Page 1 of 1
Powered by phpBB® Forum Software © phpBB Limited
https://www.phpbb.com/