Can't identify that mould? Got a great tip for keeping slugs at bay? Suggestions for organic weed control? Post them here...

Had a real problem with slugs this year on our plot despite how dry the weather was at times.

Drastic measures being called for in 2015.
Has anybody any experience of using a proprietary brand Nematode product, if so did it work for you. Any pitfalls experienced.

Thanks
0 x
The danger when people start to believe their own publicity is that they often fall off their own ego.
At least travelling under the guise of the Pa Snip Enterprise gives me an excuse for appearing to be on another planet
Top

I used them this year complete waste of money, i complained to the people i bought it of i gave it to one of my plotter mates he used it then said the same
0 x
Top

I had less problems with slugs this year though I didn't know about micro-slugs that get in amongst brassica leaves and they did hit me hard early-on.

I had a tip from an lady who said she always raked the old type and now the new type slug pellets in rather than leave them on the top. I did this though being cynic I am I also scattered some on the surface.

So far this has been a good result.

Where do micro-slugs slugs come from ? Are they the babies of slugs that retain a micro-stature just so they can navigate in between cabbage leaves ?
0 x
How are you supposed to start and maintain a healthy lifestyle if it completely removes a wine lover’s reason to live?
Richard.
Top

Thanks for the replies Robo and Ricard (not forgetting the H)

Sounds disappointing Robo,
I wonder why the lack of success. Not as if the product I am thinking of hasn't been around a few years so some must have had some success with it otherwise it would be long gone off the market I would have thought.

Ricard (with the H)
I had slugs of all sizes in amongst the brassicas, I am guessing there might have been more small ones because the birds didn't spot them.
Was not unusual to pick a dozen or more slugs from within each of the cauliflower heads
Last edited by Pa Snip on Tue Dec 16, 2014 12:32 am, edited 1 time in total.
0 x
The danger when people start to believe their own publicity is that they often fall off their own ego.
At least travelling under the guise of the Pa Snip Enterprise gives me an excuse for appearing to be on another planet
Top

I use nemaslug on the potato beds and find it works well. There is very little slug damage despite the rest of the garden being snided out with the things.

I do find the best solution is to have about three slug hunts a week for a few weeks and the numbers will have reduced dramatically over about three weeks. I go out about an hour after dark - not in winter - when the slugs are active. If I am feeling cruel I put them in a bucket of water with a good dose of washing up liquid in it - they die quickly in this. If I'm feeling kind I take the bucket full to the end of the road and tip it down the wooded banking hoping that the song thrushes and hedgehogs will deal with a few of before they manage to find their way back.

One night this summer I stopped counting when I got to 1,700. The numbers reduced by a few hundred each time, so it does work. I was just amazed that I had any plants left with the huge size of both the slugs and golf ball sized snails. I use slug pellets round the seed beds outside or more usually germinate things in the greenhouse and plant them out when they are a bit bigger to give them a chance.

When I find them in the cabbages I give them a spray with salt water. This gets rid of caterpillars too and the cabbages don't seem to mind the occasional application.
0 x
Top

PLUMPUDDING wrote:I
When I find them in the cabbages I give them a spray with salt water. This gets rid of caterpillars too and the cabbages don't seem to mind the occasional application.

Thanks for the tip, two sprays I need to make up for next year. Garlic and salt, I'm not entirely sure what is scared of garlic spray.

Also, I didn't know blackbirds and thrush eat slugs and snails.
0 x
How are you supposed to start and maintain a healthy lifestyle if it completely removes a wine lover’s reason to live?
Richard.
Top

Your post caused a sharp intake of breath and an admiration for your tenacity. 1700 in one night !! wow. No wonder it seems like an uphill battle to me.

Good to hear you are thinking of the Thrushes and Hedgehogs though, they both need all the help they can get.

Despite my best efforts to protect my overwintering young Spring Hero cabbages with netting, crushed eggshells and slug pellets they are already suffering copious amounts of leaf damage.
0 x
The danger when people start to believe their own publicity is that they often fall off their own ego.
At least travelling under the guise of the Pa Snip Enterprise gives me an excuse for appearing to be on another planet
Top

In spite of the dry summer we had up here, our potatoes were badly slug ridden. I had used Nemaslug but that made no difference at all which I blamed on the lack of watering (it does say you have to ensure that the ground remains damp after applying the Nematodes). The nearest tap is up a steep slope and we really could not use the watering can on all the potato rows.

When clearing up the hardy spray chrysanthemums recently I still found lots of tiny black slugs, so it was back to slug killer I am afraid.
0 x
Top

I was thinking of giving all my raised beds a going over with hydrated lime, has anybody tried it on slugs
0 x
Top

Hydrated Lime has the highest Neutralising Value of commonly available lime types, much less is required to alter Ph values of the soil and it may well prove to be an irritant to the handler so care is needed on both counts.

I can't say for sure but I would have thought the level of application needed to have any effect on slugs, if any, would possibly have a excessive effect on the Ph value of the soil
0 x
The danger when people start to believe their own publicity is that they often fall off their own ego.
At least travelling under the guise of the Pa Snip Enterprise gives me an excuse for appearing to be on another planet
Top

Conversations from our plots seem to tell a tale of wooden edges to beds = many slugs. Always somewhere for them to hide. The guy with least slug damage has very closely trimmed grass path edges and has a 'V' shaped little trench between soil and path.

Interesting observation there MW, thanks.

I tend to have associated wood more with woodlice than slugs I have to admit.

When we took over this plot in 2012 it was the archetypal overgrown jungle that so many plots are allowed to become before being re-let. That year I dug it over by hand, removing as much rubbish, weed and out of control raspberry canes as possible, and come winter I covered it with black plastic sheeting.

They did not actually say so but I have reason to believe the slugs were extremely grateful for this winter habitat I had created as come the start of the 2013 season there were slugs everywhere under the plastic as I uncovered each section. There was also a number of rat and mole runs.

When we took over another section of an adjoining plot in 2013, again it had become unkempt and overgrown and we found about 30sq yards of it had black plastic sheeting buried under it about 4 inches down. Don't ask me why, no rhyme nor reason other than bad housekeeping by previous plot holder I would suggest.
Another haven for slugs.

A lot of our current slug issues may well resolve themselves by the now constant working of the ground, hopefully aided by our decision to not use winter plastic cover over the ground. Along with our decision to give the Nematode product a try in 2015

In the meantime we are letting the birds frogs and toads get to the slimy creatures and the weather do some breaking up of the soil. 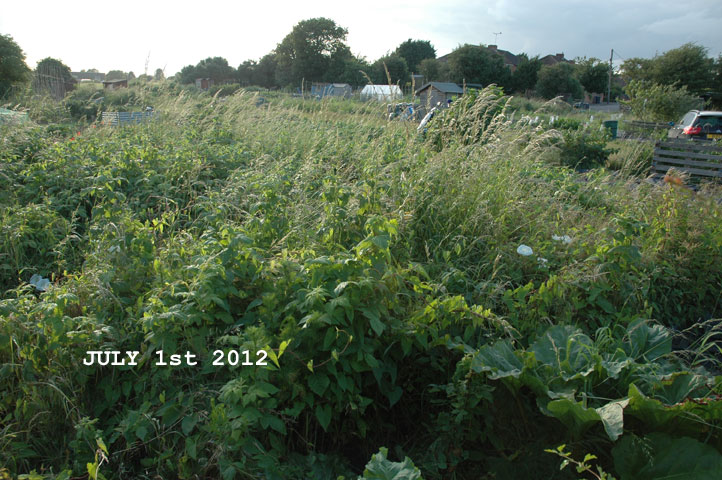 0 x
The danger when people start to believe their own publicity is that they often fall off their own ego.
At least travelling under the guise of the Pa Snip Enterprise gives me an excuse for appearing to be on another planet
Top

Sounds like a plan Pa Snip. My slug problems got a lot less when the plot next door to mine was finally cultivated. Before that if I went up early in the morning the slugs (big orange devils) could be seen trundling back across the path to next door having feasted on mine all night...

Anybody tried slug pellets with Ferric Phosphate? It is OK for Organic gardens registered growers. The Ferric Phosphate stops the slugs eating, they go an hide and presumably starve to death. But ir is not poisonous to anything but slugs and snails.

I tried it last year and had no problem with slugs and snail.

I also find the compost bin a good source of slugs and snails. I now keep my compost in an old rain barrel with a good layer of scrunched up chicken wire at the bottom to give a liquid sump, introduce a few worms once the level of vegetation is about one quarter of the barrel and just keep throwing the vegetable matter into it and drawing off the lovely nutrient rich liquid and diluting this with water to fertilise your plants. I have been using this for five years now and have not had to empty it, as it never gets 'high fiber' material. However I now have about half really rich material that could go onto the garden, I just need to set up another one so that the top layer can get eaten away.
0 x
I don't suffer from insanity .... I enjoy it!

Return to “Weeds, Pests and Diseases”