Can't identify that mould? Got a great tip for keeping slugs at bay? Suggestions for organic weed control? Post them here...

I'm calling it moss, but it is more like algae on the bald bits of lawn, in that it comes off in strands.

I've bought standard lawn moss killer before but it doesn't work, the last lot didn't even turn orange. Anyone know of a good product that will get rid of it so I can re-seed as it is pretty precarious even getting to the greenhouse as incredibly slippery with all the damp weather.

I have a mossy lawn and moss on lawns that shouldn't support moss so I did a fair bit of research over ten years along with trying all the proprietary means of dealing with moss. I got to kill it, but it was resurrected.

Further reading recently suggests if we create a prefect base for moss we will always get moss.

I get moss on grass that holds water, the soil is clay-ish so I understand. On another lawn that doesn't hold water I have moss where I cut the grass too short in my effort to produce a bowling green.

When I faced up to the answer for my mossy lawn it was to cost a JCB for about a week, £500 for skips and dumping charges, an inestimable amount for graded grit and decent top soil then the seed and manual work that I'm not up too these days. If I did all that I could still get moss if I cut my grass too short at the wrong time.

Lawns.......just another black-art Westi.
0 x
How are you supposed to start and maintain a healthy lifestyle if it completely removes a wine lover’s reason to live?
Richard.
Top

I use a lawn feed with moss killer and that usually kills it for a while, but we've had such wet summers that all kinds of moss and algae are thriving. I've stopped worrying about and if it looks green I leave it.

I feel sorry for my neighbour (slightly). She spent over £40 a square metre on pretend grass and when I visited last week that was full of moss and the bit near her bird table was covered in germinating bird seed.

I've been looking at pictures of lawn moss and I'm not sure it really is moss. You can't rake it out, even when dry. There is more on the bits without grass, right on the bare earth than among the grass, the bits where the female dog has tiddled & killed the lawn. I wondered whether it was something in her wee, but she only has flea drops & isn't on any meds so don't think so. I will try to get a picture tomorrow if it is sunny

I really think it is more algae like. Someone suggested I did a test patch with some sort of pond clear but not sure if it would be safe for the flower beds if it accidentally went in. (I don't have a pond so no idea about these types of products). More research needed methinks! I'm not after a pristine lawn (not a chance with the critters anyway), but would like this stuff out so could re-seed & walk safely in damp weather.

I used to work for a company that was, at the time, the biggest manufacturer & distributor of pond remedies in the UK.

Most pond remedies would be harmless to both plants and wildlife UNLESS it specifically stated otherwise.
In which case that product would be self defeating since there are both plants and fish (and potentially other amphibians) in ponds.
If it killed plants it would have to have been registered as a herbicide.

Something that a was intended for solving greenwater algae would NOT work on a lawn.
Neither would a pond clear product designed for clarifying water work on algae on a lawn

Your brown patches may well be caused by female dog urine, it is said to be more likely to cause this than male dog urine.
Seems a bitches urine is stronger
0 x
The danger when people start to believe their own publicity is that they often fall off their own ego.
At least travelling under the guise of the Pa Snip Enterprise gives me an excuse for appearing to be on another planet
Top

Are you talking about Liverwort or something similar? 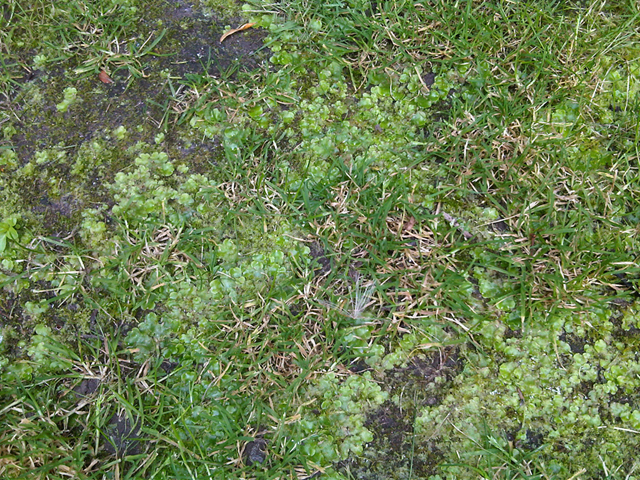 If so RHS might help https://www.rhs.org.uk/advice/profile?pid=414
0 x
My Weather
Top

There is no form of leaves or anything on the green stuff, it truly is just like slime. Lawn is in sunny position, previously dry & draining well but this stuff stops the drainage so have puddles with this stuff lining them, that I have to fork through it to allow them to drain, I've tried taking off the green stuff with some soil, scrapping it off, flipping it so green under soil but it just comes back.

Funnily it doesn't invade the flower beds though? Weird! Didn't get a pic as late off work, but will get one on the weekend then you may be able to help.

This is stuff I'm dealing with! Any idea what it is & how I can get rid of it?

I'm guessing it is one of the cyanobacteria mentioned in the RHS link but I can't find a photo to back it up. If you search there are some links to green keepers with the same issue.
0 x
My Weather
Top

More research required then! It's proving to be quite indestructible by natural means so will have got resort to the big guns - if pet friendly.

I forgot to ask in my reply above about the efficacy of pond products.

Have you carried out any Ph. tests on the soil where it is directly affected.

I'm guessing the soil may well be sour, and still have not ruled out bitch urine as a possible cause
0 x
The danger when people start to believe their own publicity is that they often fall off their own ego.
At least travelling under the guise of the Pa Snip Enterprise gives me an excuse for appearing to be on another planet
Top

Interesting stuff this Cyanobacteria! Responsible for the 'blooms' in waterways & thought to be caused from fertilisers being washed in. Thinking about what I've done to get rid of it - the moss killers also contain fertiliser (well the ones I bought), so I have compounded the problem. Damn nasty those blooms as well as harmful to humans & animals, but haven't found anything like that when it is in lawns. (Whew)! Also tried raking it which makes it spread.

I'm going to tackle it on 2 fronts with improving the drainage, which was good actually, but this stuff undoes what you do. I certainly can't afford the recommended fungicide that comes without guilt in killing micro-organisms. (Nearly £70 for a 750ml spray bottle - £30+ of that delivery from the States)! So I have ordered copper sulphate, the original control for it, & will have to redress the balance with nature later! Female dog wee not helpful either so looking to get some 'rocks' which sit in the water bowl & are supposed to neutralise the hormones.

I definitely would not order anything of that nature from the states without first checking with DEFRA (ex MAFF) or whatever they are called this week if it is something that is approved. It may well need a licence. Otherwise you could lose your money and the product as soon as it hits customs.
0 x
The danger when people start to believe their own publicity is that they often fall off their own ego.
At least travelling under the guise of the Pa Snip Enterprise gives me an excuse for appearing to be on another planet
Top

Not ordered it Pa! Couldn't afford it for a start! x

Is the urine from a female dog different to that of a dog or is it that a female evacuates her bladder in one tiny spot rather than spraying all over the place like a dog ?

If you empty a test of your best early morning stuff onto a spot on your lawn than area of grass won't cope with that amount of whatever kills the grass. Mostly nitrogen I suppose ?

Dog rocks ? What will they do ? Stop your lovely poodle from evacuating whatever the it's body doesn't want ?

I'm told that dog piss is exactly the same as a bitch piss, just not in the same spot. Ok, can't believe everything I'm told or read so I did a test.

Guess what ?
0 x
How are you supposed to start and maintain a healthy lifestyle if it completely removes a wine lover’s reason to live?
Richard.
Top
Post Reply Previous topicNext topic
41 posts

Return to “Weeds, Pests and Diseases”