You can say that again OH.

Thank you, OH! Yes, the days are getting shorter but we really can't complain about the weather lately - rain at night, sunshine during the day.
Just off to pick the broad beans for lunch today.......
1 x
Top

Seems to me the older you get, the shorter the days become, whatever season of year it is. The glass just empties more quickly, and it doesn't help when things like Coronavirus appear from nowhere and steal 18 months of it !,
3 x
Top

It’s been a terrible time ,I could only have ten people at my wife’s funeral ,we could not go anywhere for the usual drink after, we have a small place in Spain I’ve not been for around four years we have it up for sale I need to go to do some repair work on it I’m hoping I can get there in September,July and august are far to hot 50 deg. Is not unusual at 8 o’clock at night it is cooler by the coast but it costs a lot more, I’ve tried on my plot but I’ve lost a lot of interest even now I keep getting complemented on it I go down every day to sort the chickens out and water the tomatoes and a few other things my mate two plots up past away just before Christmas the guy on the left of mine is currently doing 18 months for assault with two other offences pending the guy on the other side is looking after his mother who has dementia I think that’s his excuse he’s the laziest person I’ve met I might sound mean but he’s unreal , my potatoes are a disaster we’ll the earlies I’ve dug up I’m hoping the late ones fare better, I keep thinking why I never have a good crop of spuds I’m now thinking it may be the the area I’m planting them in as I’ve fruit bushes all round it ,I’m now thinking the bushes absorb all the water from the soil before the spuds have chance I will have to check on the middle runs and see if they give me more than the outer ones maybe use a couple of the raised beds for the earlies next year ,life seems to be nothing but decisions
0 x
Top

Big day for our town today our team is in the challenge cup final at Wembley there wont be as many there as usual due to COVID but still hoping for 40,000 ,our town normally in a time like this would be a sea of red and white this time I’ve not seen one house showing our colours sign of the times maybe ?
0 x
Top

Pleased with the score, Robo....

Wow it's hot out there today, makes your hair rustle like pea straw...

It is. We went up early(ish) to water & pick. A second trip will take place this evening.
Meanwhile, the sperical courgettes we planted are growing. I had thought they might not grow so large! 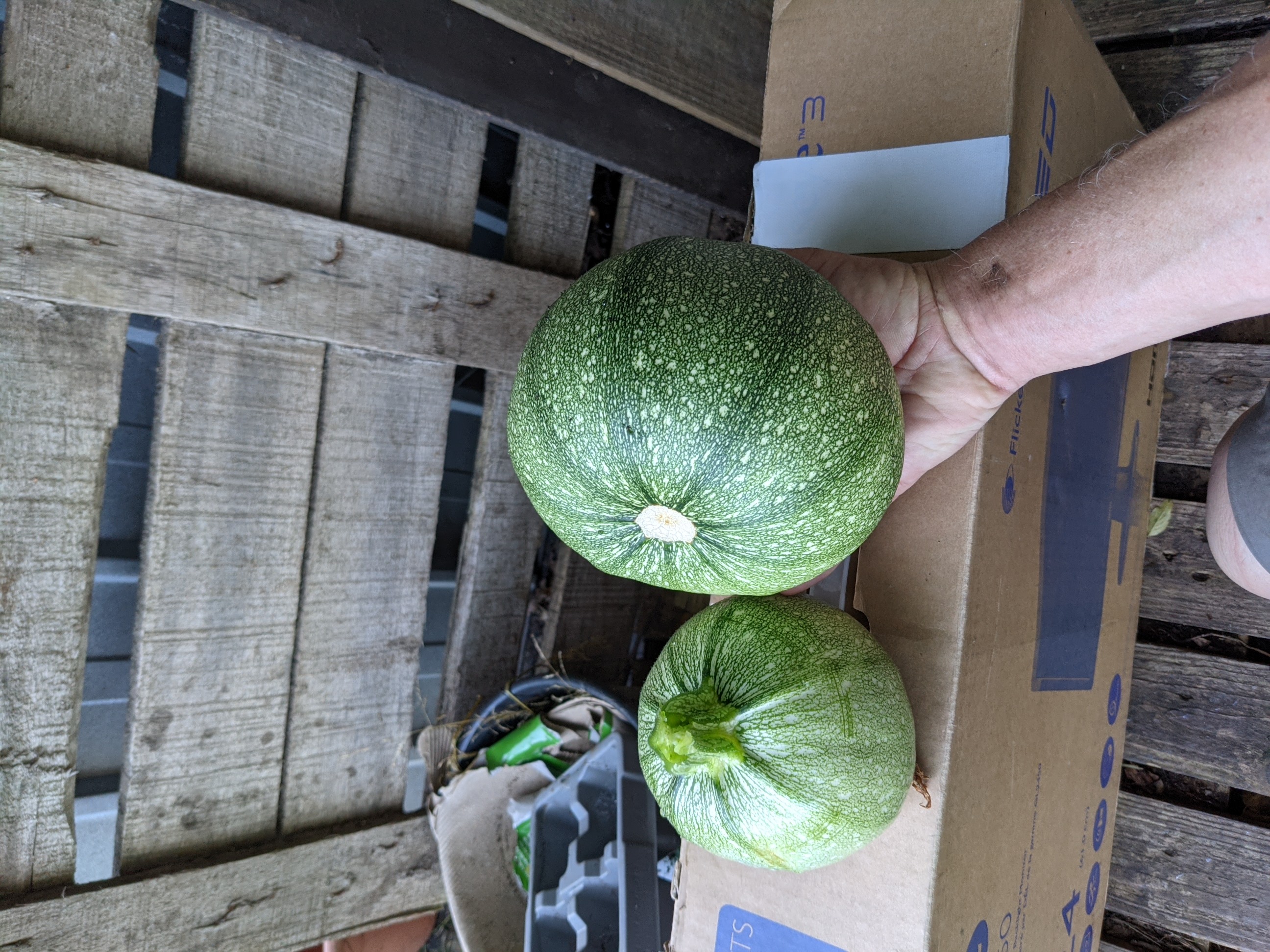 0 x
Nothing is foolproof to a sufficiently talented fool.
Top

I remember growing courgette 'eight ball' at work. My boss asked me what they were and looked a little shocked when I told him...I think he thought I said ape not eight..........

Certainly was well hot, but thankfully not as humid as it has been. Nothing like having a scratch with the factor 30 applied & finding you have so much dirt attached to it, so it feels like fine sandpaper with the odd wee insect for good luck.
0 x
Westi
Top

I started early and completed a tidy up of a rose bed, then some quick seedling weed hoeing in dahlia bed...but then went for dappled shade of trees on lawn, trimming around and weeding out the 'circles' around the trees. Then it got too much so retreated to the potting shed to pot on some eryngium from trays. 29.9C said our outdoor sensor mounted under the gutter on north side of the shed... Clouded up around 3pm when a 50% chance of a spot of rain was forecast...but thence returned to blue sky.

Shelled a few more Radeo peas for the freezer this evening whilst listening to Radio Caroline North...live from the MV Ross Revenge

I had craft fairs both days this weekend. Saturday was just about bearable, as there was a breeze, but packing down in 30 deg wasn't fun. Yesterday was very challenging. Set up at 8am was already 25 in hot sun. It just got hotter and hotter, under the gazebos there was no breeze and just heat accumulating. Pack down was hellish, I pinned a spare piece of fabric around my shoulders to keep the sun off (i did have short sleeves covering my shoulders, but I was still worried about burning going back and forth to the car) With the addition of my hat, I was told I looked like an extra from Clint Eastwood spaghetti western! Car told me it was 35 driving home. Lucky for me, I have aircon.
1 x
Top

Another scorcher. I have already picked a large feeder bucket full of broad beans, podded and frozen them. And the shallots Jermor are now lying out in the sun to 'cure'. They are particularly good this year - very evenly sized and no bolters. I broke their roots about a week ago. More hot weather to come for the week, they say.
1 x
Top
Post Reply Previous topicNext topic
56 posts