No snow here but mighty white frost. It's showing 0.3C on outdoor weather station now....so we're nicely above the suggested -2C as shown on Met for this location on last hour.

Poor old glasshouse built by my dad in 1969, as I have often recounted. If cleaned and re-putted now (maybe not this morning.!) and given much preserver is at that moment in time that soon will be past saving if not sorted quick... Heart says get it done, reality says we've had the best out of it and any well meaning dismantle will find more grief in the structure. Glass/putty and pins are a huge part of integrity of a glasshouse.
I do admit to having a look at a web page of new glasshouses recently and even went down garden with tape measure...though the other reality is time as I only grew tomatoes this year due to being at home given the current world situation. Mighty pleased I did grow them...and we enjoyed many a tomato sandwich for Sunday tea..just like we always did.

Greenhouses do age, don't they, Clive? Ours (an Alton glass-to-ground greenhouse) is now almost 50 years old and has been moved in between. A couple of years ago we contemplated replacing it with a new one (I did mention it in this forum), but today's prices of an identical one are eye watering and at our age we certainly would not get the full benefits. So we make do with the old one, replacing bits of glass, fittings etc.......
0 x
Top

I think a greenhouse/glasshouse can be such a special place and if only used for growing a small amount of stuff, they can still give a huge amount of pleasure....just like Clive said, "a tomato sandwich for Sunday tea", that alone can make it all worth while!!!

Got a good couple of inches of snow now and still coming down heavily...
0 x
Kind Regards, Old Herbaceous.

Cottage pie a la Co-op today with Early Onward peas from the freezer.

I have regularly typed of my use of Co-op veg ready to ping in microwave recently, it is just so easy..too easy....as on two recent visits that shelf has been empty again... Buying their veg for heating/cooking has been a most helpful part of recent years..but I don't go with much traveled salad things...

As well as the tomato, from the glasshouse, sandwiches by late summer we were on beetroot ones too...I think it became the most fully used row of beetroot I had ever grown.

So much for doing a bit of allotment work today. We went down to get some muck from our regular Sunday drop off, but thick snow caused a real problem. I was pushing a barrow with a solid wheel and it just kept picking up packed snow until it stopped turning as the wheel was too big. I had to kick all the snow off to get going again, not easy with a barrow full of muck! Fair wore me out, but worth it.

I know this corner of the earth, it smiles for me...
Top

No more snow today, picked up to just over zero from -5.3°C overnight, but the mountains look good. 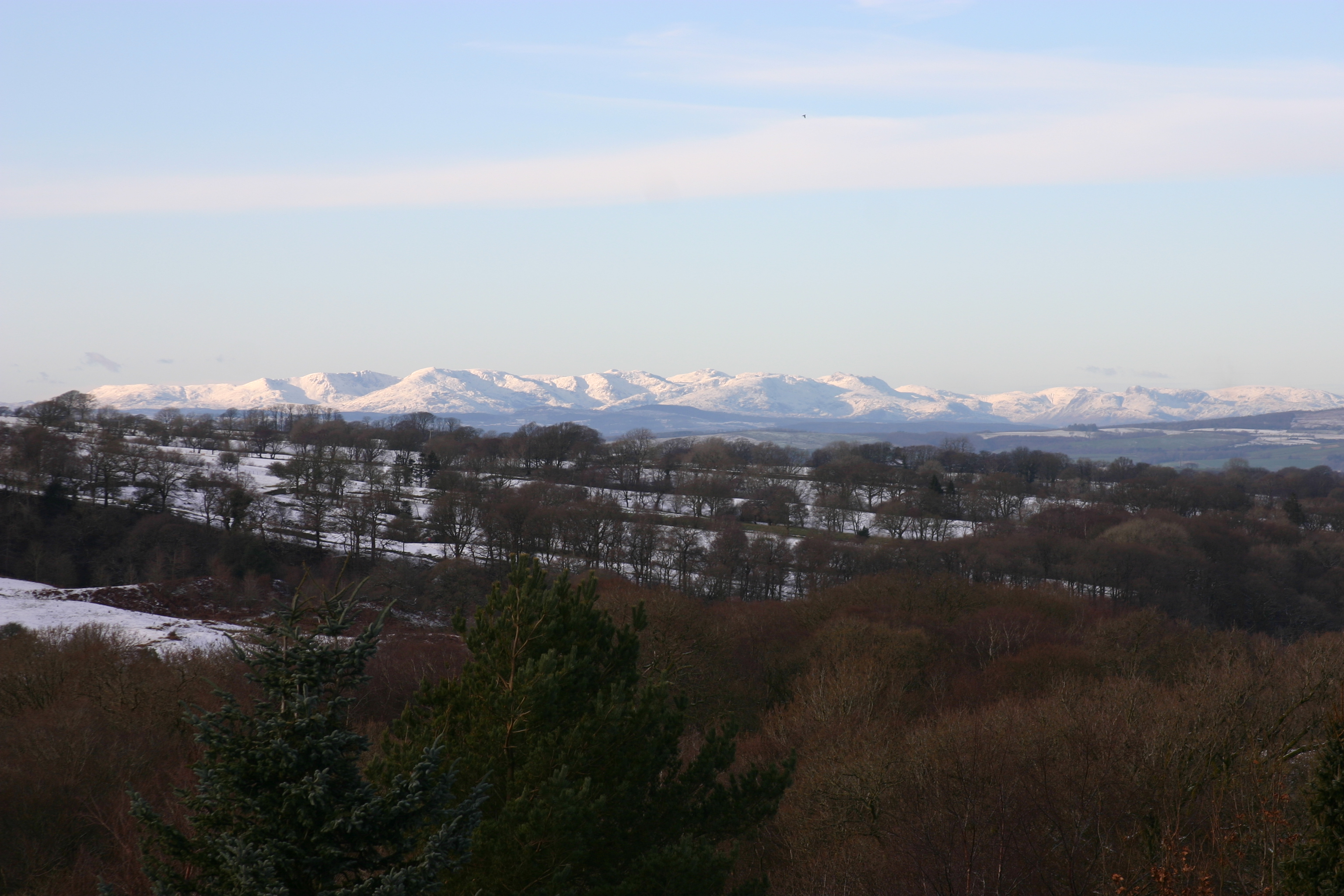 Quite a lot of snow here. Have read a lot of Covid vaccination centres had to close which will cause chaos with appointment rescheduling no doubt. Keeping a wary eye on the tiny peppers forming on my overwintering pepper plant on window ledge but hope they'll be ok.
0 x
Top

Snow today. By Herts standards quite enough, it wouldn't scare anyone from Yorkshire or further north.
But it is an unmade, unadopted road which makes things more difficult. 1 x
Nothing is foolproof to a sufficiently talented fool.
Top

Encountered a needless road blocking accident on way to collect daughter from rural car home she works at.
One of her colleagues had gone, probably too fast, wide round a ninety degree left hander, lost it braked and ended up nose into the the graveyard gates with a flat front left tyre. Which on inspection tin was off the rime but still on the wheel, so no traction for her.
Someone rlse turned up coming the other way and I managed to guide him through with inches to spare and he volunteered to help, so i left him to it saying "I'll be back shortly. " he'd just dropped his son at same workplace.

Returning with daughter no one was present, assume chap had given young lady a lift to work behind me, as the car was still just round the blind bend broadsides on, I rang yhe rozzers with what-three-words to guide them and went home as daughter is on early shift today.
0 x
Do not put off thanking people when they have helped you, as they may not be there to thank later.

As long as she was okay...I suppose they wold want to do a breath test on her...
0 x
Kind Regards, Old Herbaceous.

Our electricity has just come on after cutting out at 5pm last night. Northern Power Grid were on the spot very quickly and discovered that the main cable along our road had smouldered for a while and melted the gas main next to it! Over night a big hole was dug in front of our house to repair the gas first, then the electricity, but by this morning still no 'juice'. So back they came, found another leak, another repair and NOW we are luxuriating next to the hot radiators! Luckily, the sun shone all day and provided some warmth on this otherwise very cold day .....
3 x
Top

Rain and no snow here. It was dark by lunchtime.

We're on "holiday" (using up the annual leave) - another staycation. Hope to use this time to get my ancient food blog up and running again.

I remembered we still had a couple of little Sainsbury's Christmas puds from last year in our store-room, so we excavated them. A little of what you fancy... They were quite a treat.

This time last year we hosted a big Burns Night party. This year it was a small glass of single malt and anticipation of an early night. At least the flat is warm.
3 x
Top

I bravely went down despite the really heavy frost & all the kerbside puddles iced over. It was indeed icy & crunchy down there so firstly i had to break up & sweep the ice off the path as knew if I didn't I would take a slip chasing the puppy to get back whatever she decided to nick.

Certainly couldn't work the soil so went around with the staple gun re-securing the chicken wire fencing, which was way down on the 'To Do' list so that felt good even though pressing the thing was a bicep workout. The sun peeped out now & again so tackled the shed. Only got the kitchen shelf bit done but I did paint the inside wall on that side & had fun making small dowels to fill the knot holes, but wood carving is not going to be a suggested career change. Just 2 more sides to do; well technically 3 but the door/window side is free of anything to lug out & sort. And yes I did do the girlie squeal & run as the spiders obviously had a good summer & were huge also not impressed with the face off from one who obviously had a caffeine addiction & wasn't willing to give up the coffee jar.

I was pretty chuffed with how cleaner & brighter it was & looking forward to the next walls which is fine to paint but upgrading the bags on nails with things in them & going for shelving & labelled boxes. Well at some point I do have to use the drill thingie Mr Westi thought would be a great gift - 3yrs ago!

(Wish me luck the curtain pole fell down I did as a test)!
2 x
Westi
Top

Tried to send an email to my Bank this morning. It would seem this service is no longer available, I can only speak to a computer. Ah well I think in this modern age, it is called progress.

Shallot Man. - And another major banking chain are closing more branches in the interest of "improved customer service"!! - more likely with an eye on the ultimate profit line and management bonuses!

Had my March edition of KG today with four packs of free seeds including cylindrical beetroot which interestingly I've never grown. - only the round ones so will give them a try. Interestingly never seem to see these types on sale in shops. Are their characteristics any different from the round ones? Can,t remembering having these since my childhood (and that was many years ago!). Was this variety more popular then? Can anybody remember ?
0 x
Top
Post Reply Previous topicNext topic
178 posts

Users browsing this forum: No registered users and 35 guests