I shall have to grow some kiwanos next year, Elmigo. They look amazing - kind of like dinosaurs turned into melons.
0 x
Top

I dragged out and committed my purple mange tout to the compost heap - they just weren't tasty enough to justify the space, I'm afraid. Green mange tout are so much nicer, as are French beans.
1 x
Top

How wonderful, so happy for you! They all look great.
0 x
Top

Did someone mention Early Autumn? Can't see the bottom of the garden this morning. 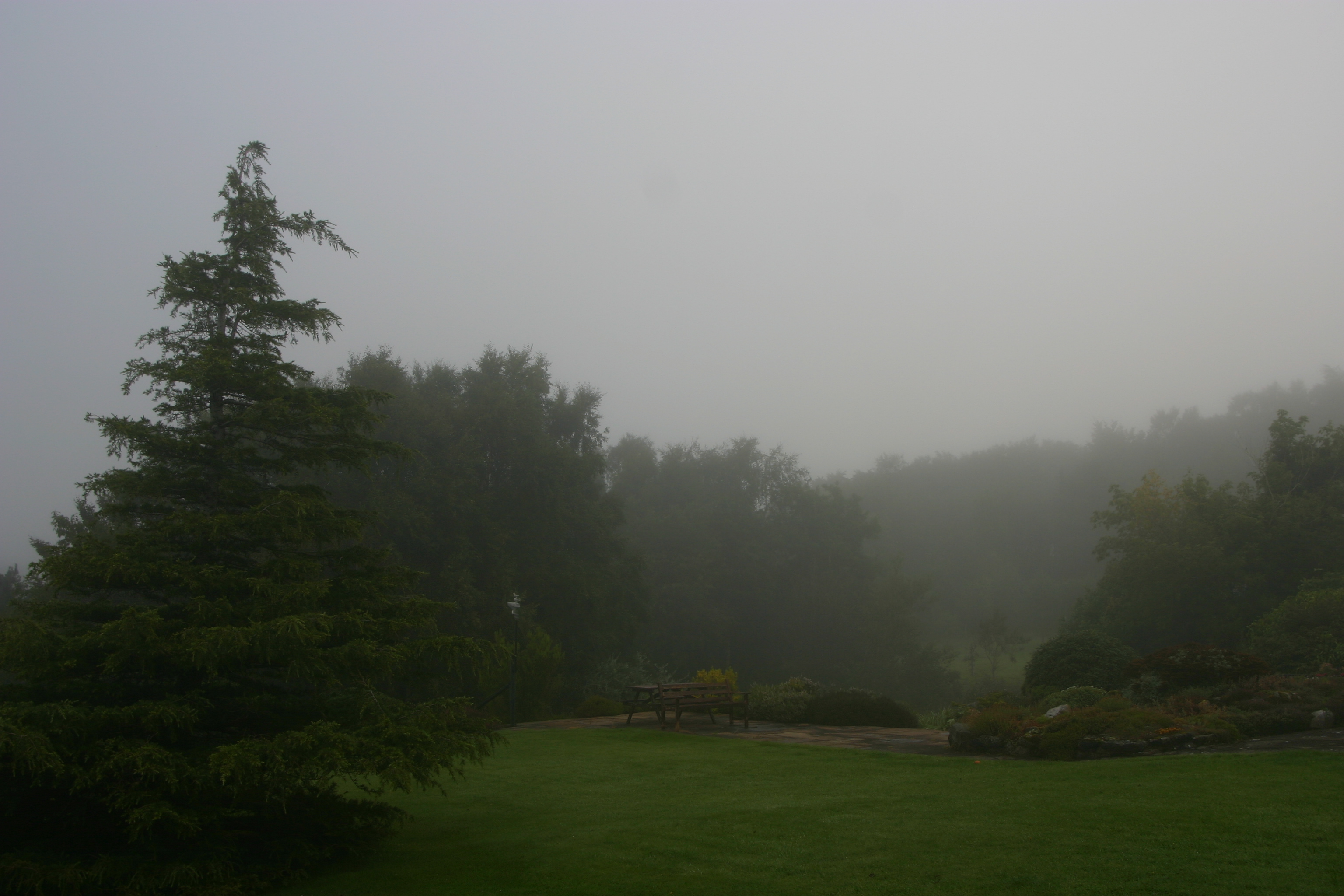 Definitely a great harvest! The plants seem to be very happy but they need a lot of water as the pallets dry out quickly. It looked similar here this morning, Geoff, although the drizzle has finally cleared and things are warming up.

I cleared out my tenderstem broccoli (brokali) this morning as the plants had valliantly given their all - delicious, heavy crops over a good 6 to 8 week period. I tried giving the plants a final feed and seeing if they had anything left but only a very few tiny side shoots were coming through. Interestingly, though, they did start to show signs of their oriental parentage. Rather than shooting from the stem, lots of shoots were coming up from the root below the soil and they were far more like an oriental kale, both in taste as well as texture. They didn't have a brilliant flavour, though, and as I've got some Chinese kale to sow I didn't think it was worth keeping the bed occupied just for the sake of interest. I've given the bed a feed of chicken manure pellets and put in some leeks that have been languishing in a seed tray whilst waiting for space to become available. They may not do too well as they are very small, but I thought I would give them a home and see how they get on. Nothing ventured, and all that.
I've taken a chance and sowed some dwarf French beans into modules, which are destined for the greenhouse and, hopefully, a late crop. The outdoor ones are doing well and although it's the equivalent of about 2 wigwams in pots, it's just about the right amount for hubby and me to keep pace with. I sowed some senshyu yellow onions this morning and plan to put them into the bean bed once the beans are finished.
I'm waiting for a bulk compost delivery on Friday - I have another greenhouse that we (stole) relocated from hubby's mum's place. It had been languishing there for over 20 years and not been used in that time, so he worked hard on refurbishing it and it's now starting its new life and looking better than ever. Initially, I'm planning seedlings and second cropping potatoes so will need some compost to form the beds as it's on clay and building spoil right now. I have a lot of empty compost bags from earlier in the year, so my plan is to wash them out and make drainage holes then grow whatever late crops I can in them in the new greenhouse to see how far I can extend the season. An interesting experiment.
2 x
Top

Elmigo, all pots, hanging baskets and such like dry out quickly. There is such a small mass of soil/compost, that the water just goes really quickly.
1 x
Nothing is foolproof to a sufficiently talented fool.
Top 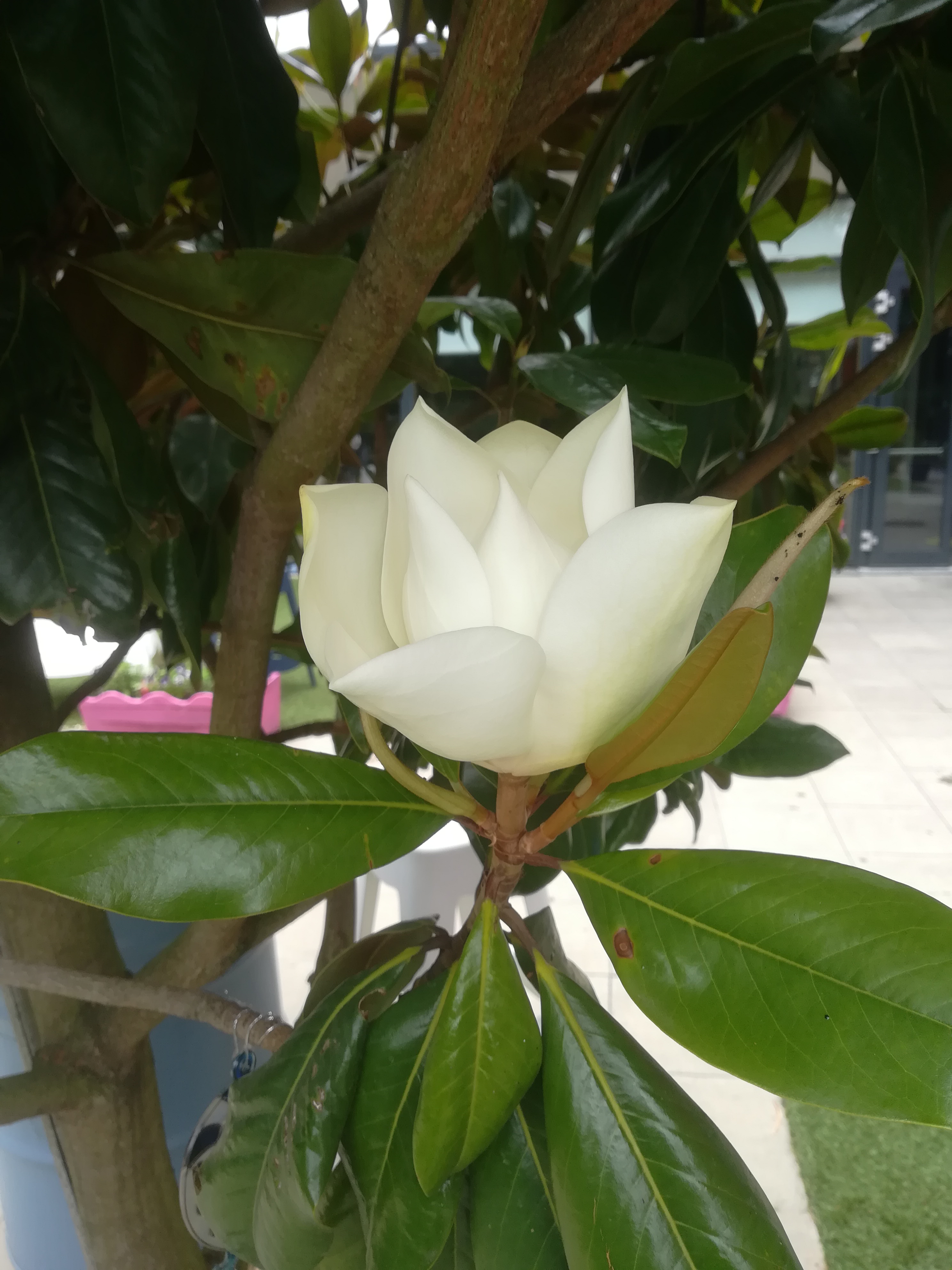 Meanwhile, here is the flower from the laurel tree.
3 x
Nothing is foolproof to a sufficiently talented fool.
Top

vivienz wrote:I shall have to grow some kiwanos next year, Elmigo. They look amazing - kind of like dinosaurs turned into melons.

Definitely worth a try! And if you harvest them absolutely ripe, you also have seeds for next year. That's where my kiwano plants came from this year. They taste delicious!
1 x
Top

Is that really a laurel, Stephen? Absolutely stunning flower! It reminds me of a magnolia grandiflora for the flower, but not the leaf.
0 x
Top

Hi Vivienz - I assume it is a laurel because of the leaves. It is certainly a tree (I can post a picture of it on Monday) not a shrub or hedge.
0 x
Nothing is foolproof to a sufficiently talented fool.
Top

Well Its been a bit of day after getting rid of a load of rubbish to the tip thanks to friends help we discovered the Ivy problem the corner had been hiding in the Garden. We have has several years of not being able to get rid of the previous owners rubble and heap of metal due to different circumstances.

We are now the owners we discovered of a fence that Ivy they may have planted has rotted. So massive job ahead. On the plus side my sunflower came out today.

I would add a photo but not sure how.

How many beans make five?

Deb
If on a mobile phone, select "Full Editor & Previw" button below the text entry box.
Select the "Attachments" tab and you will see an "Add files" button.
This takes you to your images on a phone.
(BTW:- I'm using an Android handset)

I hope that helps. It isn't obvious (or it wasn't to me but I have got to grips with it now)
1 x
Nothing is foolproof to a sufficiently talented fool.
Top

Unfortunately on a laptop as have a phone with a mind of its own but will take your advice to heart if I can get it to behave. However I just discovered it works on a laptop too Yippee!!

Tech stuff can drive one totally loopy sometime. Mind you I did name my two sunflowers Bill and Ben soooo it may be too late for me. How many beans make five?

Users browsing this forum: No registered users and 31 guests