As most of us have planted our potatoes I reckon it's now firmly Spring.

Been clearing the Jasminum nudiflorum off the southern gable end of the greenhouse, decided to dig it up as well. It's been growing in the channels of the aluminium verticals and behind the glazing clips, covering the entire end.
Today I finished the removal and found the trellis panel put in for child safety was beyond redemption. Visible in the background beyond black shed.
As our younger dog likes to stand against the back door to look through I fear she'll do the same with horticultural glazing. So I built a new guard with mostly pallet planks.
Got a bit cunning at the corner with some sheep wire, drilled little holes in the upright, poked the cut wire ends through and turned them 90° with the pliers.

Fairly pleased with the result, much brighter in there.
Finished by setting up a potato tub! 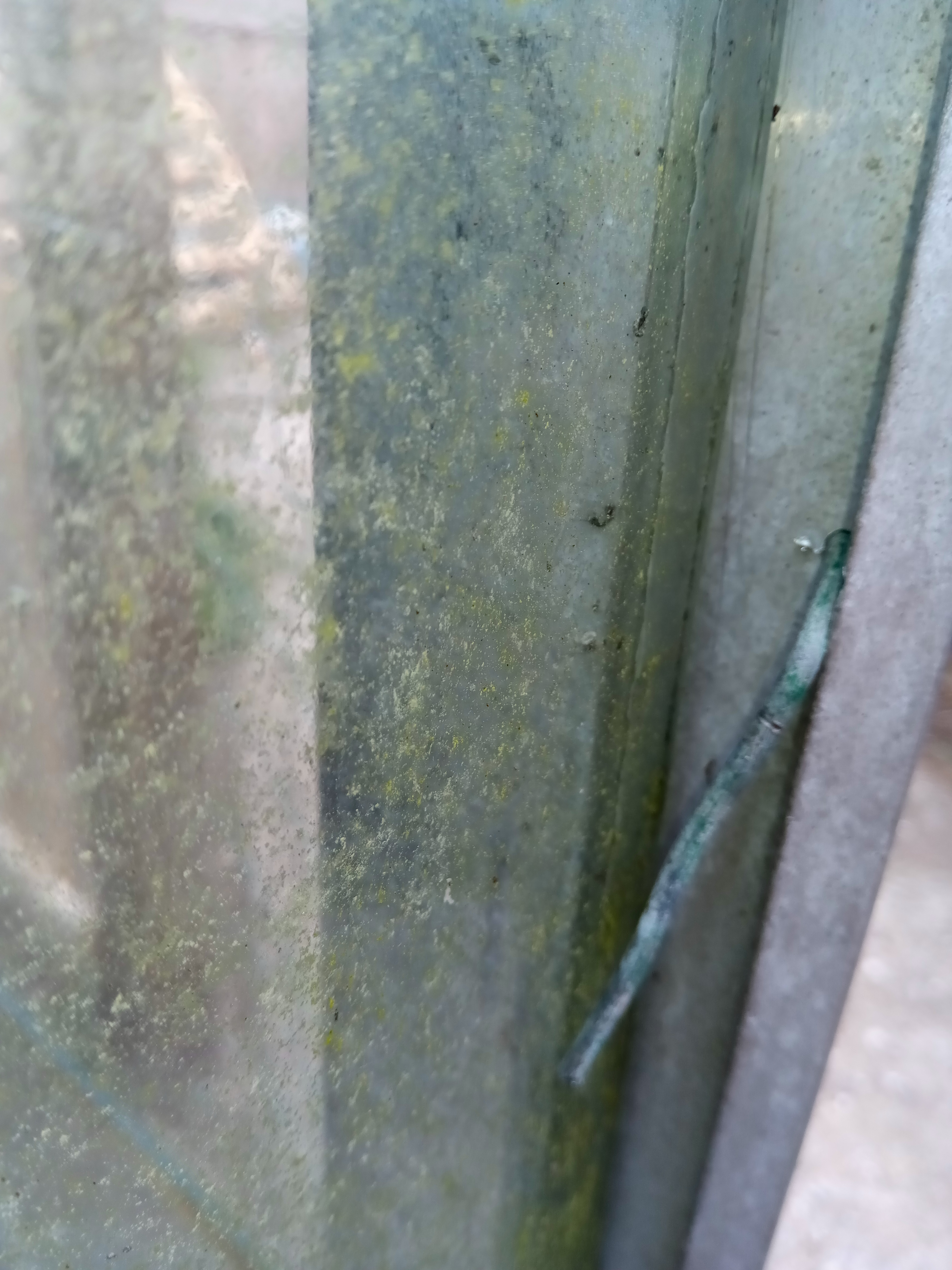 Thank you for setting up the new thread, Peter. I was wondering about the "early spring" bit when the temperatures are going over 20C ....
Another dry and sunny day today but we did have a short and sharp shower overnight (4mm) which freshened things up for the morning. The birds and hedgehogs will have appreciated it greatly, as well as the humans.
2 x
Top

Peter, did you lock the last Bits and Bobs on purpose, as I was interested if any other foods can trigger arthritus off.

Thank you for the reply, Retropants and very interesting...I will have to see if Tomatoes do trigger it off.
1 x
Kind Regards, Old Herbaceous.

We still have snow on the lower hills, the suns been out but the wind is bitter, still very much early spring up here.
1 x
Been gardening for over 60 years and still learning.
Top

Snow still lying! Such a difference to here in the Chilterns.
1 x
Nothing is foolproof to a sufficiently talented fool.
Top

Super duper hot here today, and no breeze. I cycled over to a 'elderly' friend in the next town to say hello, he lives in a first floor flat on his own, so I parked my my bike on the bridge outside his window and called him! He was very surprised.
I managed to forage for some teeny bags of compost at the hardware shop, took them home on the back of my bike. At least I have now potted on my tomatoes & peppers, even if I can't do much else unless the local garden centre comes through with my delivery of jacks magic.
2 x
Top

As regards foods causing problems, I had a single large kidney stone lasered a few years ago and the list of food to minimise is surprisingly large!
One favourite was cranberries or cranberry juice.

I used when younger to consume a fair amount of milk, just cannot nowadays as it triggers my IBS.

0 x
Do not put off thanking people when they have helped you, as they may not be there to thank later.

Wandering down the back garden here this morning..and after a 5 minute sharp shower of rain yesterday evening I'm sure the Early Onward peas have grown,

and the Radeo is lifting towards the wire cover too.

The corn is up in the back field too... Happy Easter everybody. I hope you can find a way to enjoy a break that isn't really a break. Everybody is either on permanent break or permanent work if they are key workers so not a holiday for anybody. At least we can enjoy the weather and get out plotting.
2 x
My Weather
Top

peter wrote:As regards foods causing problems, I had a single large kidney stone lasered a few years ago and the list of food to minimise is surprisingly large!
One favourite was cranberries or cranberry juice.

I used when younger to consume a fair amount of milk, just cannot nowadays as it triggers my IBS.

I too had kidney stones, seems mine might have been caused by Derbyshires mineral water, so that's off my list, have you tried lacto free milk, my and SWMBO have far less digestive problems since switching to that.
0 x
Been gardening for over 60 years and still learning.
Top

Cracking weekend allowed me to finish netting tunnel at last.

Got home and neighbour had 200 litre water butt free to a good home, so thinking of putting it on frame for watering inside.

On a side note seems honey bees like the inside as had to rescue a dozen of so before I shut it up. We had another sunny but slightly cooler day today & I managed to actually complete my 'To Do' list. It was just wee jobs on the list except for digging, feeding & covering the pumpkin bed with membrane. I am always surprised that whenever I get out netting or membrane out suddenly a breeze pops up! Most peculiar! Won the battle today as had loads of stones & bricks handy, but that is not always the case!
2 x
Westi
Top

Decided to leave sorting front flower border and instead got the posts, wire and canes up at the Radeo peas...as forecast said for some rain tonight and didn't want to delay the job and have the peas putting their heads up any higher and thus out of their protective wire cover... 8pm rain has arrived.

...I have a bit of dream of trying a net tunnel some time for giving some potted herbaceous perennials a sheltered start...but having to forget all about that at this time.. Also I couldn't help wonder what station is on the radio in your photo.? Spring well here on the plot, lots of digging and cultivating, sewing stuff in the greenhouse. Spending every day on the plot, I fear further lockdown measures if the numbers carry on like they are, but maybe i am feeling a bit negative.

Anyway having newly retired, I hope to have my plot tidier than it has every been and even better full of healthy plants and produce, I'll remember to take more pics over the next few days.....
1 x
If I am not on the plot, I am not happy.........
Top

That's a fine net tunnel, is it a commercial kit or spectacular diy (you might have told us earlier but I forget)?
I had a potty day yesterday. Potted 44 tomatoes, 26 peppers, 20 cabbages, 12 calabrese, 10 cardoon, 3 eucomis, 60 chrysant plants and took 24 cuttings. Lost track of how many compost mixes I made. Still got a couple of trays of argyranthemum cuttings to do and more seedlings to prick out. Keeps me off the streets!
1 x
My Weather
Top
Post Reply Previous topicNext topic
143 posts

Users browsing this forum: No registered users and 23 guests