26C here this afternoon and still very warm now. We went to the allotment in the early morning just to give the newly planted chrysanthemums a watering, harvest some tenderstem broccoli and garlic for lunch and tie up the sunflowers which are shooting up and needed supporting.
In the garden, the mock orange blossoms are just opening and filling the air with their scent during the day and the night scented stock in the evening. As we were sitting out last night, a tawny owl came gliding very low over our garden and perched on a telephone post further down the road. They are always beautiful to see.
Alas, sweet peas will be in short supply this year because the house sparrows are nipping out all the flowering points!
0 x
Top

Way too hot for me today but things to do so soldiered on. Fortunately I was down at lottie early so got everything watered at my leisure without anyone down there.

Had a good harvest as well (excluding the garlic I've already discussed). Early spuds (although one I dug in the row was a Cara) - maybe leftover from last years pile of clearings & popped up opportunistically when the real first earlies; home guard got frosted, board beans, 2 large punnet's of strawberries, 1 punnet of raspberries which were not anywhere ready when last down, lettuces, peas, took some curly kale leaves, some bolting red onions & a perfect cauliflower.

Now I am feeling both the heat & all the bending. Still 24 degrees down here, but better than 28 degrees at lottie at 11.30! Even the dog was melting! 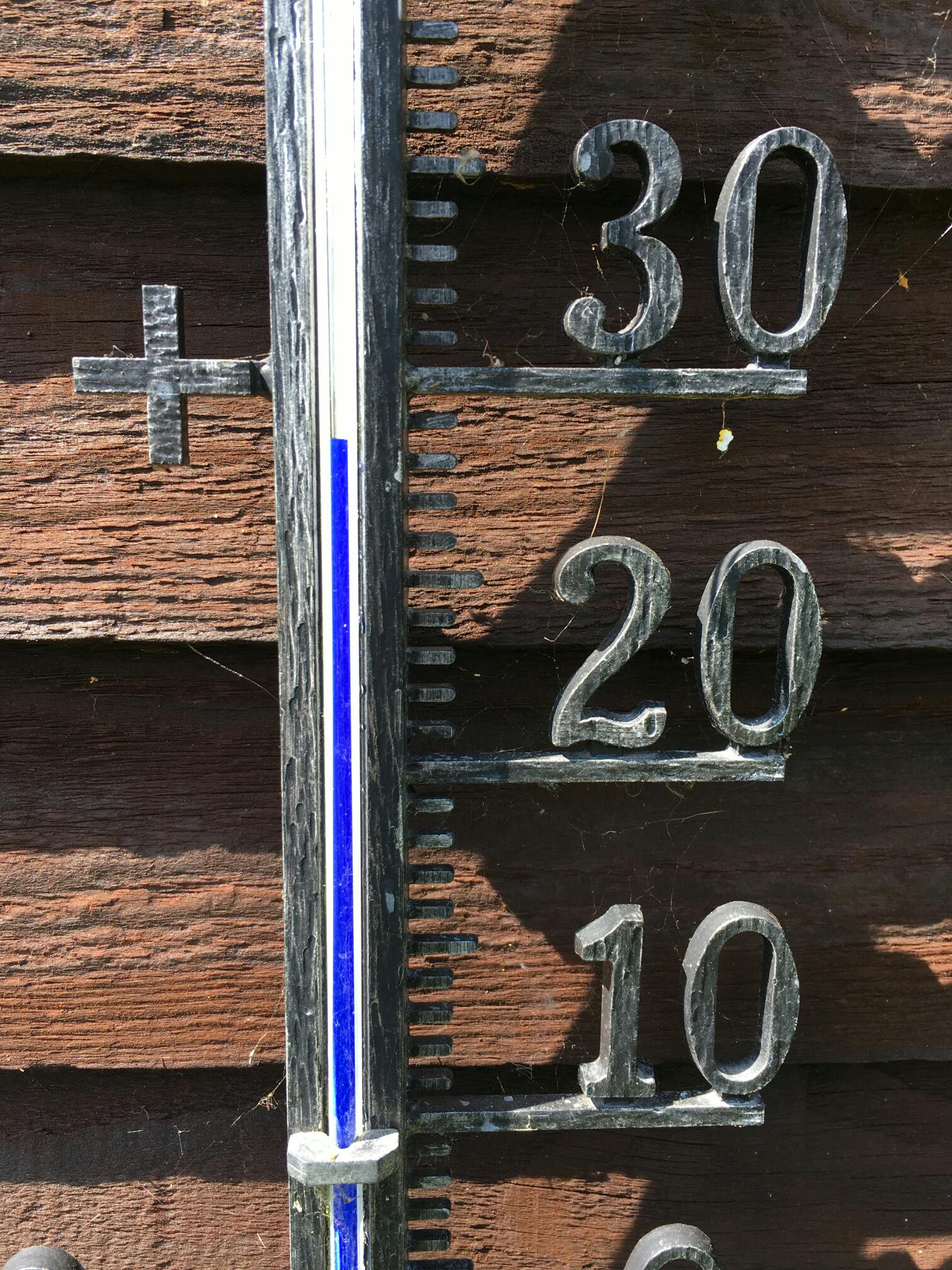 Good news Pa Snip. Glad you got to your plot. I was at my allotment at 7.45 this morning. Should've gone earlier, as I could only manage an hour before it got too hot. Me and mum managed to get everything watered though.
0 x
Top

I'm spending a fortune next week getting four trees taken down and converted into logs and chippings, two of them are very large poplars that I don't fancy tackling myself and the other two are birches that I could just have managed. I do burn some wood on a stove but I think I am going to get several year's supply, the only trouble is poplar is not a good firewood was once used for fire doors apparently. So I am going to spend a lot of money on some dubious firewood. So to prepare for them coming I've been chain sawing everything I had in stock from pruning over the last couple of years which has been an extremely hot and sweaty task. Most things were planted near the beginning of our 30 years here and have gone mad the last few years, from a shelter for an orchard they are shading it too much so lots of pruning required.
When I had recovered from doing that in the heat of the day I went back to my roots. Thinned and weeded the parsnips, swedes and carrots.
Then finished off watching a lovely sunset with crisps and prosecco.
2 x
My Weather
Top

Hi Geoff,
Not sure that you are quite right about Poplar wood because I think you will find that Poplar wood is used to make matches. Of course there are several different Poplars and the wood of one might have flame resistent qualities and another the exact opposite.
0 x
JB.
Top

That sounds like hard work Geoff. I'm sure the crisps and prosecco were a welcome reward. It's surprising how trees planted many years ago grow without you realising and over a period of time can change the whole landscape. We were on holiday recently and visited a couple of stately properties built many years ago looking down from hills over water. At the time they were built there would have been a wide open landscape but over the years trees which were planted then have grown up and when in foliage have completely obliterated the stunning views. I wonder if the original owners would have been so pleased with the long term result.
At least your log pile will make a nice insect and wild life home.
0 x
Top

Most advice is that it is a light wood that burns fast so long as it's nice and dry, so good to use as kindling and to get the fire going.

I removed a row of 10 x 70 footers but it was before I got the wood burner. I used them as seats, sliced to make paths etc to get rid of them but they rotted quite quickly, being a soft wood.
1 x
Top

That's what I was told, before it's fully dry it doesn't burn then it goes to balsa and burns in no time. Neither of the people who gave me quotes wanted to take any away to sell partly because there is no vehicle access into that part of the garden. I've chosen the contractor with a narrow tracked chipper that can get down my mower access path.
I knew about the matches but hadn't heard the fire doors before, I am beginning to doubt it.
0 x
My Weather
Top

Grass and privet cut, looks like we might get some rain, still hot. Greenhouse looking good, most plants now have fruit showing, that's tommies, chillies and peppers.
0 x
Been gardening for over 60 years and still learning.
Top

I thought it was a bit cooler today with a bit of cloud but it is still 28.3. It reached 29.7 yesterday. I had 2 hours watering the green houses, flower tubs and veg before breakfast this morning so I'm being lazy now.
0 x
Top

Indoors with the sunny side curtains shut, shady side doors open and stair for & upstairs windows open for a draught, it is currently 27°C.
Just cleaned the garage for first time in a few (ahem err) years.
Out to wallow in the 10' diameter 2' deep paddling pool for a bit.
Will dip the dog in his smaller hard plastic version first.
0 x
Do not put off thanking people when they have helped you, as they may not be there to thank later.

BBC weather subtitles really on the ball today, predicting temperature as going to reach 232.1 Celsius today !!!!!
2 x
The danger when people start to believe their own publicity is that they often fall off their own ego.
At least travelling under the guise of the Pa Snip Enterprise gives me an excuse for appearing to be on another planet
Top

Oh dear Pa, doesn't anyone check these things. Not quite so hot here 33.3 yesterday, but cloudy and a nice 15° this morning.

There was a bit of dew forming last night and the lawns were alive with dozens of frogs from 1 inch to full grown and it was intesting to see all the different colours and patterns from green to yellow to dark and some fancy ones with green patches and black stripes. Must have been camouflage to suit the different parts of the garden they live in.
0 x
Top

Good job I'm off work this week, thieves visited our road last night and emptied my neighbours son's van at 02:20.
Fun and games ensued, I thought the subaru noise was the son being delivered home by his mates. Two lady neighbours opposite realised they were opening the van. I wondered what the torches and female conversation was. I called the rozzers while the ladies woke the van owners house.

The police arrived with a motorbike in tow, the rider grabbing them to say three blokes in balaclavas were burgling a van or a house quarter of a mile away and one had nearly knocked him off his bike.
So the rozzers departed without talking to us, never to be seen again.
A second cop car turned up later, asked is that the van, got out had a look, had a radio call and left at speed with the blues on, never to be seen again.

After checking the road for other thefts I found our new motorbike friend and the neighbours having a natter, one lady had made tea, the biker had a glass of water. So I rang 101 and asked if they needed anything, like the bikers contact details, the control room took those and we all b*****ed off.

By then it was half three, getting light and the birds were starting the dawn chorus.
0 x
Do not put off thanking people when they have helped you, as they may not be there to thank later.

Users browsing this forum: No registered users and 59 guests