by Primrose
i'm going to dig my autumn raspberries up this year. They were always going to be a risky experiment growing them in a north facing border which is the only space I have for them. They haven,t even started to show any flower buds yet and have never cropped well.

by Johnboy
Hi Primrose,
My Autumn raspberries are only just showing signs of blossom but my pruning regime veers from the norm. Pruning is normally done in February and we leave one cane on each plant which provides an early crop which I have been picking for a couple of weeks now and when that supply ceases only then do we prune these canes out.
I take it that by north facing there is no southern aspect or probably a fence. We are lucky here as we have no fences and no light restrictions. I would a least wait until the autumn period is over and then make your decision.

by oldherbaceous
Looks like we are in for a roasting, over the next three days, here.....

oldherbaceous wrote:Looks like we are in for a roasting, over the next three days, here.....

I spent two hours early Tuesday morning watering beans, peas & sweetcorn on the plot.
Went back Tuesday evening to pick some peas and the ground was like dust just below the surface.

Also had a bit of an incident involving hot air of a different kind locally in the morning. I was on my way to the plot when a hot air balloon appeared. We do see them quite often but usually in distance to the west as they seem to keep out the way of our local private airfield and the Heathrow flight path.

This one appeared to be struggling to avoid coming down on railway line, M4, town centre or indeed a house. 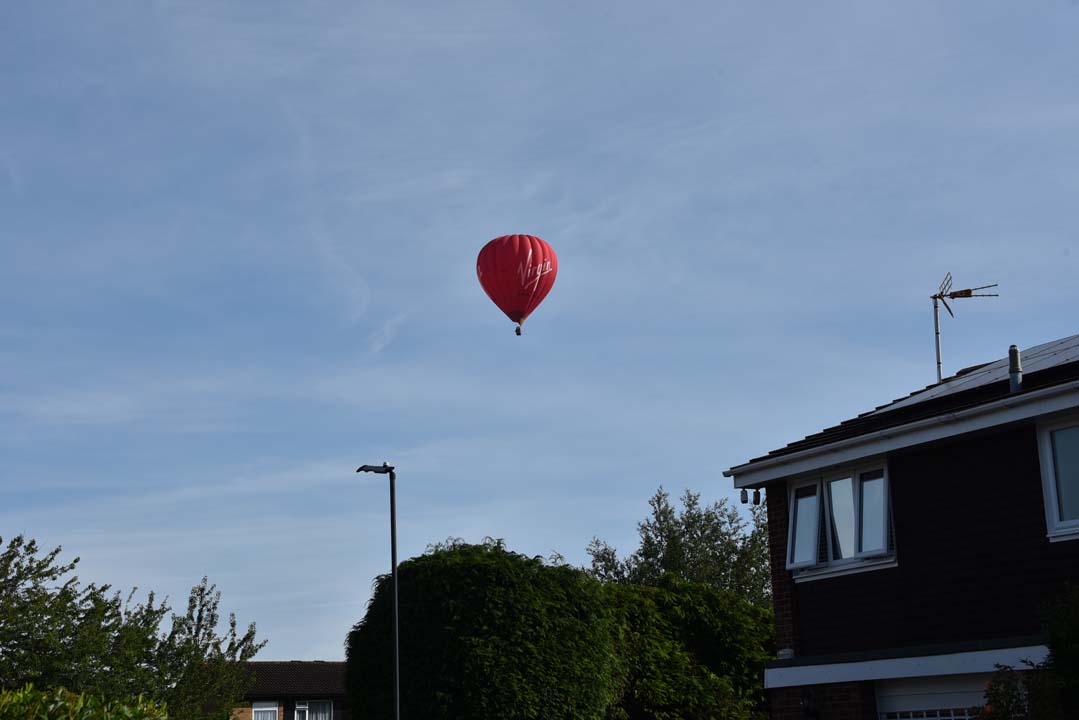 by Primrose
Interesting photos Pa. don,t know whether that was an emergency landing or not but some golfers will enjoy any old excuse of distraction for playing a lousy shot! Could have caused problems if it had landed on the M4!

by Pa Snip
Virgin Balloons told local paper it was , and I quote, "A normal landing"

by Primrose
Well I'm sure you would have had something to say if it had landed in the middle of your plot and crushed all your vegetables.

by Geoff
Anybody else been trying "Kitchen Garden Live" from Hampton Court Show on BBC1 at 11:00am (and on iPlayer where we watch it) everyday this week? Bit strange but at least it has been focusing on fresh grow your own ingredients and visiting chefs that grow.
What's the difference between harvesting and foraging? Harvesting is when you grow it or pay for it, foraging is when you nick it.

by Pa Snip
We have a plot holder who is regarded as somewhat arrogant by a few of us, one of his traits is to connect a hose two or three times a day. He then proceeds to leave the hose running whilst doing something else. Eventually he will move the hose until the plot has all been watered to his liking. This usually takes him about an hour to hour and a half each time.

Can anyone explain the benefit of watering at 3pm yesterday when the temperature was 30+ degrees, surely more will have evaporated than got taken up by plants.

by richard p
presumably evaporation would cool the plants, and some of the water would enter the soil,...if hes not paying for the water using it efficiently wont be a concern.

by Colin2016
I have noticed farmers water during the day.

by Primrose
To be honest I sometimes water at the roots during a hot day if plants seem to be really drooping and look in distress from the heat but wouldn't use a sprinkler during daytime to avoid scorching the leaves in the sun afterwards. I also worry a sprinkler runs the risk of increasing blight spore spread if the spray comes anywhere near my outdoor tomato plants although perhaps I'm worrying unduly about that.

However connecting up a hosepipe on an allotment plot and hogging the water for such a long period of time is rather different to using it in your own garden where nobody else wants to use it. sometimes you just have to water when time permits even if it's not the best recommended time of day but on an allotment that,s just plain selfish. Possibly time for 't committee' to have a tactful word and perhaps out a time limit on hosepipe use?

by Pa Snip
Hi all, thanks for the replies so far.

Colin
Yep I also have seen farmers watering during the day, Huge commercial hose reels carrying at least 2 inch bore hose. Pumping out huge amounts of water which is pressurised though a huge pump I suspect. Their water may originate from mains but I suspect a lot pump from boreholes.
They are commercial and have a hard enough job as it is, never mind if they couldn't water.

robo,
you're right about paying. Water is included in our annual rent.

Primrose
You've hit the nail on the head.
People waiting to water.
Seems a bit of a liberty and very selfish to be watering 2 or 3 times a day

No committee though, run by a council employee who seems to avoid involvement as much as possible

by Primrose
Suggest dividing an hour's watering time by the number of people waiting to water so if six people want to water you only get ten minutes each ! Concentrates the mind on those plants in greatest need !

by Westi
We don't have anyone that greedy but there is always a queue to the tap particularly on the weekends when it is the only time for some of us to get down. I always unwind my hose and lay it near the tap & give the current user a cheery 'Me next thanks'! Gives them the hint not to muck around, but then puts me under pressure as well to water quickly so I tend to go down very early & water when no one around.

If someone wanted to water their plot then I think they should just say 'You've watered already do you mind if I quickly do mine'? If the response isn't positive then I would just say something along the lines of I'll give you another 20 mins then I will have to water my plot as ??? - maybe visit a sick relative, dentist or whatever.

Then it would be a letter to the council signed by as many plot holders affected as possible, with a reminder to them that this individual pays the same rates, but they are picking up his excess! Anyway he will have over pampered plants that aren't hardy or tasty & for any reason he can't get down they won't last long with their limited root depth!