Geoff. I know how you feel. We had to have our Jack Russel put to sleep last year. Still miss her.
0 x
Top

Your sad news got me crying again, I'm such a girl.

Beti constantly reminds me of Molly who died just over a year-ago now, or was it two years ? I used to feel so lonely walking up the fields by myself after she died and almost stopped walking altogether which didn't do me any good. Even though my walking is uncomfortable I need to walk.

Raising and training a puppy is hard work for me, progress is four steps forward and three backwards but she is learning and we could have chosen an easier breed but we love Cocker Spaniels. 0 x
How are you supposed to start and maintain a healthy lifestyle if it completely removes a wine lover’s reason to live?
Richard.
Top

Morning Geoff, i often think how sad all the happy memories are of our pets are, but, it would be even sadder if we didn't have these memories at all....I still think about my Whippet, Cass, quite often, but at least the hurt has eased over the years.

Still haven't been brave enough to get another dog though.....
0 x
Kind Regards, Old Herbaceous.

So sorry you've lost your lovely dog. It's a beautiful photo and you'll never forget all the lovely times you've shared. I still miss my last dog and she died eight years ago.
0 x
Top

Thanks for all your kind words.

Memories are the real immortality.
0 x
My Weather
Top

Not nice out there - my weather station just recorded 72.9 mph. Then there's the rain.
0 x
My Weather
Top

Geoff, we went for a walk this morning and the wind actually stopped us in our tracks. Then the rain came and it has been really dreadful. And our weather station battery gave up and we don't have a spare. So the interesting weather that we are having at the moment won't be registered.

Another wet weekend here, with nothing done on the allotments, again. Let's hope it is drier after Christmas, when i get a bit more spare time, i can then get some Winter digging started.
0 x
Kind Regards, Old Herbaceous.

Blowing a beaut down here as well as lively short showers, so didn't make it to lottie, but did manage to clear up most of the back garden & move the patio pots closer to the house & weed between the pavers. Not without it's challenges though, but feel quite lucky I saw where the polycarbonate roof sheet from the greenhouse went, as doubt I would have found after another couple of gusts.

I don't know what the wind speed was but I had 1/2 small trug of weeds & that blew down the garden as well, and they had clods of soil attached to them. Certainly not the strength Geoff got here at home, as luckily fairly sheltered but expect it was pretty impressive down on the quay a couple of blocks away.

Just back from a day out to Bournemouth, where son & his fiance moved to after finishing university, old dog was very happy to refind her pet human, young dog liked the windy beach a bit too much.

0 x
Do not put off thanking people when they have helped you, as they may not be there to thank later.

Was a bit blowy but Bournemouth is quite nice regardless! Go further south next visit Peter! Christchurch & Mudeford are in the grips of the rich people takeover (maybe), see it before they take the soul out of it! Working quays, snuggle pub with a great fire, fantastic beaches, great headland with a Noddy Train still! Love where I live!

I started to access carrots I had sown late and then neglected, neglected in that the whole bed was sown with various bits of salad, marigolds and the carrot. I put the enviromesh cover on then neglected the whole bed along with others when Beti arrived and all my time was taken by a naughty puppy but those carrots are the first carrots I have grown that aren't contorted. The bed has stones in it just like the other beds and when I filled the bed with soil it went over the top of a layer of cow-poo just like the other beds so I haven't a clue why these carrots are better.

Did all those weeds that I would have normally removed weekly but left to grow into giant weeds take the nutrients the carrot doesn't like ?

All my early morning dog walks are chosen for the wind direction so I can get some shelter from the hedges and banks. I didn't take readings of the wind speeds, the local forecast was for gust speeds of 59 knots (about 65 mph I think)but it s never as strong as the forecasts. We probably had 30 knots, it's difficult to walk in 30 knots and impossible at 40 knots, everyone and the forecasters seem to exaggerate wind speeds. My anemometer packed up years ago during a storm and I didn't replace it, just left the burgee on top of the pole. I think I can tell wind speeds by the way and sound of the slate roof over us. Sounds daft but I did prove it in the same way as when sand on a sandy beach starts lifting it'll be 25 knots or more.

Sailors are rascals for exaggerating wind speeds.
0 x
How are you supposed to start and maintain a healthy lifestyle if it completely removes a wine lover’s reason to live?
Richard.
Top

Although the device said a gust of 72.9 mph when we looked at the display when I downloaded the data this morning it hadn't recorded it as that high though still pretty fresh. 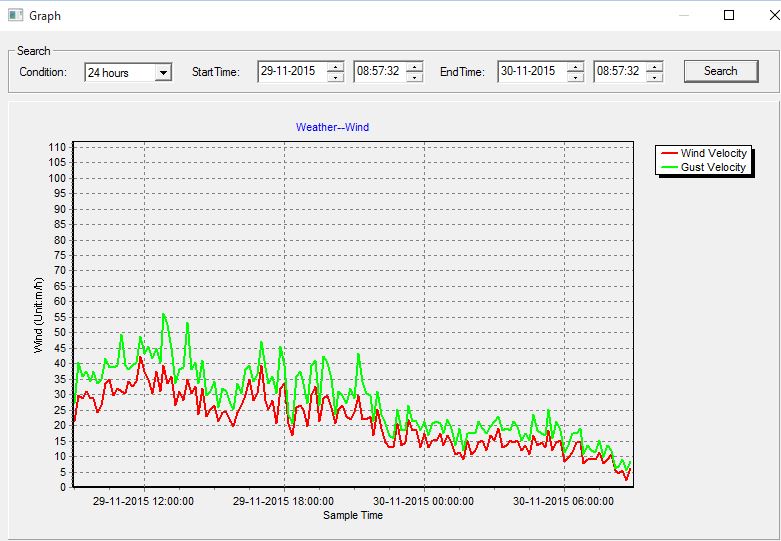 Noted that the wind scale goes up to 110. Now that would be pretty gusty!
0 x
Top

I had some heated exchanges about wind strength, with mostly sailors and other water-sports.

I spent over £100 on a hand held device used by airport staff, some handheld devices are notorious for being inaccurate though the level of accuracy is usually unimportant once you get to know a devise. Most people taking a wind strength reading just need the reading to relate to previous readings or to the effect that result had.

Why would us at ground level be interested in the wind strength at the top of a 100 foot tower or a buoy three miles offshore ?

The wind slows rapidly at ground level and is often sent in various directions rather than the true direction.

Roof slate or other coverings are usually sucked from the lee-side (downwind) as the wind curls over then sucks in much the same way as your hatch-back gets all the filth at the back. Our Beetle doesn't get filthy at the back but the golf does.

Our telephone lines are at this moment, and have been for a few days, resonating at a critical level that results in failure. Some are actually snaking and creating a wave-form, I wouldn't be surprised if we loose the BT service soon then have to wait weeks before they respond.
0 x
How are you supposed to start and maintain a healthy lifestyle if it completely removes a wine lover’s reason to live?
Richard.
Top
Post Reply Previous topicNext topic
187 posts