It's that time of the year when the feast comes, so I thought I'd start a new thread to see what everyone is harvesting & what they plan to do with it.

Obviously ignoring the flowers, the cabbage is from my last years winter crop, so been in for a whole year! I'm going to try Sauerkraut as have 5 more cabbages ready as well, but as they have stood so well no urgency to harvest them all - & i have to look at some recipes as have never made it before, also might try some Kimchi. (Another first). The courgettes are being shared with he neighbours. Mine will be fritters with melted brie & cranberry sauce on them, tomatoes are the KG special, I've got loads so neighbours, Kohl Rabi will be grated into my salad for work tomorrow along with the carrot. Neighbour can have the apricot raspberries, I've got 2 lots in the freezer & plants heaving with them, blackberries mine to go into a blackberry & apple pie.

These are another bag of apples, both are eaters, not cookers but the Russet is a bit of a duel so some will go into the pie. The rest will be for store. Won't pack them up yet, like to wait a few days to make sure they are 100% sound before they go in the trays.

But I still have masses of tomatoes ripening, peppers and chillis nearly ready to pick and apples a little later in the month.
0 x
Cred air o bob deg a glywi, a thi a gei rywfaint bach o wir (hen ddihareb Gymraeg)
Believe one tenth of what you hear, and you will get some little truth (old Welsh proverb)
Top

Dear Westi, wonderful pictures.....now if that doesn't give new comers a bit of inspiration. i don't know what will.

On the harvesting front,

Runner and French beans,
Marrows, courgettes and cucumbers,
Carrots and salad stuff and plenty of fruit.

But regarding what is done with it, well, it's passed on to cook and others to turn into glorious feasts.

OH, your Cook spoils you methinks!

Today I picked (because my husband 'forgot' to go to the allotment while I've been away):

12 courgettes/marrows
Massive amounts of ripe tomatoes
6 sweetcorn (to make into relish) - yay, the rats haven't got them (yet)
Bucket loads or runner and French beans
Cucumbers
Picanti peppers (red and hot)
And in the back garden some cucumelons (bit odd)

I'm like the Easter bunny, but I leave courgettes on all my neighbours doorsteps instead of chocolate!

I've been picking my new sweetcorn for the past two weeks. It is keeping it's sweetness and the cobs are nearly all well filled and a good size.

I've been trying the new Swiss variety from Real Seeds and am very pleased with it. I usually grow the hybrid Lark but thought I would grow an open pollinated one so I can save my own seeds.

Real Seeds also have a new variety with red and white seeds. Has anyone tried this, and is it sweet and tender?

Sorry if I've said this before, I might have posted it somewhere else

I'm never growing sweetcorn again - 3rd year running every cob has been taken, by what I now know is rats! I'll use the space for something else, even though I know that it would be delicious & have sweetcorn envy.

Rats have had a feast all over the site, everyones moaning about it!

Too many chickens, not enough chicken hygiene. Something needs to be done. No complaint about most of the chickens, they're happy & healthy & their environment is enriched but the owners need to look at the enclosures & feed storage!

Well not exactly harvested but amazed at the late growth spurt of my Jerusalem Artichokes! Farmer did the hedge row at the back so they really show against the sky & you can appreciate their size - my guess is 8 - 9 foot high. Loads of flowers as well this year - hopefully the tubers will be huge as well! 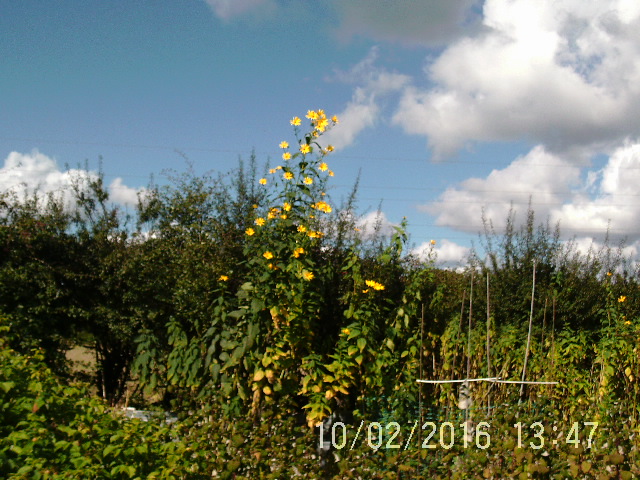 They are lovely. I've moved mine and think the slugs have finished them off. I've never had flowers on them. Might have to look if there is any sign of them tomorrow.
0 x
Top

I've picked a few last brave beans, some tomatoes, and my autumn raspberries (which always tend to disappear down my throat before i reach the kitchen door. ). I have lots of red and green curly kale waiting to be picked so will be hunting for some recipes for innovative uses.
0 x
Top

Westi wrote:.... Too many chickens, not enough chicken hygiene. Something needs to be done. No complaint about most of the chickens, they're happy & healthy & their environment is enriched but the owners need to look at the enclosures & feed storage!

When I had chickens at my mums place, the rats arrived from the potato farm next door, bored by a diet of dumped damaged potatoes, trailer loads.

We had excellent hygiene, the little b******s waited till me fed the hens, then came out and competed for th strewn pellets, they could, we found later, climb into the galvanised feeders.

In the end I spent many hours behind the hedge, that hid the run from the rest of the garden, with my telescopic sight equipped air rifle. Got about a dozen, the later ones were very wary, had to shoot at the beady eyes peering out of the hole.

PS didn't want poison because of the dogs.
0 x
Do not put off thanking people when they have helped you, as they may not be there to thank later.

Funny you bring up the rat Peter - also had one of them visit me yesterday. Went down the back to the table & there were loads of flies, then looked down and there was a big rat just sitting there covered in flies, obviously dying from bait I'd say. Managed to show it the hole in the fence it came from - the fly trial was quite helpful, then filled the gap with rocks & bricks.

Felt a bit sorry for it for a moment - but quickly passed.

Yes, watching rats die from poison is not a pretty sight. We had a Pest control company come in to put bait boxes down a couple of years ago when we had an really bad infestation of them because I didn't want them running and urinating all over my vegetable patch. To watch them slowly staggering all over the place was horrible. Shooting is far preferable, but they move so quickly you barely stand a chance of getting them, even if you own a shotgun. What we need is a modern Pied Piper of Hamlyn.
0 x
Top

My cat tried to bring a rat in when I called him in last night. He spent ten minutes crunching it down from head to tail outside, and then had a dish of Go cat for afters when I let him in. Gruesome, but one less rat. I hadn't seen any signs of them, but as they say, you're never far from a rat.
0 x
Top

Made me smile PP!

Cat's hey? I love a proper cat & you sound like you've got one! I currently have 4 kittens plus my own two adults - please no comments about my irresponsibility, I didn't know she was pregnant until too late & they all have homes - one with me! The kittens Mumma is the one for me - she can spot a spider in the greenhouse & send it off & many a mouse delivered to the back door!

Rat - might have to chase her off one of those going on the size of the one on lottie!