Time to plant the little guys! Because I like to experiment with this I'm putting a kiwano inside the greenhouse, but also one in a container outside (just like last year). If the season is too short there will always be a possibility to move it into the greenhouse. Right now the plants are -admittedly a little early- being permanently placed in the greenhouse. The temperatures are well above freezing and even above 10°C at night inside there.

After planting my corn in a block for better pollination, I will be busy with the kiwano seedlings. Pictures will probably follow very soon as the first signs of growing in full soil have been noticed, as well as the rise of enthusiasm about it!

That feels a brave decision planting them outdoors already but maybe your temperature is warmer than ours with heavy rain and a bitter wind. And I guess you have a few spares if things take a dive esrky on. I have only one reasonable seedling now so will be patient a while longer and try to nurture it. When it goes outdoors it will have no shelter so will have to take its chance.

I imagine you're already short of space in your greenhouse. Would some kind of folding bench support with a wide wire or aluminium see-though top sheet which lets light through give you more growing space ?
0 x
Top

That is actually an amazing idea, and indeed I have plenty of spare plants to cover the risk. I assume it won't be freezing anymore and temperatures will stay here or get warmer, the weather does not predict any lowering tenperatures either but it's raining a lot. I'm not going to complain about that

I decided to move my plants outdoor in the middle of May, temperature was pretty high (between +15 and +20), so I was happy to move them outdoor. Sadly, 3 days later, unexpected frost and 2 cm snow precipitate destroyed all of them. So I was forced to start from scratch again, but it's pretty hot currently, I am not expecting any winter attack again (I hope

That's bad luck Giaur and so easy to get caught out when we seem to be having a run of good weather. now
I have three rather fragile plants being grown for the first time which I've recently planted out in front of trellis against a south facing fence. They're going to have to compete for space with tomato plants, so I'm not sure how they'll cope but as most of our growing represents a risk of some kind I'll wait and see.
0 x
Top

The new messages reminded me to post another kiwano update! Almost forgot about it as I'm quite busy, but not too busy to take care of the plants (fortunately).

In the meantime a lot has changed and they have been placed in the greenhouse as well as outside. The kiwano shoots go literally everywhere and I absolutely have to cut them off every day! It's close to impossible to keep track of its growth.

As I have a greenhouse this year, as an experiment, I've planted my kiwano seedlings at the end of may outside and half may in the greenhouse. The one inside the greenhouse is out of control now but the little guy outside seems to be growing normally. But I do understand why kiwano should be grown in a greenhouse!

However, there are people who say it's impossible to grow outdoors. I think the picture below and the pictures at last years balcony are proof it's not.

KIWANO OUTSIDE
It does not have too large side shoots. It actually needs a trellis but I could not find one on time so this is it now. I'll find one soon! Somehow the leaves get slightly yellow edges and the leaves get a darker green color. Very fascinating! It's probably due to the outdoor conditions. I remember the same happening on the balcony last year, despite temperatures touching the sky at 45°C! 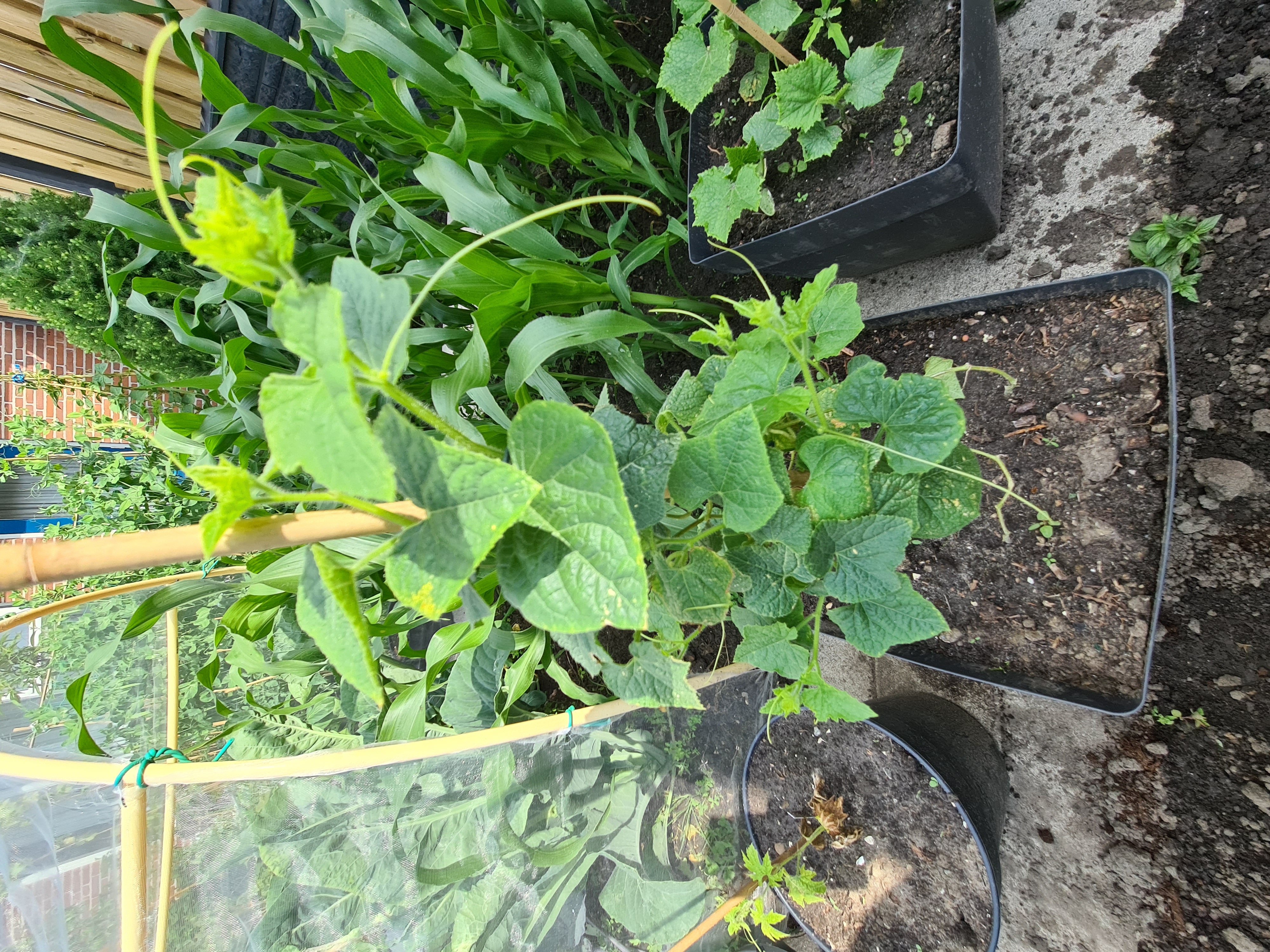 KIWANO GREENHOUSE
Overall looks very healthy! I've never grown one in the greenhouse but the side shoots started growing through tomatoes and cucumbers, making it impossible to track back unless you cut it off at the base and carefully pull it out. It seems very happy in the greenhouse and the leaves get brighter green, no yellow edges and overall a faster growth. Inside the greenhouse I let the temperature touch 43°C before every door and window goes wide open. It seems you underrated kiwano. Much more room required. It will take all space inside your greenhouse. You will be forced to cut it off. That's mine today - outdoor: 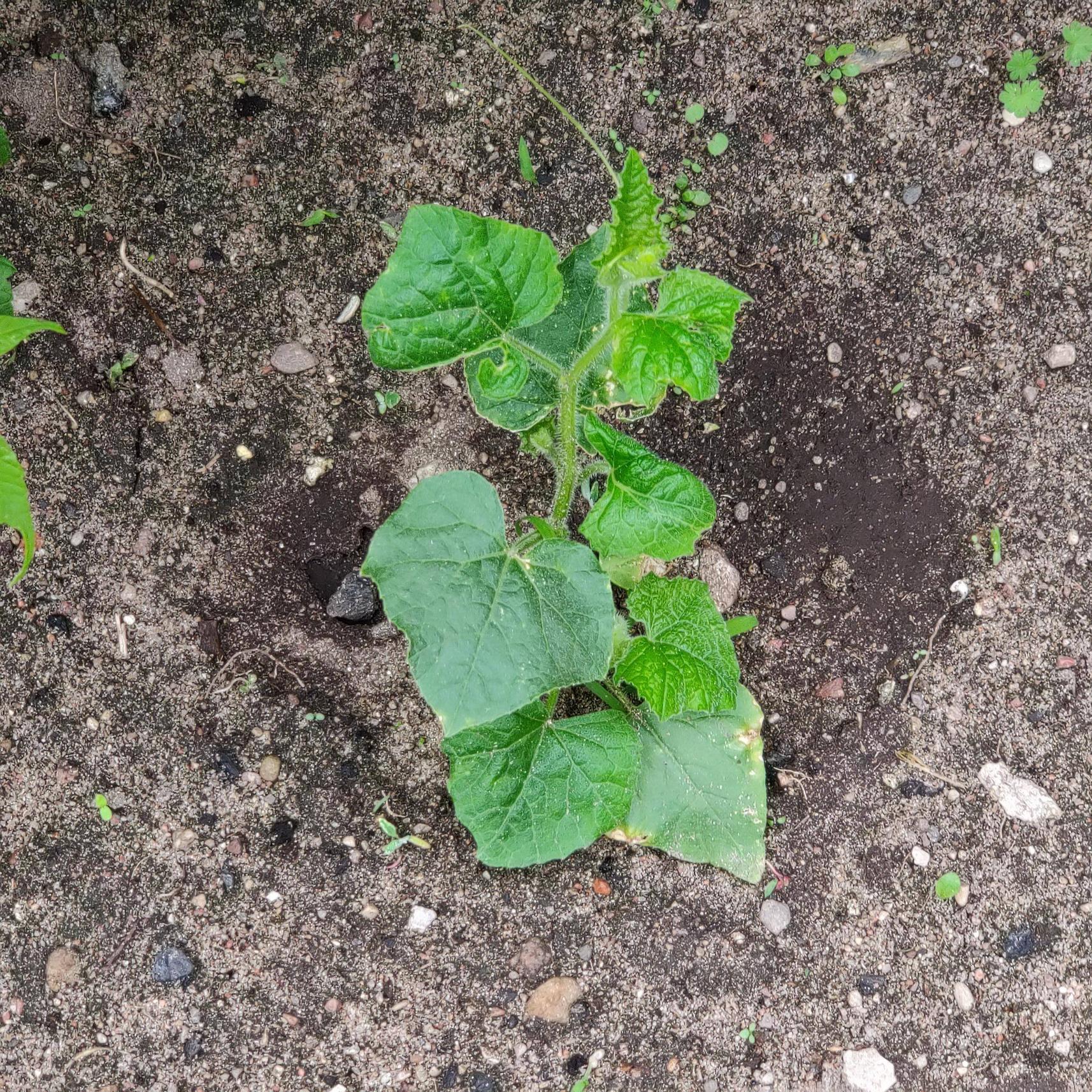 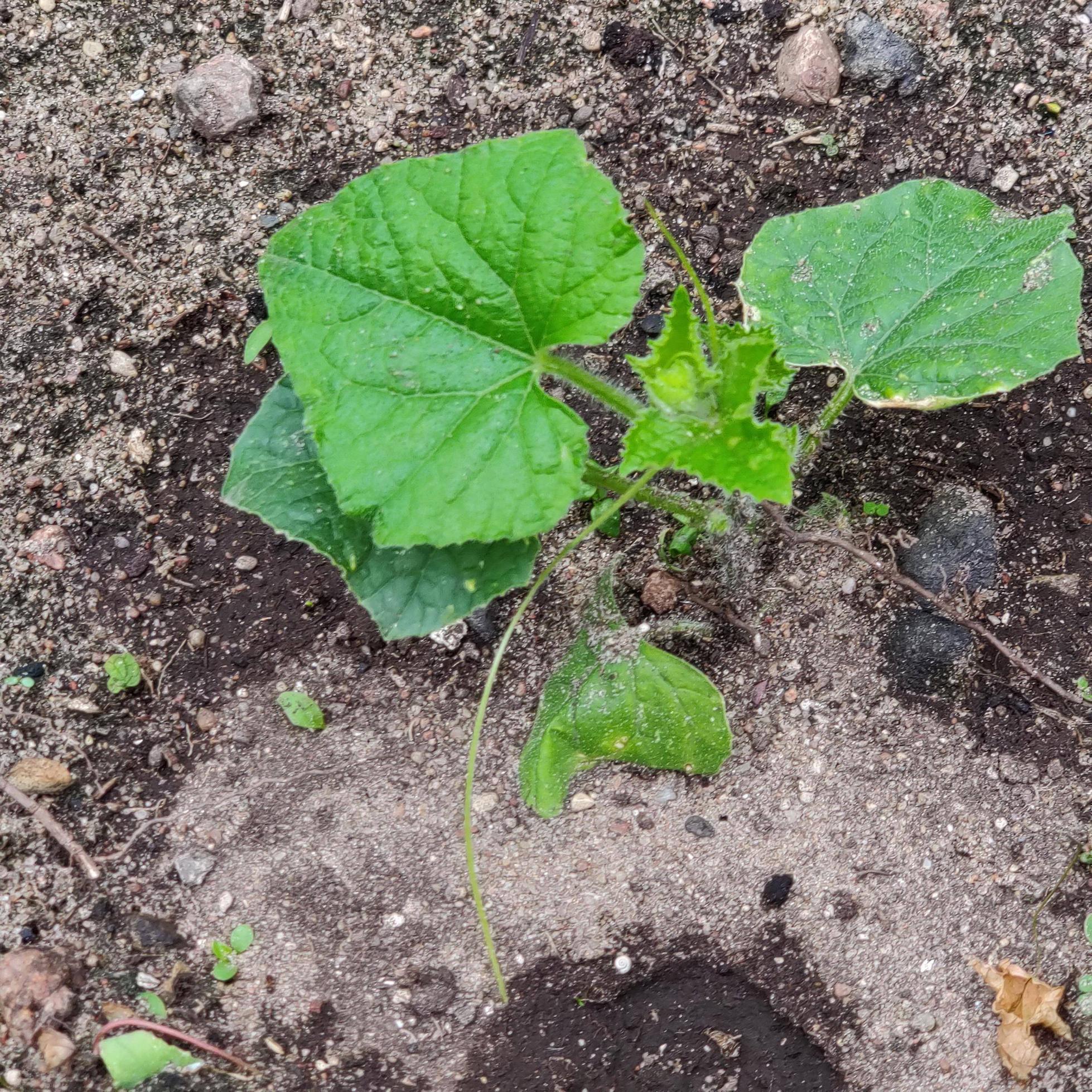 Giaur - where are you located? I know Elmigo is in Holland and it would be really helpful to compare notes to see if there,s anything we can learn from each other's experiences , especially on climatic conditions, as growing these is a new experience for all of us.
I,m really growing in the dark here. Have never even been able to find the fruits in the supermarket to buy and try, so it would be fun to Achieve even a modicum of success.

I think my last completely new experiment was growing tomatillos which was a one off as I,ve never really had enough growing space to grow on a sufficiently large scale to be able to experiment with them on a bigger scale culinary basis. However that doesnt reduce the fun and interest of trying something new and expanding one's knowledge and experience.

I like and hate in equal measure the amount of time these experiments take but if there,s anything to be learned from the time they take in terms of the time taken from seed sowing to picking any crop, it,s the art of patience. In today,s world of instant gratification, that,s probabky an art gardeners are used to cultivating !
1 x
Top

I'm located in Poland. So - usually more hot summer, but also more cold winters. This year we got cold May and as I mentioned, my kiwano plants have been destroyed. So I'm delayed 2-3 weeks, we'll see how that affects final crop. I hope summer is going to be hot, so my plants will able to make up the time.

My new experiment this year is Colocasia Esculenta ( I also have one indoor, now newest leaf is 50 cm long), a few sweet potato varieties (to see which one is the best in my climate zone - short summer, so it needs to grow fast and create tubers quickly), and quinoa (I got some success last year, now I have planted much more seeds)
0 x
Top

The question of sowing time to cropping time is obviously dependent on many factors such as temperature, light, water, nutrition so what works in one country,s climate will not necessarily work in another. Will look forward to your progress reports.
I have to say thwt the structure of my Kiwano plant looks so fragile that I cant currently envisage how it will ever be strong enough to bear the weight of any fruit. Time will tell!
0 x
Top

That's true, worse conditions (in this case, low temperature) means slower growing and more time to fruit. So, more hot climate is better. From other side, longer but colder summer may also give some results. In my location, summer may be hot, but also short, so if you give it more time (even with slighlty lower temperature), possible you can get better result than me. Kiwano is able to grow when temperature is 15 C or higher.

And, from my experience, you can't count on any result when keep it indoor. Greenhouse (but I am not sure if anybody owns so large greenhouse) or outdoor if you want fruits
0 x
Top

Primrose wrote:how it will ever be strong enough to bear the weight of any fruit

They can crawl really well, just like (water)melons. Eventually the parts that bear fruit could be supported by a wire carrying a small net or something. Watermelons require the same kind of support.

Mine looked VERY fragile as well, but with a little time and slightly higher temperatures the plants started to skyrocket and in no-time they looked healthier!

Do not underestimate my growing skills, I can grow anything anywhere

but all jokes aside, it might have too little space. Professionals often prune their cucumbers for fruiting and keep only three to five side shoots. I don't think kiwano is any different when it comes to pruning. Shouldn't be a problem.
2 x
Top

I think better don't prune anything and prepare enough space instead to get bigger crop. This plant is strong enough to create many big fruits, prunning is not required. You only need to make sure you have provided enough amount water (water is required to make fruits, as they contain mostly water). 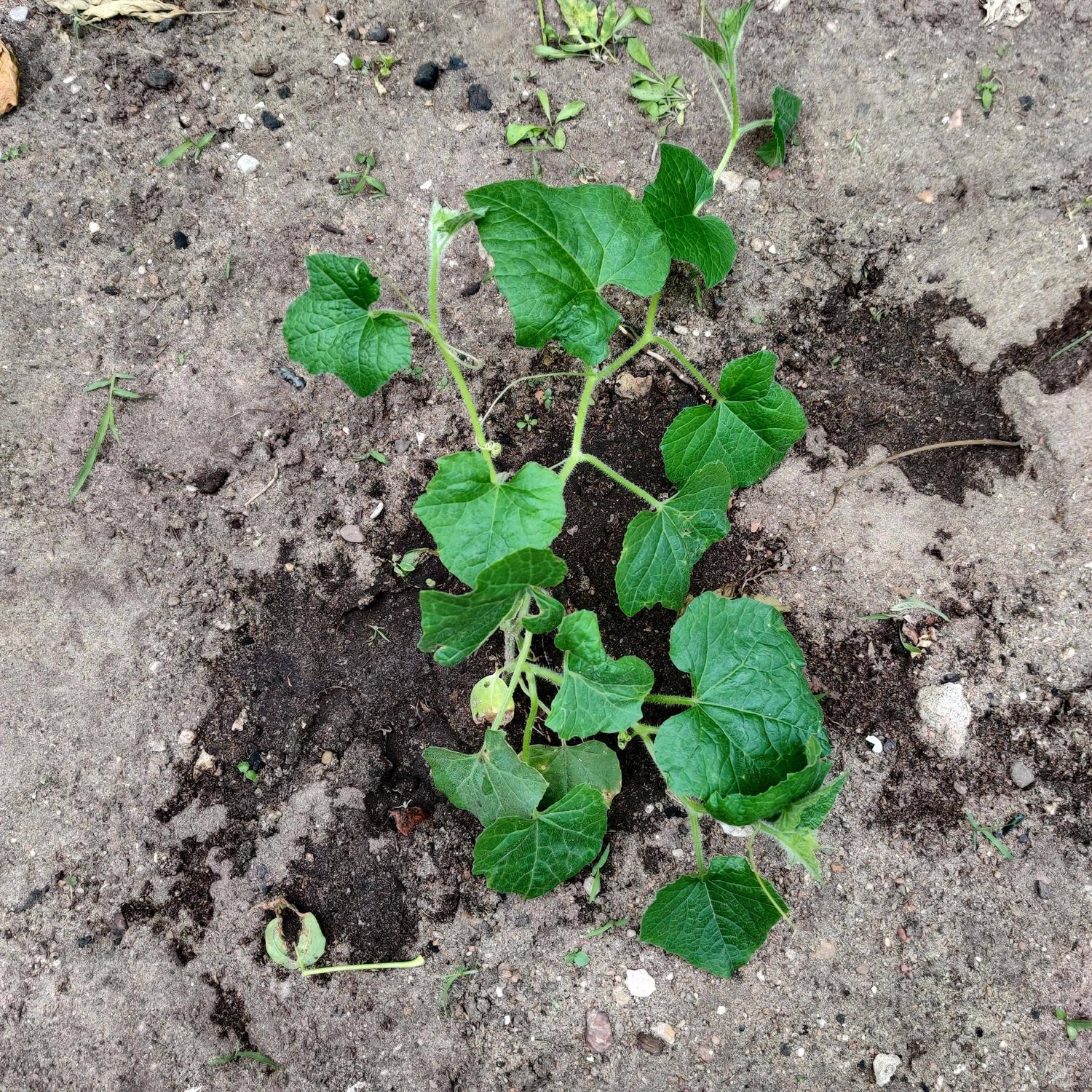 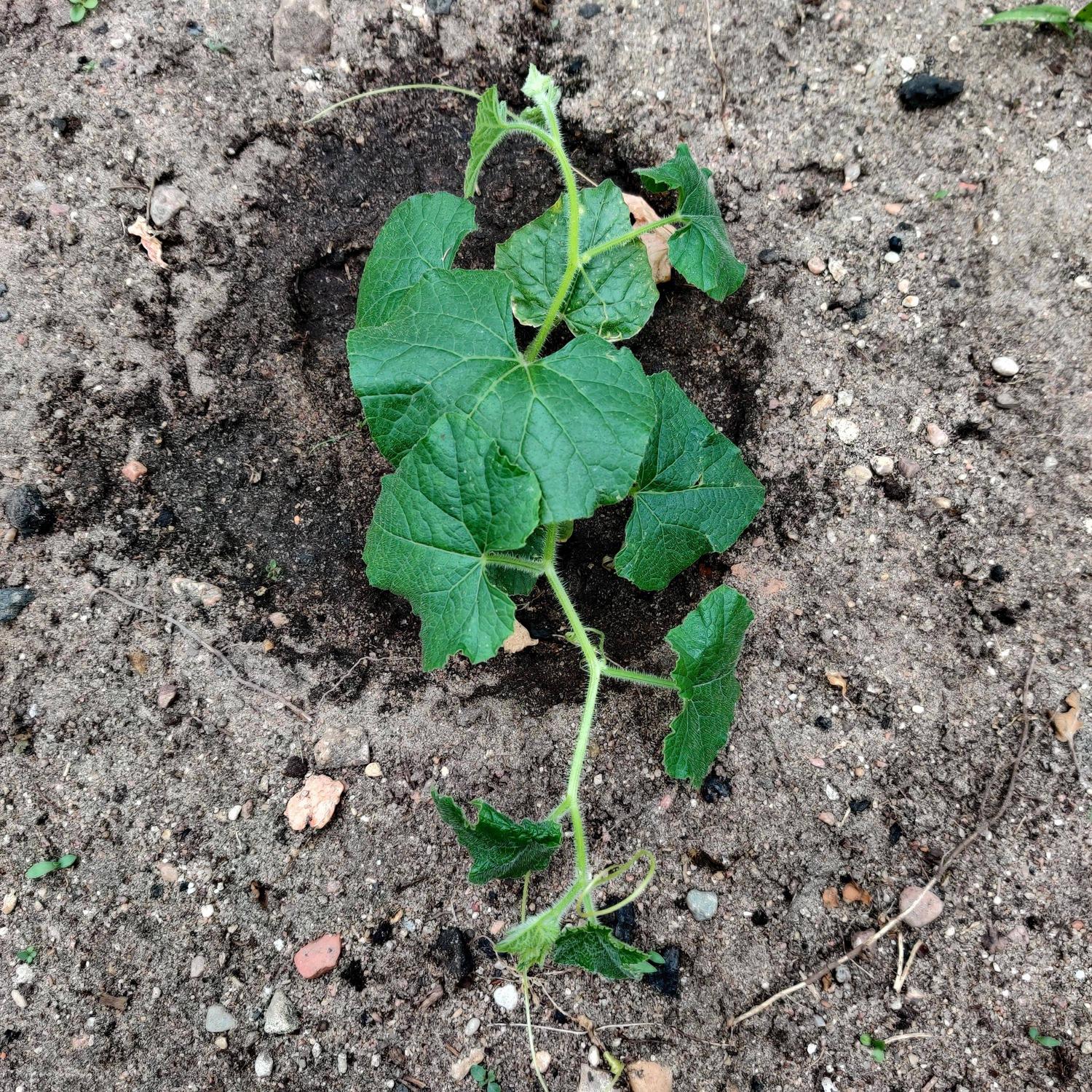 These plants certainly know how to grow, don't they?
With warmer weather and long daylight hours, I'm looking forward to seeing what mine is capable of. I probably have only one remaining viable plant now so am keeping my fingers crossed for it.
I's growing the same Outdoor border as my cucumber plants so hoping cross pollination action isn,t going to be an issue. I believe this can happen with winter squashes sometimes.
0 x
Top
Post Reply Previous topicNext topic
187 posts

Users browsing this forum: No registered users and 4 guests