I promised to keep updating about kiwano for this year, so here's the first post about kiwano!

Last year I started at about the same time, in february. It's a bit early for cucumbers and kiwanos right now but last year I noticed how this variety of kiwano (not sure which variety it is) took a while to set fruit. It really needs a very long season so it can only be grown in a frame like a glass greenhouse or inside of a poly tunnel. On my balcony last year they developed fine, but at the end of the year I had to cut off unripe fruits because I had no greenhouse. There was a large chance of autumn rotting away the beautiful fruits. It took untill december last year to ripen the fruits on the kitchen table. I'm starting them inside a propagator with a transparent lid on, positioned at the windowsill on the south side of the building (as always), together with some outdoor cucumbers and other cucumber varieties. I hope they will sprout soon, the kiwano seeds are more than one year old so there is a tiny chance of nothing coming up. Let's pray for the best of it! Gonna have to hurry up building the greenhouse now 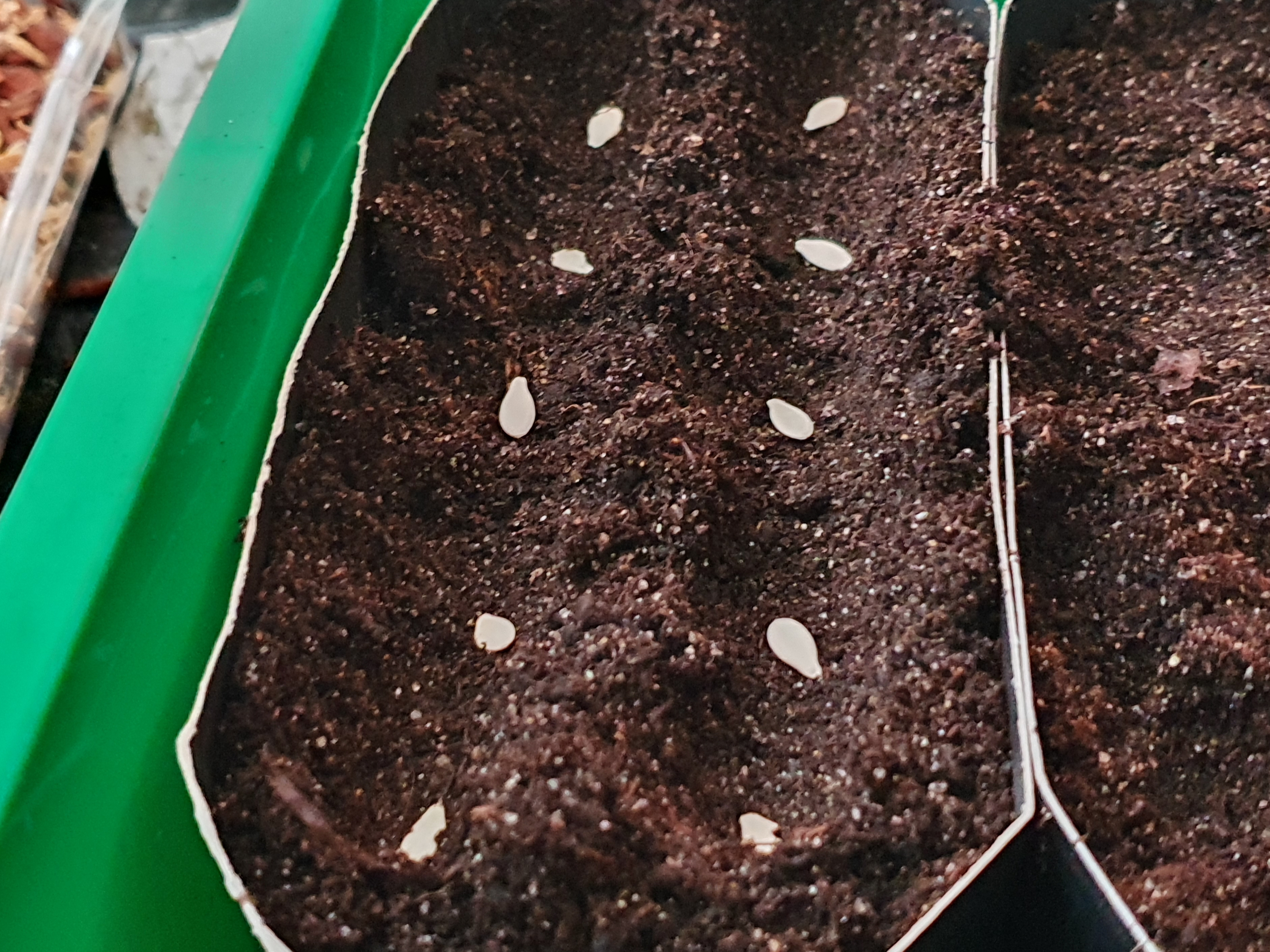 I've sown 10 seeds in two rows and covered the seeds with ⅓ to ½ inch layer of soil, it should be fine. It's important to keep them very warm, at least during the day, preferably above the heat radiator or carefully placed on a heat mat!

By the way, I used some thin cardboard boxes for sowing this time. The store had passion fruits in them.
Last edited by Elmigo on Sat Feb 22, 2020 1:34 pm, edited 1 time in total.
1 x
Top

Thank you for this timely update Elmigo.

I,ve sown a few of the seeds you kindly sent me. So far only one pot with three seedlings has germinated but they're on a windows sill in my lounge which gets pretty chilly at night once the curtains are drawn in front of them , leaving them on the wrong aide. I keep forgetting to move the pots!

They are destined for growing outdoors up trellis against a south- facing fence so raising any to the point where they bear ripe fruit is going to be my challenge this year.! 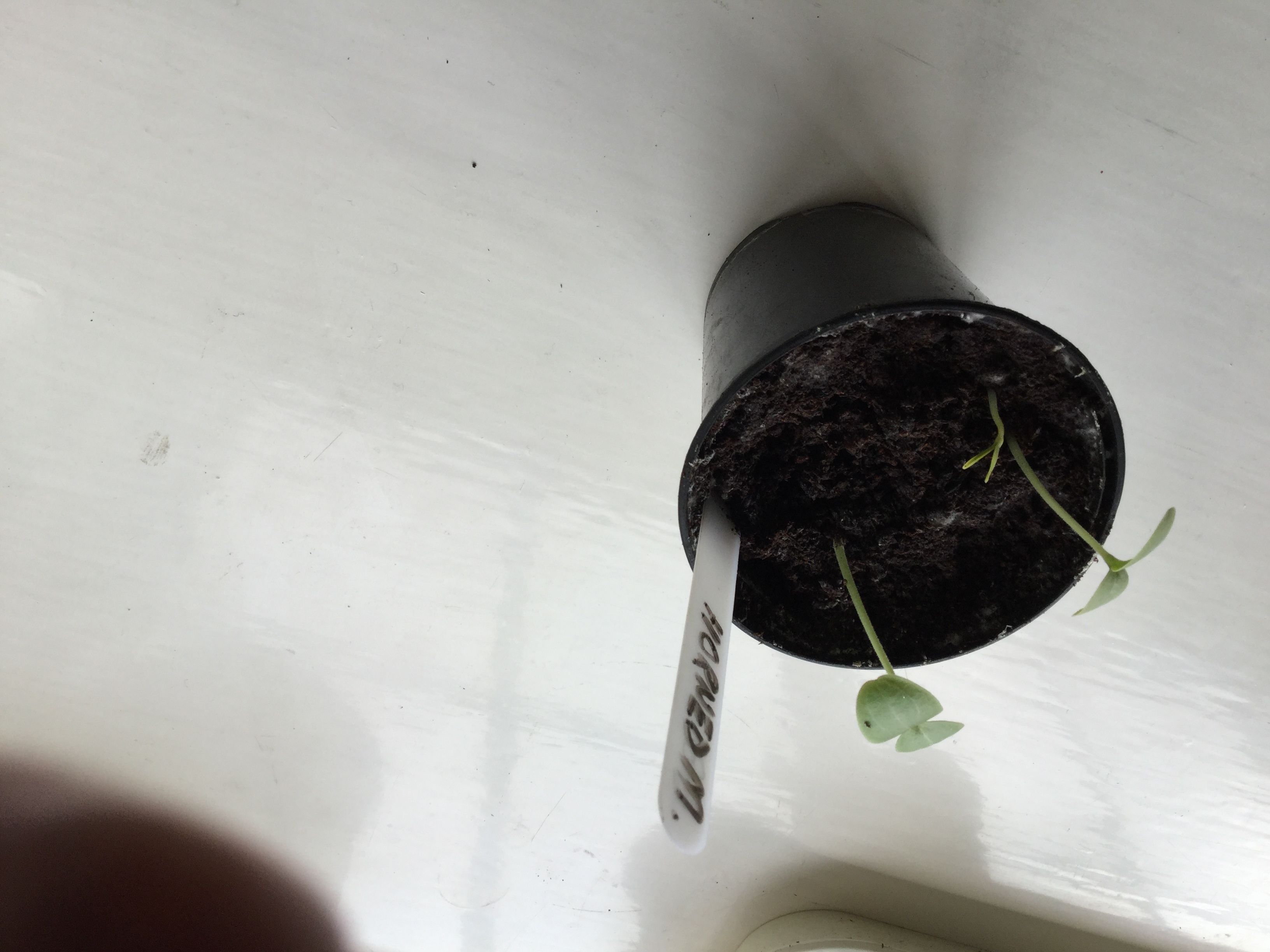 Don't worry about the low night temperatures. They need the warmth during daytime, but after all they grow in desert like areas. In deserts it can get quite chilly at night!

You're early, which I think is a great thing because they need a full long season

I'm very excited to see them sprouting for you already!! Please also keep updating about your progress, I love to see this. It looks like we're facing the same challenge regarding the outdoor growing up against a fence.
0 x
Top

At least there are no slugs indoors to eat my seedlings ! The temperature is between 18 - 21 degrees during the daytime. Just haven't mastered the art of always getting photos to appear the right way up !

I also sowed some pots of Italian pointy peppers about a week earlier than the Kiwanos but there is no sign of them germinating yet. They're also very slow germinators - They were home collected seed last autumn so I hope they're OK.
2 x
Top

Good Luck Elmigo & Primrose! Let's hope nature decides to give us a long warm summer so you can both get some fruit & in turn some fresh seeds for the future!

And yes Elmigo - you need to get started on the greenhouse, however if like here where we at least have not a named storm this weekend the wind factor has still been pretty impressive. The gusts are back tomorrow but only for a few hours in the morning. Might have to bide your time a bit but at least it will warm up quicker.
1 x
Westi
Top

Good thing you just reminded me about the Italian pointed peppers! I have some sweet red pointed ones in the fridge waiting for me. Going to save the seeds and give it a try!

Definitely have to wait with the greenhouse a bit longer as it's also starting to rain heavily and storm is building up again...
1 x
Top

Time for a tiny kiwano update

Within barely 4 days kiwano started showing its head above the ground that is slightly sandy seed starting mix. It looks very innocent right now but trust me, that little guy gets huge! Wow! I am impressed, really. Where did you get the seed? I don't know if you have mentioned that, so I am sorry if it shown up somewhere in here. Kiwano is something really unusual in my country. I don't know how it tastes but there are some of them appearing in some shops so I have to buy one and try on my own. I have to try growing it also!

Cookie - in which country are you living?. Horned melons are certainly not native to us here in the UK so my first effort this year will be very much an experiment.

Elmigo saved and dried the seed from a shop-purchased fruit in Holland and those seeds germinated so certainly worth a try! Always fun to experiment and expand your boundaries.

After all, many of the plants and fruits we grow now and think of as native to the UK were actually bought back by plant hunters from abroad a couple of centuries ago and over time have adapted to our own climate.

I don,t think we really able to grow oranges here yet though, (apart from in a conservatory of course,.....but if climate change continues to happen, who knows?
2 x
Top

And here we are Primrose, as modern day plant hunters trying to cultivate new species

I got all my kiwano seeds from store bought fruits. They are very expensive and rare, certainly not native to my country and they can only be grown at very high desert like temperatures. Likely indoors and when warm enough inside a greenhouse. The seeds can only be found at garden stores just sometimes. Not even every year. When they have some you pay €5 for just 10 seeds...
1 x
Top Good result so far Elmigo. Looks like you could be going Into business !
1 x
Top

Perhaps I might give some away, or sell a couple to fanatics who love to try this too. One plant is more than enough for my tiny greenhouse. It is very likely to outgrow all other plants too...
0 x
Top

Only three of the six seeds I planted have germinated. In view of your previous record Elmigo I think that will generate more than enough to dope with.
2 x
Top
Post Reply Previous topicNext topic
158 posts