Need to know the best time to plant?

I have had an issue with my toms for the last couple of years. They are planted in the Polly good bush plants over the first set of leaves.
In planting hole mixed well in I put FBB, aspirin, calcium, slow release fertiliser, and magnesium.

The plants have plenty of light but grow thin, with big gaps between leaves on thin stem, they are watered twice a week and grow into the ground in bottomless pots approx 10 inches in diameter.

Any ideas would be great please.
0 x
who needs the gym when you have an allotment
Top

I normally find if the first truss douse not set then I get thin stems ,maybe you are over fertilising them ,do you check how damp the soil is or just water
0 x
Top

Yes, it sounds to me that they are getting a bit too much food, especially nitrogen, which makes their stems grow fast and tall. If the planting medium is ok to start with, I only feed tomatoes when they are starting to set fruit and then with a low-nitrogen fertiliser.
2 x
Top

I usually only water twice a week, The roots go down and find the water then rather than constantly watering
0 x
who needs the gym when you have an allotment
Top

Depends if the roots can get down through the compacted soil though! It's been pretty dry & although humid in the tunnel the soil compacts, the humidity is in the air. Toms are greedy & the roots will go down, but they need that passage open & available! When little, the roots aren't strong enough - water more when little - twice a week is not enough & don't over feed as makes them lazy as well!
1 x
Westi
Top

Dear Tracie,
from what you have said this is a problem that started a couple of years ago. The tomatoes were fine before this? If this is so then it might be the polytunnel that is to blame. Or rather the plastic cover is. This is because as plastics degrade over time the light wavelengths they allow through them may change and this might be what is causing the problem you have. Can you remember when you got the polytunnel and how long the warranty was for the plastic? Many people are tempted to use a plastic polytunnel skin until it disintegrates; this can prove to be a false economy as yields can be down quite markedly in the years between the plastic warranty expiring and when it is actually replaced. Although having said all that a good wash might improve things no end as well!!

The variety of tomato called Shirley is noted for having short internode lengths, this may be a variety to try in the future.

I would also give the fish, blood and bone a miss next time; far too rich for baby tomato plants. I would also recommend that you use the slow release fertilizer recommended for roses as this has a lower nitrogen content than a general one has.

What is the benefit of Aspirin and how much is added to the growing medium?
0 x
Regards snooky

"What is the benefit of Aspirin"

It stops them getting a headache when they grow to tall and bang their head on top of tunnel. (sorry count resist)
4 x
Top

Have you been growing tomatoes in the same bed for several years? It is usually recommended you change the soil every few years.
You say you feed into the planting hole, this seems a little odd rather than preparing the whole bed.
As others have said, your feeding regime also seems a little odd. I have no idea what the aspirin is doing, tomatoes prefer a slightly acid soil so adding calcium won't be helping, FBB plus slow release may be too high in nitrogen, I've never heard of adding magnesium as part of soil preparation.
I'll tell you what I do that seems to work. My polytunnel has five equal beds and two of them are tomatoes each year, I don't change the soil but I do rotate them. I'm afraid my measurements are imperial. My beds are 10' x 4'. To stop them overflowing their edging when I am preparing them I dig out a first trench of about a barrow load of soil (I use it as a basis for potting compost for bedding plants etc.) and then add about 2½ barrow loads of garden compost to each bed. I then feed with 15ozs FBB, 5ozs potash and 5ozs phosphate so they have plenty of food but not too much nitrogen. A day or so before planting I flood water the bed to be sure there is a good deep moisture reservoir. Each bed gets 10 plants. I water daily but don't liquid feed until much later in the season, usually after I am picking the first truss, that is when magnesium is used as part of a tomato feed.
Hope that helps.
2 x
My Weather
Top

Thank you everybody for your responses.

In preparation for next year I think I will dig out the bed as much as possible, replace the soil with soil from my allotment.

Plant the tomatoes a bit shallower, and not put anything in the planting hole at all, then wish for a better result.
1 x
who needs the gym when you have an allotment
Top

I water on a regular basis, not doing so usually results in growth spurts and split skins, so I water daily and once the fruit is set I then feed twice a week on most plants, those with a greater crop are fed every other day.
These are "British Breakfast" know for very large trusses of fruit and fed more often than the smaller fruited varieties like Gardeners Delight. 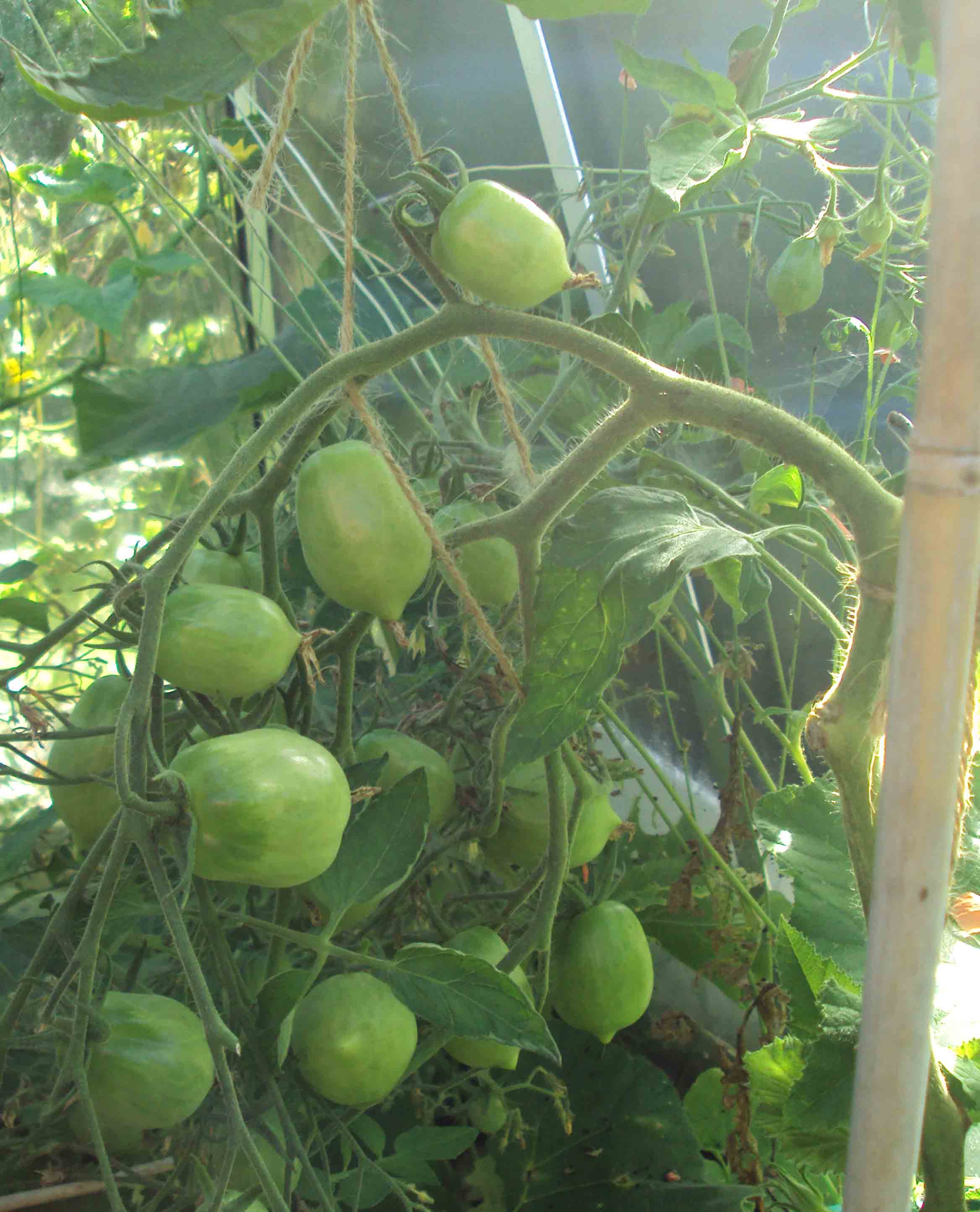 1 x
Been gardening for over 60 years and still learning.
Top

This really happens from an excess of fertilizers and moisture. Tomatoes grow stems and leaves, but they bloom less and give less yield. Again, watering 2 times a week with how much water? Possibly excess water.
0 x
Top
Post Reply Previous topicNext topic
12 posts • Page 1 of 1