Just been clearing out veg from my bed that has bolted or not doing anything. Went to clear my carrots out and seen these. Anyone any idea what they are? I was going to pull & bin the carrots as just not grown due to over crowding with other stuff 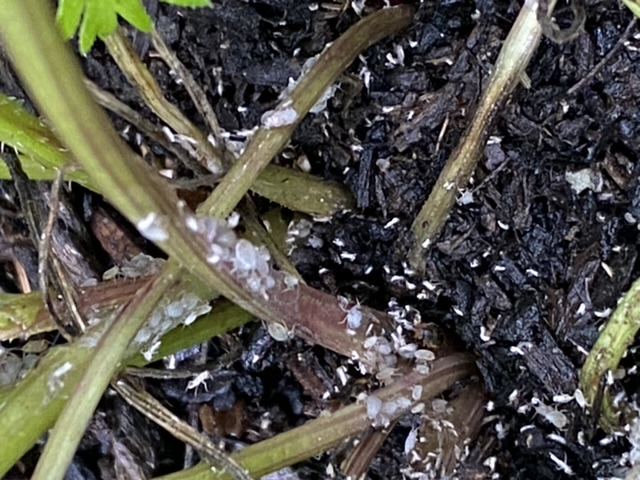 They look a little pale but they could be willow-carrot aphid; they are the right shape for those. Photographs do sometimes wash out the colour from translucent items; but they should be a pale green. Not a lot to do but if there is a willow tree nearby you might want to remove it.......
Regards Sally Wright.
0 x
Top

They are white rather then pale green, but that could be due to my sight

In regards to willow trees, there are none by where my raised be is. My worry is that this is where I'm planning on doing most of my carrots next year. Any advise on how to prevent them? This year I'm just going to bin this crop as not worked due to over crowding.
0 x
Top

I would reconsider where you do your carrots next year. I note your soil looks very dark - have you improved it? Carrots like sandy free draining soil & if that soil is enriched you may have imported the little nuisances from that & they may have mated & you will get a repeat performance next year. I grow (now, after several big fails) in potato growing sacks filled with a mix of sand with my sifted compost! The sacks are from one of those £ shop places & I inherited them but that makes them 3years old & only a bit of deterioration on the folded down edges from when they used them for spuds. Not bad for about £10 I think for 3 sacks to last this long & I might - will - squeeze another crop out of them next year - just a wee top up of my sifted compost mixed in throughly to stir up the compacted soil already in there & amaze myself by getting a carrot that wasn't rude!
0 x
Westi
Top

The raised bed is new this year, and I’ve not enriched the soil. Soil maybe dark due to being wet at the time, had a bit of rain recently. So you think that soil is buggered now for the likes of carrots etc now?
0 x
Top

I wouldn't say it was buggered for future growing but until you can positively id what they are, there is a risk they could come back. There are so many of them & no natural predator has moved in to help you clear them unfortunately. What are the actual carrots like, have you pulled one to see what it's like? Maybe they just like the tops & so long as they don't show up too early you could get a decent crop, but could hedge your bets & sow a few in a box or potato growing sack to hedge your bets?
0 x
Westi
Top

I’ve pulled all the carrots up now, were not growing anyway due to other issues. They looked ok, all bet it too small. Thing they have not grown well as there are courgettes growing in the layer above. My bed is 4”X6”. But double layered so that the first 2” is 2” in depth, and the second 2” is 4” in depth (or there abouts).

I need to start thinking what to plant in it next year to get a decent yield, as what I’ve put in this year is too much / too bit for it.
0 x
Top

It is a small bed to support 2 crops when one is as greedy as a courgette! As this bed is raised & easier to protect think about what you really want in summer & winter. If like me in Summer it is lettuce for the salad base so room for cut & come & 'proper type lettuce' & keen on Kale for winter Salads, sides, soup or crispy, so would grow dwarf varieties that could start off in the same bed as you take a lettuce! It is reassuring that the actual carrots are fine even if small! Have you got any other space btw?
0 x
Westi
Top

Not got much space, started with my VegTrug that I’ve been growing carrots, onions, spring onions & radish in mainly.

My raised bed is new this year And a few containers Tanzy that is a fab start in a limited space, you will have challenges because of the limitations of your environment but looks like you have mastered your space! Whether loads of space or small spaces there are always challenges - I consider them not challenges but learning & the first lesson is some years things do good & the next they don't - but you will always get a crop of something to cheer you up! You have got the bug, get you name on the waiting list of your nearest allotment as the children will love it. Yep I know there will be a wait but just time to continue learning - will be a different when you get a plot but you will have the basics mastered.
0 x
Westi
Top

Oh no, not mastered my space. Too much in raised bed this year, but is my first year with it Got my name down for an allotment, 3 year waiting list
0 x
Top

Hi Tanzy good start... have you checked out "square foot gardening" also veg in one bed by Huw Richards square foot should be availble in libray not sue about other one. Try ebay as well for good prices.
0 x
Top

Colin2016 wrote:Hi Tanzy good start... have you checked out "square foot gardening" also veg in one bed by Huw Richards square foot should be availble in libray not sue about other one. Try ebay as well for good prices.

There are a lot of “square foot gardening” books, any particular one you were thinking of?

Fingers crossed Tanzy the committee of that site actually follows up every now & then with those on the list. My lottie neighbour (on committee), told me they had 169 or something on the list, but were getting so many enquiries due to C19 & a bit of time so they rang everyone up. Some had actually left the area, some have even died & others either mastered their small patch or made friends with neighbours with more land than them, I believe the list is now about 50 & they have even set a bit of a questionnaire to weed out the unrealistic. One has slipped through though that even thought going into the plot with a mini digger was cool. That is it to date - 6 months later nothing else but but lots of bad weeds multiplying & growing to the annoyance of the neighbours! I believe he has been given notice to grow or give up - another mini digger maybe?

Just a question to ask when you enquire about where you are on the list? A time frame of 3yrs means nothing if they haven't reviewed the list or if lucky to get good growers could go up longer. Got to show interest & make contact as well as that could make a difference to your wait time. Fingers crossed!
0 x
Westi
Top

It’s a council list and apparently there are currently 280 on it when they replied. I will prob give it to next year & then maybe enquire about it again.
0 x
Top
Post Reply Previous topicNext topic
19 posts