I've never tried to grow slips so quickly after season ends. I'm waiting until fitst small shoots appear on tubers. That's always at the spring time, February or March. So there's no need to grow them indoors for long time. As soon as first shoots appear on tubers, I move them to light place and put to glass water as described, to let them grow, when they reach 20-25 cm long it's time to remove slips from tubers

Bunch of roots from old tuber... is that mean good crop... well not really. I was in hope it is, but apparently, it's not. Old tuber will produce huge amount of leaves and very small child tubers, because the plant will invest in old tuber instead of creating new ones. You can move old tuber to pot with soil (if not decayed) after removing slips (keep smallest one). After all, choice is to trash it or get (small) crop from it.

Don't expect too much from old tuber though, despite roots looks impressive, as well as mass of leaves when planted. But I've heard leaves are good to eat as spinach substitute (but I've never tried it), so another small benefit from old tuber may be there.

Btw, if you are starting so early, I think it may be better to grow slips in soil, not water. It takes longer to create slips, but there's no risk tuber will rot, so you can probably get even more slips from it. I put to water, because I wanted to get slips as quickly as possible, in your case there is no need to hurry, unless you have growing season now
0 x
Top

Thank you giaur. The only reason I have started early is the tuber had started growing slips. It was my very last from my 2019 crop just in the kitchen veg basket thing in the kitchen getting no special treatment. It is a largish tuber but not huge. It only had 2 slips which are now 6cms long but has another 6 showing.

It is really just an experiment as it was telling me if was ready to try to grow so I figured I have the warmth & the grow lights if needed (well it can stand near the lights to benefit but not take up the propagator space). Then if the weather is kind early spring it will get a good head start - well if it survives! I shall put it in a pot though. I am never over optimistic with them but like a little project/challenge! It took 3 years for my edible passionfruit experiment to do anything including germinating, but I have 2 small plants that survived under the sweet pea arch this year from a direct sowing, so they are tucked up & will possibly be potted up & moved into the tunnel, but will need to research if they will tolerate this & then of course will the fruit ripen if they ever get that far? My peanut experiment is ongoing, can grow them & get a crop but they are really moist & go mouldy in a blink - work in progress so to say.
0 x
Westi
Top

As you are located in UK, you are probably never getting winter frosts. That makes a lot of things easier, especially if you also own tunnel. I am experiencing even -10 or -15 frost sometimes - even greenhouse or tunnel is useless when outdoor temperature is so low. From my experience, sweet potato slips don't grow well indoors, main problem is oedema: https://www.missouribotanicalgarden.org ... edema.aspx however, it's possible to overwinter them, usually 1 of 5 survives. Tunnel/greenhouse + lights when no frost outside may be better though.
0 x
Top 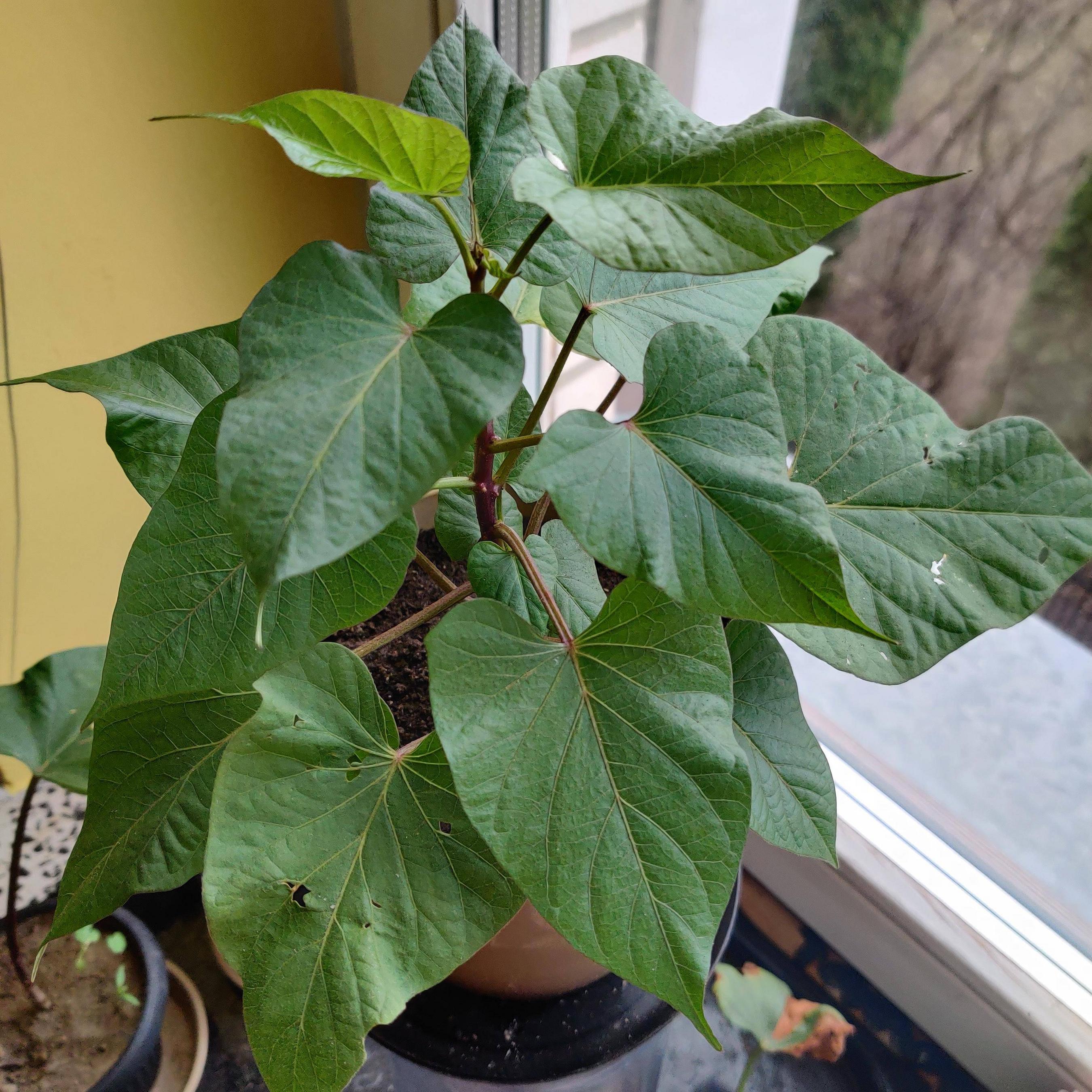 How do you think, any chance it's going to survive winter indoors? 10 are dead, this one has decided to grow. That's my last one.
0 x
Top

Looks sturdy to me, but early days until spring so fingers crossed. I haven't potted mine yet but that is for my day off Tuesday. I have to sacrifice the two first slips as they have gone bonkers & all thin & leggy, The new ones are much chunkier so will see. Since you have posted - what about humidity for these guys growing inside? I don't have central heating but it is still a dry warmth, do they need a wee container of water nearby to assist?
0 x
Westi
Top

Current humidity is 35%. You should not care about low humidity in my opinion. Worst things are lack of daylight and lack of wind or draft. All of it causes inability to dispose water by leaves. Especially, young small plants are affected by oedema and all leaves die eventually. I think that's because small amount of leaves and big amount of roots, so much water taken from soil, but no leaves that are able dispose it. Low humidity, drafts and low watering recommended.

When it grows outdoors, direct sunlight and wind will help to dispose water, which may be hampered when growing indoors
0 x
Top

Cool! Low humidity I've got, sunlight at times & always drafts opening & closing the door for the critters. I think I am going to enjoy this wee experiment.

Thanks as always!
0 x
Westi
Top

Hard to say. Sweet potato definitely does not like to stay indoors. All of above is more my guess why, there may be more factors. The fact is, some plants are able to grow indoors just fine, some others, not. Sweet potato is rather second group. You can't grow it as home plant, you can only try to keep it barely alive to spring.

You should not expect all your slips are going to grow, rather expect 1 of 5.
1 x
Top

If it grows just fine there, it is suitable for all temperate zones. Canada is not warm country
0 x
Top

Alive but not happy! But my fault as they live at home & loads to do on the plot & I have neglected them. The very early long slips have succumbed but I do have new slips as well. They will be going into the tunnel but it gets colder in there just lately than then they like but warmer than the greenhouse. I'm not optimistic tbh. But Canada deffo gets gets colder. Thanks for the link!
0 x
Westi
Top

Link is nice, but it does not say anything where to buy Canadian variety. Btw regarding to cold, -20 tomorrow expected here

And, other small guy: 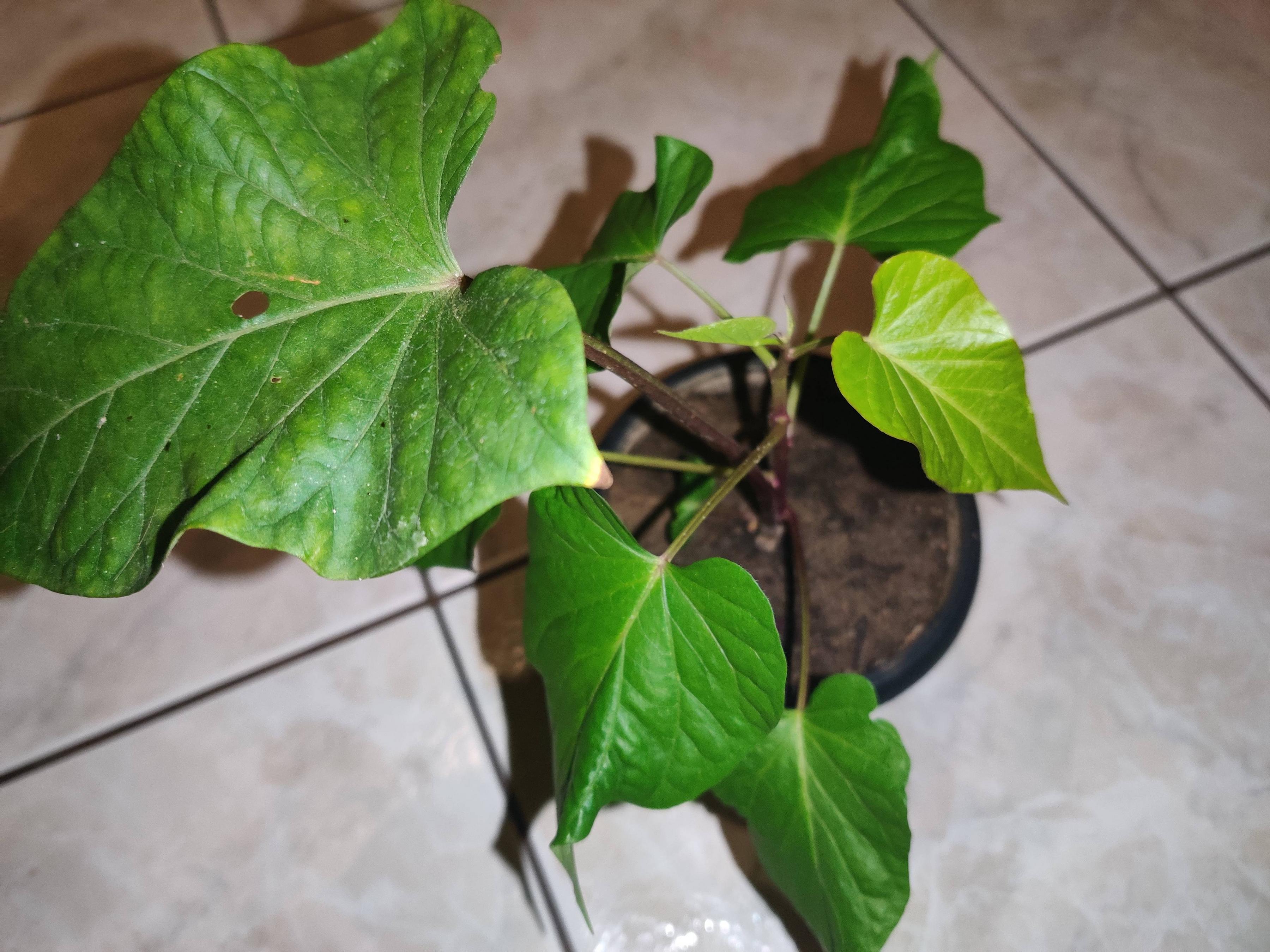 Both of them grow since November, rooted from old plant's green. 10 died, one barely alive, remaining 2 are healthy
1 x
Top

It's time to another experiment. Some people recommend to try wit soil, this way: 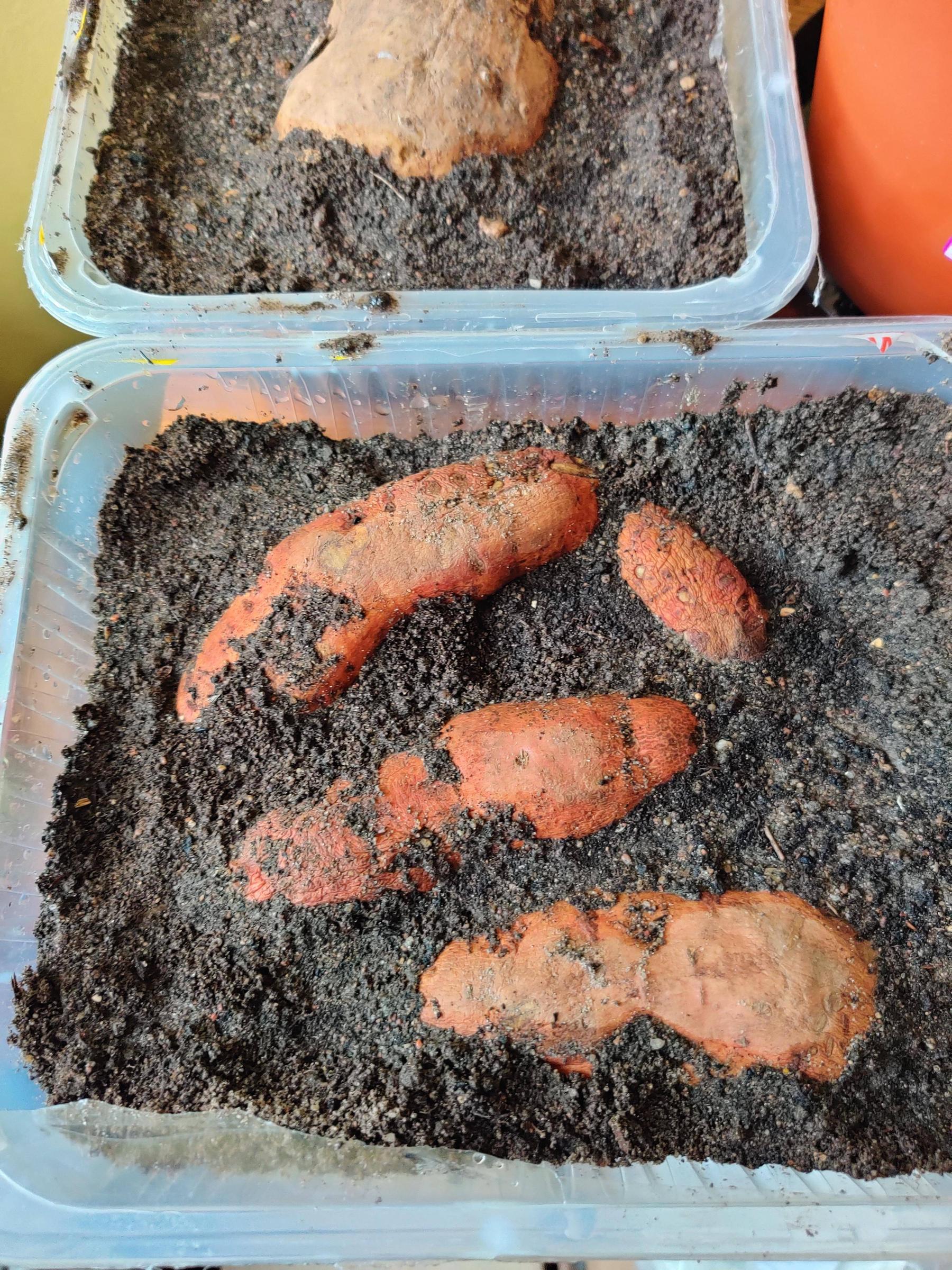 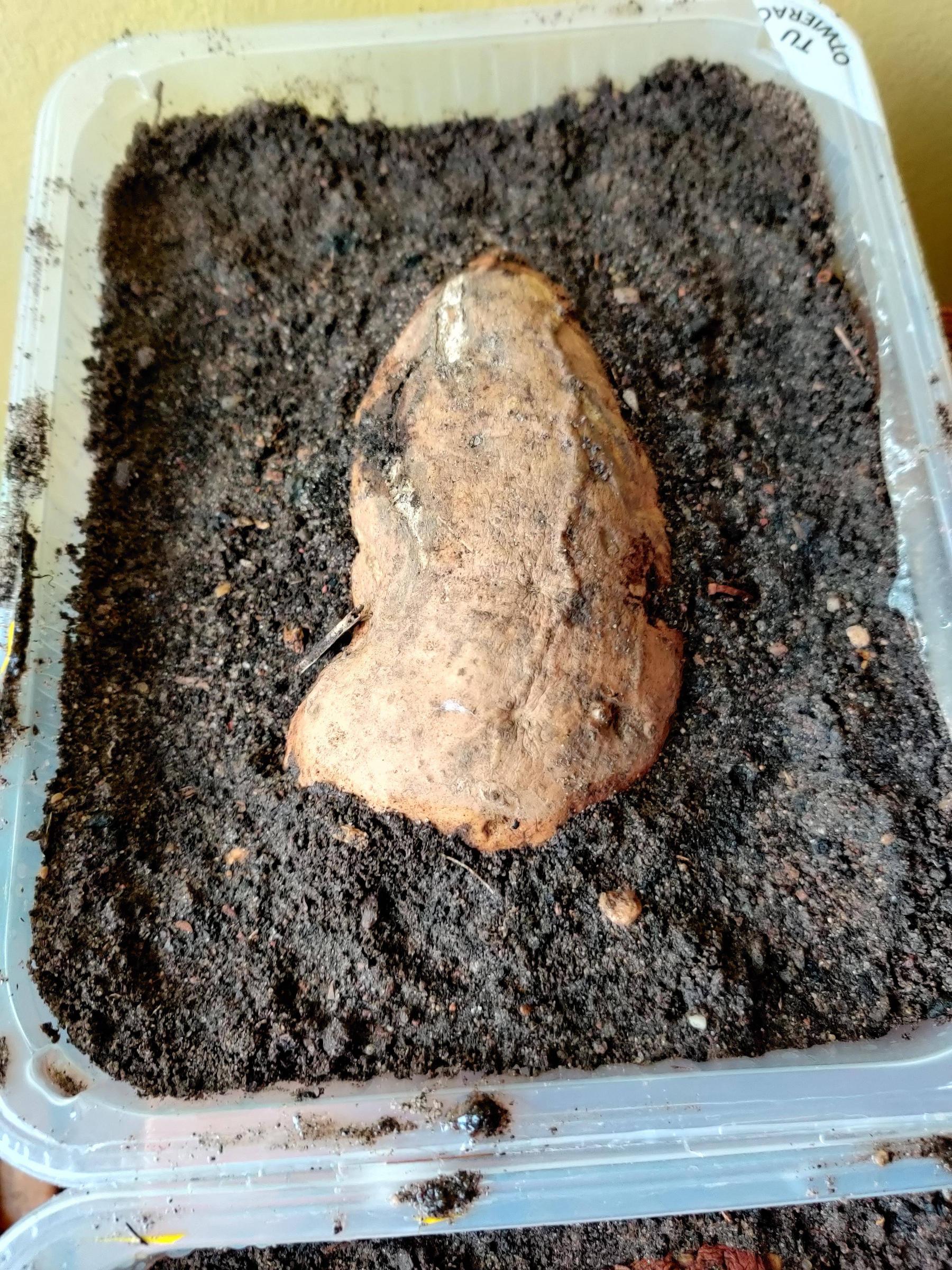 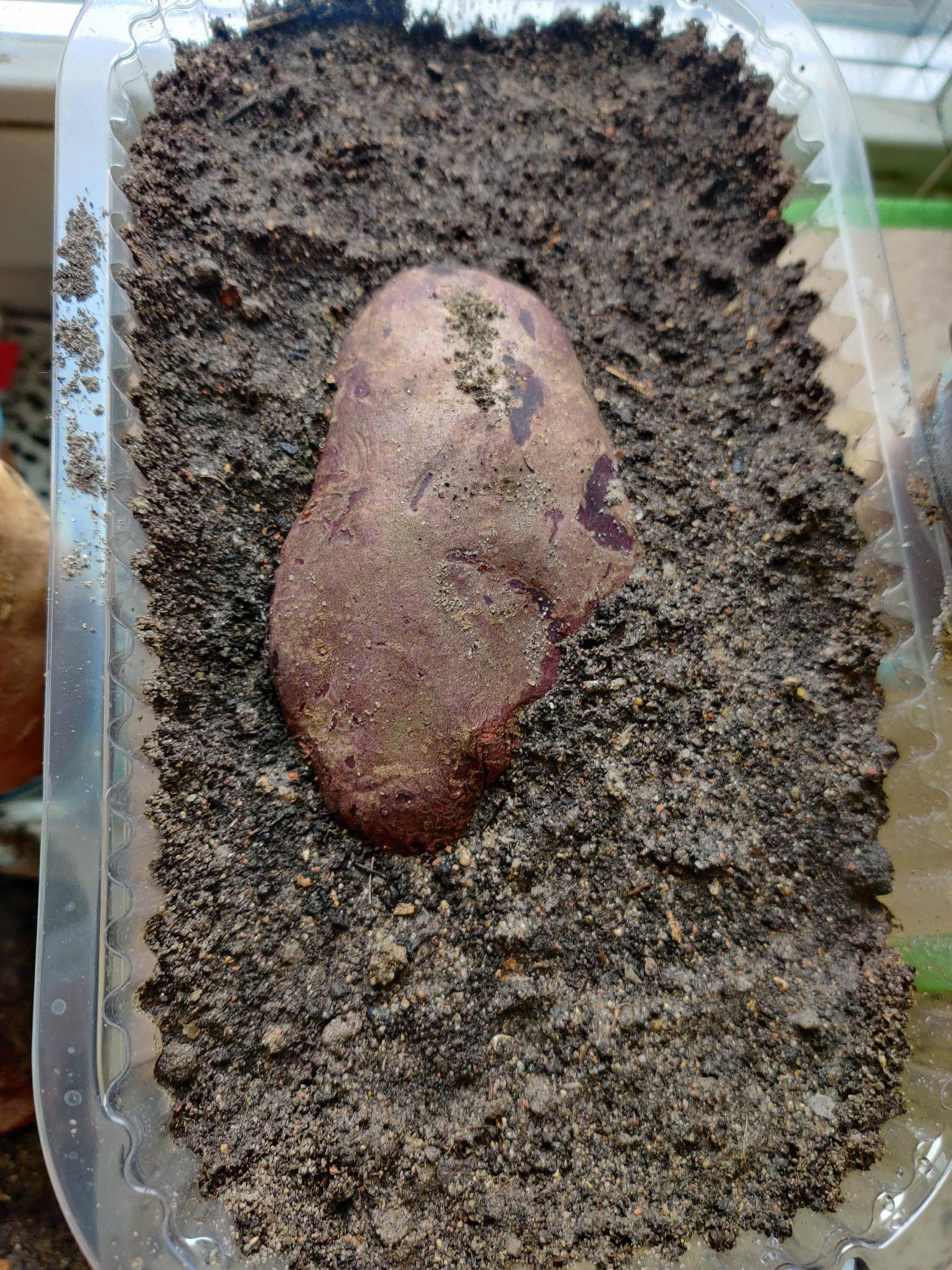 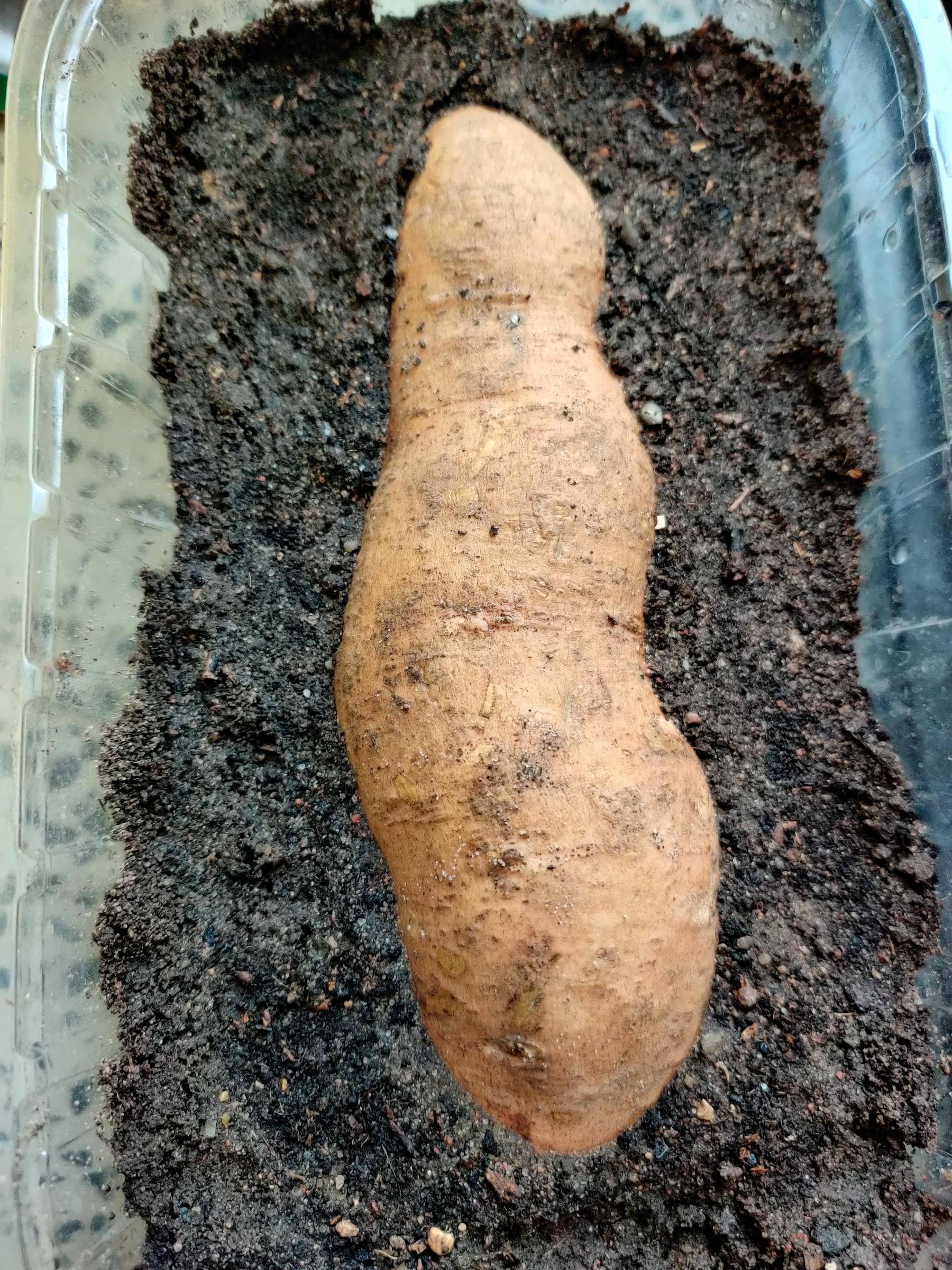 January 23th today, they say it should take not less than one month until first shoots arrive and not less than 2 months to get first slips. We'll see how it works. That's my own tubers, pure organic, not cured in any manner so they must eventually sprout

Some people even say it's better to do that in soil: https://youtu.be/nthlM1nsInA
0 x
Top

As expected my little experiment with trying to save the early slips that popped up on the sweet potato failed, which I must take full responsibility for as not vigilant enough. Anyway I had a look & a few little dots could be potential future slips are showing but thought unlikely, so went to compost it to find a big & healthy root growth. Now roots are still very fine but a nice bundle of them. I have replanted & moved it inside & plan to take it to the tunnel in the pot when a little warmer at night. (Some huge variations from min -3.2 to max 29.2 yesterday).

But is it worth doing? I have no knowledge on the root growth whether just a reaction to stress & won't bring on slips as they take more energy & saving itself type of thing with no future or a good sign? Your advice would be appreciated as always.
0 x
Westi
Top
Post Reply Previous topicNext topic
117 posts