I bought this Blueberry bush approximately two years ago from B&Q in the UK. It has doubled in size since purchased so it's growing, albeit slowly. I bought it at the end of the season because I liked what I assumed was it's Autumn colours.

The problem is it's always the same colour regardless of the season. Occasionally some of the leaves start to turn green and then go back to the Autumn browns and reds. Growth is slow and it has not flowered yet.

The first year I had it. I plonked it in the garden which is heavy clay soil. After that I did some research and realised that was wrong. So I dug it up and popped it in a container with standard multi-purpose compost (all I had at the time) with a handful of ericaecious feed.

I think it's probably a nutrient deficiency? But as it's growing and looks healthy(?) to my novice eye, I was wondering if it's a different variety that always has these colours. Or maybe it's not even a Blueberry.

I have bought some Ericacious potting mix. Should I re-pot it with this.

I want to try and rescue it as it seems determined to grow. Any help or advice would be greatly received. 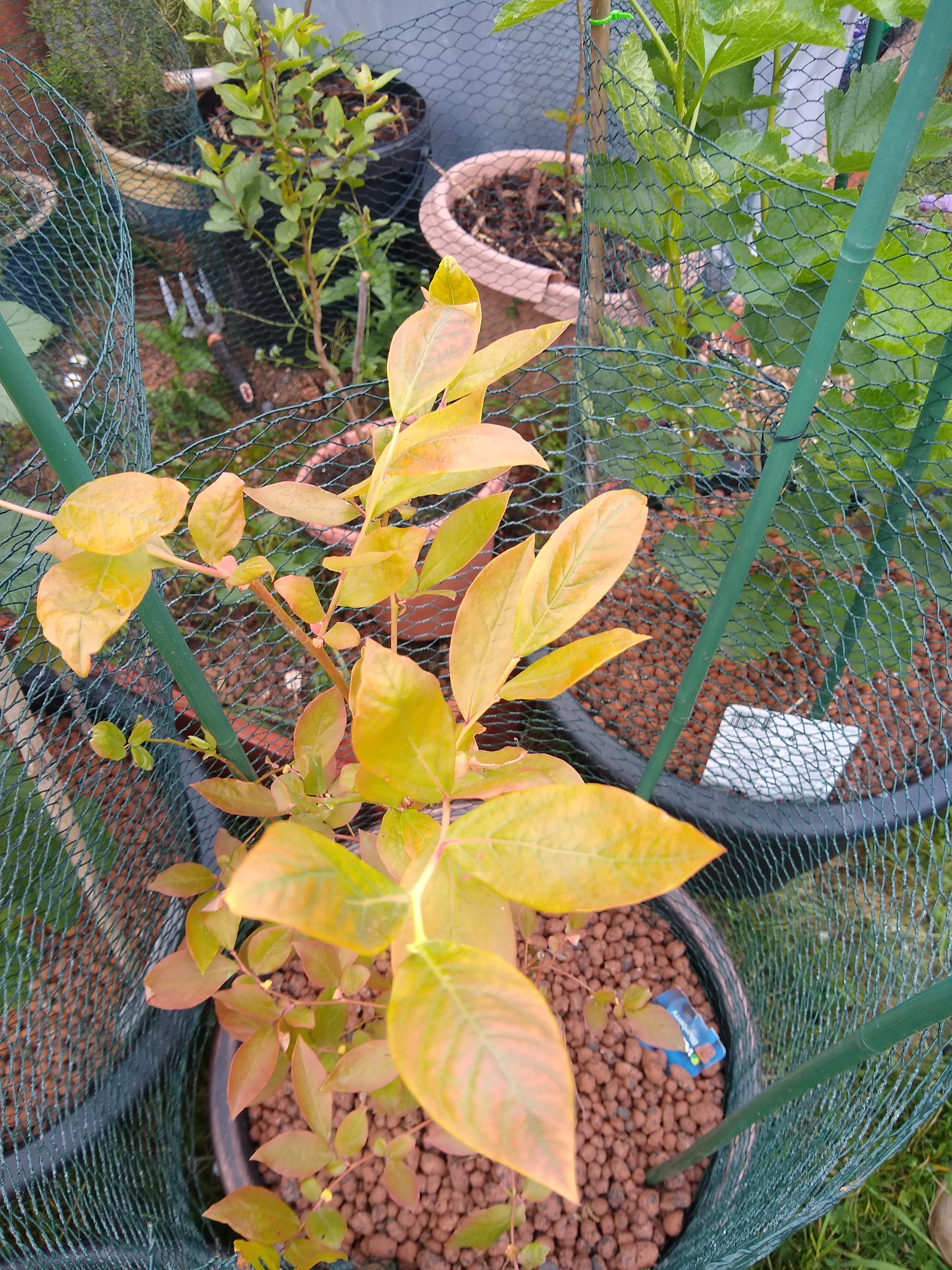 Blueberries are a little bit different from blackberries, gooseberries, raspberries etc. because they like slightly acidic soil. Definitely use peat for potting, add some pine needles or pine forest compost, anything that makes the soil a little more acidic. If the soil is too subjacent it may not even grow. I placed my blueberry in peat soil mix.
1 x
Top

I wish I could help you but my only attempt at growing a blueberry bush failed after 18 months when it finally died on mex after losing more and more levels. I suspect it didnt t like the soil mix. The. urseries always seem to suggest these are easy and prolific fruits to grow but my experience of talking with people who attempted to grow them that this is very much not the case.

Yes, your plant looks quite leafy still as if it wants to grow so hope you get a more helpful comment from somebody who has succeeded in growing them successfully.
1 x
Top

I would repot it using ericaecious compost
1 x
Top

Thank you for the replies.

The rain has just stopped. So I'm going to re-pot it in some ericaecious compost. The one I have says it contains peat.
Elmigo, Thank you for the tip about Pine needle compost. I can't get it at B&Q so I'll investigate local nurseries.

Dear MFP,
Re-potting at this time of year will not do the bush any good; what you need to do is add something to the soil make it more acid (ph 6.5 or below). There are three kinds to choose from; sulphur, aluminium sulphate and ferrous sulphate. I would recommend ferrous sulphate if possible followed by sulphur but try not to use aluminium sulphate as is not really suitable for food bearing plants (IMHO). Follow the instructions on the packet.

When watering make sure to use rainwater to avoid adding more lime to the soil.

The shrub may take a couple of seasons to come round as that is as good a case of lime induced chlorosis as I have seen for some time.

Hi Sally
Thank you for the advice I now have a name for the problem.
I have a couple more questions. If that's ok.

Do you think it would be a bad idea to remove as much of the old compost as I can without disturbing the roots, and replace it with ericaecious compost?

Should I use ericaecious compost and ferrous sulphate together, or is that going to be too much?

Many thanks
Minty
0 x
Top

Dear MFP,
leave the soil alone whilst the bush is in growth and re-pot in October; use a slightly larger pot if you have one as well. If you disturb the roots now before the heat of summer (if we have one) will stress the bush further and that is not good. The blueberry will not like "instant fix" trust me. I should have said earlier the older leaves may remain sickly looking - this is normal - what you are looking for is green new growth. Do not fertilize the blueberry with standard fertilizers either, look for one that does not contain lime (Calcium).
Regards Sally Wright.
1 x
Top
Post Reply Previous topicNext topic
8 posts • Page 1 of 1