If you've found the information on the seed packet to be sadly lacking, this is the place to find out more, or add your comments!

Hi Everyone
I have summer fruiting raspberry's a new plant in summer of this year therefore no fruit this year.

I think I am right in pruning after fruiting, as I have had no fruit should I prune to the ground?

Do this also apply to tayberry, loganberry, and blackberry?

If I am reading this correctly PRUNE NOTHING!
Summer fruiting raspberries fruit on the previous year's shoots so what grew fresh in 2019 will fruit in 2020. At the end of fruiting in mid-Summer you will have two sets of canes, fresh ones that are still growing and old ones that have fruited, cut out the old ones and eventually tie the new ones in to some sort of wire support. As well as supporting them this also makes it easy to tell the old from the new at pruning time.
The tay, logan and blackberries are treated the same as the raspberries but can be a bit more fiddly to look after. If these were freshly planted this year tie in all the shoots to a wire frame. Traditionally you would run them in curves as it is supposed to help them fruit better. The difficulty is keeping the new growths out of the way of the fruiting shoots in the second year. Loganberry shoots in particular are quite easy to damage and need some support while they are still growing before you do the full training. If you have space a good way is to train all the shoots to the left one year and to the right the next or you can do it like the image below, bunch the new growth upright in the middle of the fruiting growth. Again remove all the shoots that had fruit and tie in the new shoots in late Summer. 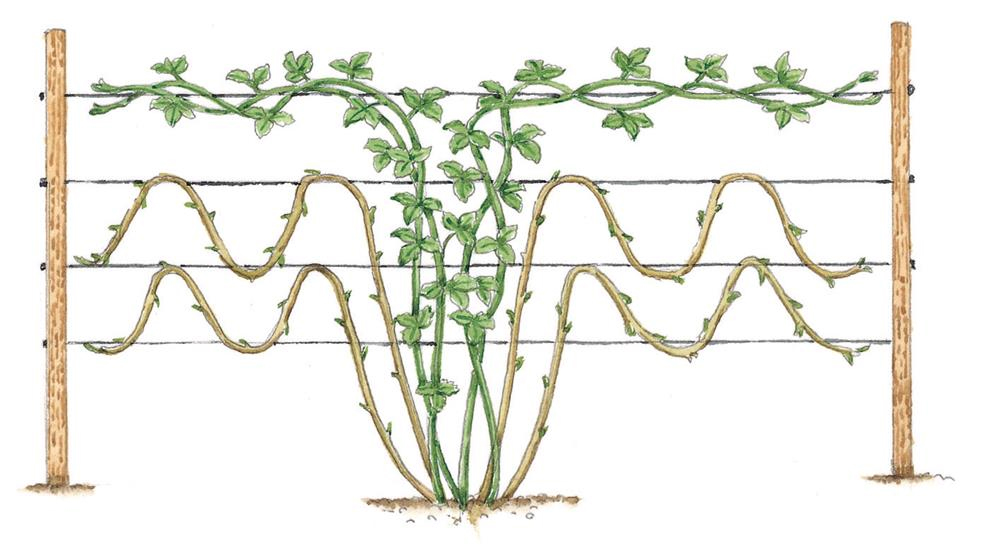 I think with raspberries it is still the summer ones that are cut down when fruited or in your case just grown, but before the winter proper, but I think it is more important with the autumn ones to leave them until after Xmas so they don't waste energy growing the odd fruit in the summer at the expense of a good autumn crop. As they creep into other beds I have accidentally cut them down with the summer ones & as excited I was to have the fruit (my winter raspberry is a golden), it was smaller & not as tasty. Blackberries are hardy so cut the spent brown stems down & you will find you already have new green long stems ready to tie in for next years crop.

I'm planning to paint the shed which I have tied the blackberry to, but have I have longish new stems already, which I will have to not only take off the frame but I will have to peg down as the weather down here is saying wind, wind & more wind & don't want them to snap. No idea of the variety but it is thornless & a gift from the birds.
0 x
Westi
Top

Thanks for your Geoff & Westi. I find it confusing with Autumn and Winter Raspberry's, your explanation help a lot