If you've found the information on the seed packet to be sadly lacking, this is the place to find out more, or add your comments!

I mentioned on here some time ago that I bought 12 Centenary Strawberries, they were delivered October 2013.
I potted up half of them and kept them outside for the Winter then put them in the heated greenhouse when I started it up and eventually moved them to the polytunnel where they cropped reasonably well.
The other six I planted outside in a row with some Symphony runners that I had rooted myself and planted somewhat earlier. These have never amounted to anything, here is what they are like now almost a year and nine months on, with some of the Symphony. These and the ones in the polytunnel did produce some runners which I rooted. 12 of these I potted up and again grew outside, then heated greenhouse, then polytunnel and they have cropped well (I posted a photo of them a bit ago). The rest I planted in a row outside again alongside rooted Symphony runners. These are rubbish like the originals as you can see. 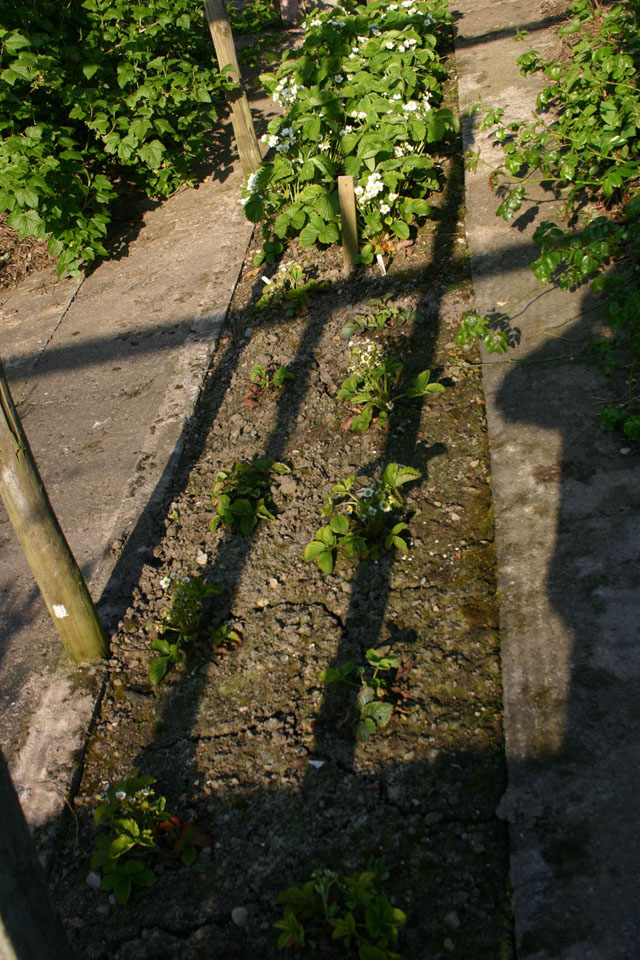 This week I emailed East Malling Research (who developed Centenary) about my problems with them and got this response:

Your problems are certainly not due to a virus, as D T Brown would have you supplied you with certified stock and these plants would thus have been free from viruses and fungal diseases. Since the plants performed satisfactorily in pots but not in the soil, it seems likely that the problems were caused by a soil-borne disease to which Centenary is susceptible but Symphony is resistant. There are two possibilities, red core or Verticillium wilt. Red core disease is specific to strawberries so this could only be the cause if you planted into land previously used to grow strawberries, it is more likely to occur on heavy or poorly drained soils. Verticillium wilt is more common as it has many alternative hosts including potatoes and many weed species, it is more usually a problem on light or sandy soils.

The variety Symphony has some resistance to both these diseases but unfortunately the majority of varieties, including Malling Centenary, as susceptible. If you can work out which disease is most likely to be the problem in your case then I will be happy to recommend some alternative varieties that would be more likely to perform well for you.

As I wrote the email I decided that a soil based disease was the most likely problem. I do gamble a little with my Strawberries. In the fruit cage I have four beds that I use for them; first year, second year, third year and “fallow”. The resting bed I deep dig and add plenty of organic matter then grow Early Peas; when these are cleared it is dug again and prepared for the return of Strawberries with more compost, FBB and Potash as fertiliser. This means it is only rested from Strawberries for 12 months and I guess I am only getting away with it because of the resilience of Symphony. The original six Centenary that I forced were planted in a different patch and, while not being as good as the Symphony, they have grown better.

Symphony performs very well for us and the only thought behind growing Centenary was to extend the season. I think I shall just root enough Centenary runners to give me twelve pots for the polytunnel and stick with Symphony for the main crop.

Deciding which disease it is likely to be from soil conditions is difficult. My soil is basically fairly light but can still get very wet as we have something like seventy inches of rainfall. We have abandoned Summer Raspberries as we suffer from Phytophthora Root Rot (any news of a tasty resistant variety yet?) which is why we are growing quite a lot of Strawberries.


Which got a second response:

Raspberry root rot is closely related to red core, both are Phytophthora diseases that like wet conditions. So, as you say, it is difficult to pin down the most likely problem with your strawberries. A few modern varieties are resistant to Verticillium wilt but I can’t think of any that are resistant to wilt and red core. 95% of UK commercial strawberry production is now in poly tunnels, so very wet soils are not a problem and if the growers have soil-borne diseases they usually come out of the soil and grow in bags on ‘table tops’. Consequently most modern varieties are bred for growing under protection and, although some have disease resistance, they lack the vigour of Symphony and may not be robust enough outdoors in your environment. If you do decide to grow something other than Symphony outdoors then I suggest you go for some old varieties like Cambridge Favourite, Redgauntlet and Pegasus, which have good all round resistance to soil-borne diseases.

I don’t work with raspberries and my colleagues at East Malling are focussing on autumn-fruiting types, rather than summer-fruiting. The James Hutton Institute at Dundee is breeding for resistance to root rot but I don’t think they have yet released a resistant variety that is available to the amateur market. It would be worth checking their website from time to time though.


So the moral of the story and the warning to anybody thinking of growing Strawberries is that modern varieties are bred for modern commercial growing techniques and are not necessarily ideal for amateur growers. If you grow like I do in high rainfall conditions with less than ideal rotation you are likely to get soil borne diseases so you are advised to select an old variety with known disease resistance. I would obviously recommend Symphony but not Centenary.

Apologies for the very long post but I thought it was an experience worth sharing.
0 x
My Weather
Top

Apologies for the very long post but I thought it was an experience worth sharing.


Geoff, very worthwhile sharing indeed.
From reading it I would say it is another case which suggests sticking with an older 'heritage' variety perhaps.

Mind you, given the amount of new variety strawberries that are offered to us amateur growers it is a bit disconcerting to read that they are not always actually suitable for the manner in which most of us grow.
How many of us have table top beds devoted to strawberries !

Hope you resolve your problem, sorry if it rubs salt in the wound but I'm happy to say we are having a bumper strawberry crop so far this year.
0 x
The danger when people start to believe their own publicity is that they often fall off their own ego.
At least travelling under the guise of the Pa Snip Enterprise gives me an excuse for appearing to be on another planet
Top

very interesting information Geoff, thankyou for sharing. We have had issues with strawberries for years, I can't remember the last year we had a bumper crop

I have started again from scratch this year, with strict rotation planned. Hopefully, we'll get a decent amount of fruits.

If not, I'll try some heritage ones and see how we go.
0 x
Top

That is very interesting! When we grew our strawberries...Cambridge Favourites...in the soil on the allotment, we had so many problems and never had a decent crop. Our soil is basically heavy though it is much lighter now, after all the good muck that has been added over the years. After a couple of years, we dug the plants up, potted them up and over wintered them in the cold greenhouse. Come spring the next year, they absolutely took off and thrived so well, we took them home. My husband built trestle tables round the patio and we kept them on there. We had a huge crop that year, so we carried on.

Each bucket is marked with the year so we can discard plants after three years. We feed them with Tomorite. We propagate new plants every year from the runners of the best plants and at one point, we had over 250 strawberry plants.

We didn't net them...birds didn't seem interested, (too close to the house?) the odd mountaineering slug or snail manages to do a bit of damage but not enough to speak of.

The only problem we have had to contend with is Vine Weevil larvae, which we treat with Nemasys nemotodes as soon as the soil warms up in Spring and again in September.
We have scaled it down a bit this year...the strawberries were taking over....my husband was getting obsessed.