by Primrose
Found this idea for making your own hoops if you want to use fleece or netting protection and want to build something which accommodates taller plants.

http://www.communigate.co.uk/here/orlet ... age6.phtml
by Angi
I have used water pipe for a few years now, but bear in mind that on a windy site they do blow over unless securely fixed with a cane/timber lath across the top.

by Ricard with an H
Other than this short thread I can't find any information about sturdy netting cloches, yes I can make a timber framed cloche that will withstand anything other that vandalism but I have so many jobs waiting I'm wondering if it's worth buying something considering the known frailties of hooped cloches.

I'm looking at a Haxnicks with galvanised steel hoops, is this 'same-old-same-old' hoops stuck in the ground and gathered at each end presumably pegged at each end.

Do I have to get my tools out ?

by Beryl
I bought these hoops from Plant Bells at the Wisley show. Having seen one of our fellow plotholders with them. They are really strong don't bend and with the loops for the cans the fleece, netting etc. doesn't sag.
Not cheap but well worth the money. I've used other metal hoops but these really are the bees knees..

by Ricard with an H
Thank Beryl, presumably it's canes pushed into eyes welded to the hoops ? that would certainly be more robust than just hoops stuck into the ground.

Last years home grown cabbage has been one of my great gardening joys but I'm growing for just me and I did get cabbage overload. I bought some spring greens last week and threw half away because they were grown big and tough. Last year I harvested most of my cabbage before it matured, it was lovely.

Do I really need to net brassicas?

If I buy some netting I need to buy enough for eventual uses in order to save on postage, then I have the cost of supporting the net. The net alone is £5 a meter, I need about 15 meters.

Cabbage isn't that expensive though my preferred cabbage is hard to find, tender green leaves and Nero-De-Toscana are my favored crop with just me to feed because she hates cabbage.

Dinner-ladies have a lot to answer for.

by robo
I bought 50 x 2 meters of scaffold netting from amazon I think it cost about £25 I ripped a load of timber into 2inch x 1 inch and made square frames to fit over my raised beds covered with the netting it keeps virtually every thing out, last year I lost all my sprouts and cauliflowers and most of my cabbages to caterpillars not so this year

by Santa_stunt_double
We've done something similar with enviromesh, rather than Builders netting, so we can use it over carrots etc. to stop the carrot fly.

Currently they're covering four beds of Cabbage and Cauliflower, 3ft x 8ft, 18" high. Once the cabbages grow above that it's replaced with hoops made with 4m Water pipe, held in place with builders steel reinforcing rods, and 4m wide mesh. The reason for this is that it's easy to move the wooden frame to weed in the early stages, the hoops need the mesh unpegged and rolled back, which takes more time.

Using tanalised timber, they've now lasted over 6 years - the only thing we need to do is occasionally re-staple the mesh in place as the staples rust, or the mesh is pulled off by the weight of snow (not an issue recently).

by Beryl
The hoops are twisted rather than welded Richard. Hoops with netting have been a must for us for brassicas not only for butterflies/caterpillars but the birds too Pigeons will strip a plant in minutes. I've not used builders netting but I am told it doesn't let it in the light like enviromesh does. If you can afford it I think this is the answer. I have several lengths that go in the washing machine each year. Whereas netting tears easily. Look upon it as a good investment.

by Ricard with an H
Clearly I need to use netting and yes it needs to be an investment rather than a consumable.

We already Have cabbage whites flying round looking for places to lay eggs so on the basis of your advise I'll buy netting or not grow cabbages if I can't afford the investment.

I'm amazed at the lengths you lot go to to produce crops, it's heartwarming. Ok, it's hard work for anyone though hard work is only part of it. When you loose crop in couple of hours that took perhaps two months since sowing seed then it's going to hurt.

I don't have as many pests as most of you but I do have strong winds coming right off the sea and a proven design in those timber cloches I built earlier in the year. I'll build two or three of those and cover them with the enviro mesh if it'll take stapling down with stainless steel staples.

by FelixLeiter
I've never netted Brassicas. Me, I find it to be a lot of expense and faff. Sometimes they can end up lacy, which is ugly, but with hearting cabbages the middle's nearly always intact, and winter greens grow out of any damage when autumn comes along and caterpillars die out. I've seen netted Brassicas get mauled by caterpillars — there's always a way in for the cabbage moth (as it's called in plant pathology circles), usually by laying eggs on leaves which touch the netting. Which isn't to say that I don't attempt pest control. Bacillus thuringensis is particularly effective biological control. The trouble with growing edible plants is that something else wants to make a meal of it before we do.

by Geoff
I surround my Brassicas with a windbreak fence - not as fierce as your winds but still enough to ruin them by spinning before they get established, it is also a second line of defence against rabbits. I then put binder twine between the posts and throw butterfly netting over and attach it to the windbreak with pegs. I can roll it back for the odd bit of weeding or tying up in there before I take it off for the Winter. I disagree that things like Sprouts and Sprouting Broccoli grow out of a bad attack of Cabbage White. I read this thread a bit late in the evening for a decent photograph but not too bad for 20:35 on a lovely evening. 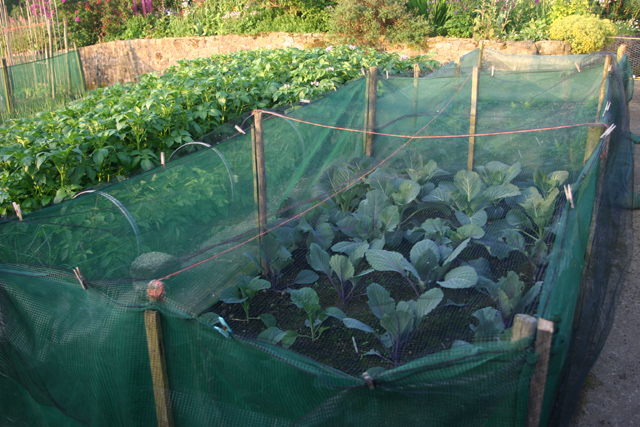 by Ricard with an H
Thanks for making the effort with a photo Geoff and thanks to Felix for illustrating his stand on brassicas.

I'm trying to grow cabbage for the leaves rather than the hearts and I only just learnt that eggs get laid through and onto the netting. What a nightmare.

So, I can't just lay-over. I have to have some sort of structure and I'll have to build one myself for cost reasons and more importantly for survival.

Right now I'm still hacking and digging to create my cabbage patch and my plants are all a healthy nine inches with strong roots. It seems such a shame to expose them to a wildlife that destroys them or even dump them for a more convenient crop.

I didn't get any eggs or creatures on my winter cabbage but I lost some to the wing, those that survived had lost a lot of leaf and were very distorted from being pulled about.

I will plant those cabbage plants now that I nurtured them to this stage and I will buy netting this week, how I deal with the structure to support the net has yet to materialize and I may have to improvise. I suppose the process of improvising and loosing crop as a result will be part of my learning curve though at least I'm armed with some advise.

by FelixLeiter
To support your netting, and prevent it touching the leaves as much as possible, you need nothing more than canes pushed into the ground at intervals with a plant pot inverted over the top of each.

by Ricard with an H
A huge thanks Felix, thanks for the time taken to illustrate my options.

Just to reduce my costs for this year I have managed to get some cut-offs of convenient length of blue polypropylene water pipe. Convenient lengths for the minimum radius before it wants to kink.
This means I just need to buy decent quality netting this year and next year I'll go for a suitable structure.

Today I achieved my 'Gold-standard' for spring onion. I pulled small Red Barron as spring onions to eat with some cheese. What an absolute treat. The reason I've shared this is that the effort is small compared to the result in this case, and the biggest risk would have been not taking the risk. (Favorite saying)

She is now swerving to avoid me because I stink of onion.
All times are UTC
Page 1 of 5
Powered by phpBB® Forum Software © phpBB Limited
https://www.phpbb.com/