I have a mowing dilemma.

My 30” ride-on mower (Hayter Heritage 13/30) is giving me some grief. I’m losing traction which I’m guessing is a main drive belt issue. I have tried adjusting the clutch, with difficulty, but with little success. Unless I put it in the lowest (very slow) gear it won’t get up the slightest slope, and some of my slopes are rather more than slight. I have a full manual and the description of how to change the belt looks quite difficult. I could spend approaching £30 and end up not managing it.

The next option is to get somebody to do it for me. The guy I bought it off 5 miles away has ceased trading and the options are now approaching 20 miles away so the collect and return part of the bill will be significant, I don’t have access to a way of taking it. I don’t see the work being cheap either. I bought it at the start of the 2006 season so the collecting bag is wearing out and a new blade would be good so spend significantly on it or replace it?

But what to buy, not spending silly money will have to be significantly below £2,000. I have had two similar machines, both single 30” blades with lift off collecting bags, but neither have been great for damp grass. I like the bags because I compost quite a bit of the grass and I can tip it in the bins or wheelbarrows. The machines that advertise picking up in damp conditions seem to be twin bladed but have tipping type emptying mechanisms, I can’t drive to near my bins.

Does anybody have any experience of say tipping onto a tarpaulin then bundling it up to add to the compost, or have any other clever ideas?

Any experience with manufacturers would be helpful, I seem to be looking at MTD, Lawnflite and other rebadging (Lawn King?) of the same machines. Buying off the internet looks possible but that will leave me with two machines.
Last edited by Geoff on Tue Apr 24, 2018 7:18 pm, edited 1 time in total.
0 x
My Weather
Top

Hayter's factory is two miles from me, but they are now wholly owned by Toro and no longer do ride on mowers.
0 x
Do not put off thanking people when they have helped you, as they may not be there to thank later.

Bit disappointed nobody could offer me any advice.

Went on a tour of potential repairers and suppliers. If I decided to replace to improve damp weather pick-up the advice is firmly twin blades and a tipping collector rather than a lift off bag so I would have to invent a way of getting it to the compost heap. Choosing a model more difficult. I did discover why so many look alike; Global Garden Products own Stiga, Mountfield and Atco. All the MTD, Lawnflite, Lawn King and few others look the same but haven't proved they are also GGP. Just about settled on either a Stiga or a Mountfield on offer at Screwfix but couldn't bring myself to spend the money.

Repairs was another discussion. One 15 miles away would charge £42.50 per hour for collection and return which I guess would get me over £100 with no work done. Wouldn't estimate time / cost to change belt but would expect a total of £250-300 (mind I think he was preferring to sell me a machine). Found somebody else was using the premises 5 miles away and would collect and return free but wouldn't estimate cost of a belt change or lead time, also said it could be the axle rather than belt that sounded expensive (and would he do it anyway?). So I bit the bullet and took it apart myself. Proved the belt was knackered (and an idler pulley) so hopefully they are the cause, both on order £40.50. So in a couple of days if I can remember how to put it all back together I might be mowing again. 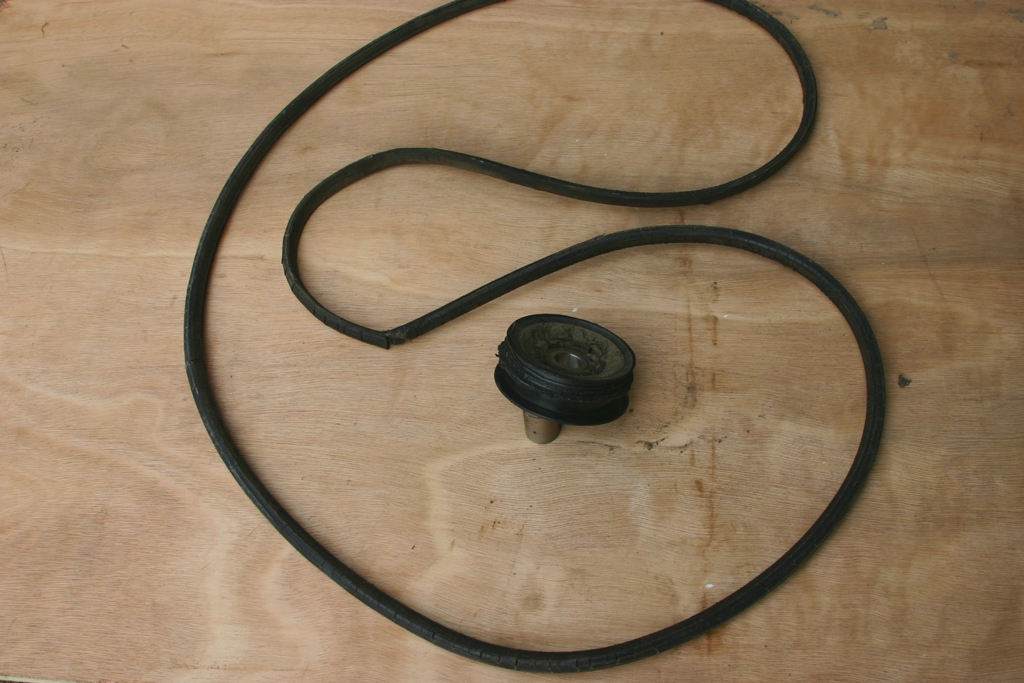 Hope you have found the economic solution Geoff, I hadn't replied as I have had no previous experience with a ride on, I just sat here in awe and envy of anyone who had that much manicured lawn
0 x
The danger when people start to believe their own publicity is that they often fall off their own ego.
At least travelling under the guise of the Pa Snip Enterprise gives me an excuse for appearing to be on another planet
Top

Good morning Geoff, I do apologise for not replying, (especially as you try and put an answer to most questions), had no internet here for 48 hours.....But with the massive prices that seem to come with repairing machinery these days, I think you have done the best thing with trying to have a go at the repair yourself, especially as it's an older machine. I do hope you manage to get it sorted.
1 x
Kind Regards, Old Herbaceous.

that much manicured lawn

That I haven't got, no lawn just grass with lots of moss and rushes!

Thanks OH, now just waiting on the post, belt was supposed to be here yesterday as I ordered it before I dismantled. Paid extra for 24 hour service on the pulley so hopefully I'll be busy (in the rain) this afternoon after our 2:00 pm post.
0 x
My Weather
Top

Not having a good week!
While I was waiting for the spare parts and as the forecast rain hadn't started I decided I would strim round my trees ready for the anticipated mowing. Haven't used the strimmer yet this year so you can work out the rest!
Got fed up with 2-stroke strimmers and manufacturers refusing warranty claims on the basis of incorrect mixture so in 2016 I purchased a 4-stroke. It has been excellent, starting and running really well. Today it starts almost immediately as usual but as I start to reduce the choke it accelerates as usual but reducing the choke further stops it. Holding it with the choke only partially reduced it does run for a while but it eventually stops. If I then re-prime it I see air bubbles in the tube. I have given the fuel tank a good shake and changed the fuel but that makes no difference. I ran it to empty at the end of last season and the fresh petrol was only purchased two days ago.
I've asked Einhell for advice but am waiting for the inevitable reply that says take it to a service agent. Any ideas please?
0 x
My Weather
Top

Perished plastic somewhere in the fuel feed.
Check the sealing washers and plastic tubes.
If you can't find anything that looks leaky then there's probably trouble in t'carb.
0 x
Do not put off thanking people when they have helped you, as they may not be there to thank later.

Thanks, I've ordered some.
0 x
My Weather
Top

What a joy it was to mow some grass this afternoon. Drive belt finally arrived about 1:30 (ordered last Tuesday and paid extra for 1st Class!). Wasn't encouraging when I fitted it as it seemed quite slack but it worked a treat. Hopefully finish the rest tomorrow, got to go out this evening. Just the strimmer to tackle now.
3 x
My Weather
Top

Back on 'badge engineering'. The Hayter mower I have was manufactured by Murray in America. Because I thought the belt was mission critical I ordered an original equipment Murray belt even though it was more expensive. It came with Murray and Briggs and Stratton labelling.
0 x
My Weather
Top

Carb cleaner came today but I'm not sure how to use it. Do I just remove the air cleaner and squirt some in then start it.

Thought I would wait and see what the manufacturers said. Emailed them last Thursday but didn't get a reply so I sent it again today asking if they would respond if I said I was sending it back under warranty. I said:

I am trying to use it today for the first time this season and can’t get it to run, I have had no problems previously.

At the end of last season I ran it to empty as I usually do and I have filled it with fresh petrol purchased two days ago.

It starts very easily as usual with full choke, as I start to reduce the choke it accelerates as usual but reducing the choke further stops it. Holding it with the choke only partially reduced it does run for a while but it eventually stops. If I then re-prime it I see air bubbles in the tube. I have given the fuel tank a good shake and changed the fuel but that makes no difference.

Any advice would be appreciated.

By the way there are two oddities in the manual:

1. Section 8.6 it mentions oil change but doesn’t suggest a frequency but says “read the service section” – there isn’t a service section in the manual.
2. Section 9.1 Storage. It says run the fuel empty as I have been doing but then suggests adding 2-stroke oil to the combustion chamber, that I haven’t been doing. Later in that section it talks about filling the tank with the relevant mixture of fuel and oil so I think this section is from a 2-stroke manual and hasn’t been edited correctly.

My second email did generate a reply:

How long have you had this machine for please?

I would have thought that the ability to read was a prerequisite of working in customer service.
2 x
My Weather
Top

If it runs on choke start it I don't bother removing the filter ,start of with a quick light spray as it will stop the engine then give it a good spray
0 x
Top

Played about with carb cleaner and it runs on idle with no choke and accelerates with each burst of cleaner but if I try to use the throttle it stalls. I guess it is a fuel restriction but as it is under warranty I've raised a claim.
0 x
My Weather
Top
Post Reply Previous topicNext topic
21 posts